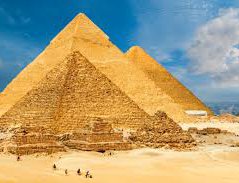 The number seven is a magic number in Greek and Hebrew cultures.  It is so in our culture too in that a group of stars seen in the sky have been known as Sapta Rishi group. Of course the Western world refers to them as the Seven Sisters.  It was these same stars in the sky that guided the thinkers and travellers of the past.

In the places where Christendom prevailed, one talked about the creation of the world and that God brought this about in six days and rested on the seventh or Sabbath.  This was the origin of the seven day week.  The people who gave great importance to such beliefs were the Seven Day Adventists.  In those days and age, people were warned too of the seven deadly sins which were pride, lust, envy, anger, covetousness, gluttony and sloth.

In later eras, when it was difficult to travel the roamers of the world did so on land and even perhaps crossed the Seven Seas or oceans to return and tell tales of what they had seen.  These Seven Wonders of the Ancient World, all Saath Samudra Paar, were first described by the Greet writer Antipater in the 2nd Century. These were: the Colossus of Rhodes, the Pharos of Alexandria, the Hanging Gardens & Walls of Babylon, Artemus of Ephesus, the Pyramids of Egypt, the Tomb of Mausolus and the statue of Zeus at Olympia.  However, in those times it was difficult for those who heard these tales to visit these sites.

Later, with faster and surer forms of travel and communication, people could go further afield, see newer places on earth and describe these.  These new sights became more talked about as more people traveled around the world in greater numbers.   A global vote was taken in 2007 and was much publicised in 2017 as the New Seven Wonders of the World.  These are: Taj Mahal of India, Ancient city of Petra in Jordon, Coliseum in Rome, Inca ruins at Machu Picchu in Peru, Ancient Maya city of Chinchen Itju in Mexico, Great Wall of China and the 38-meter statue of Christ in Rio de Janeiro.

The word seven has magic connotation.  Our religious heritage Mahabharat talks of King Bharat of India and of the Sapta Rishis.  The Mohammedans have their Seven Heavens and whilst Adam and Eve live in the first one it is Abraham who lives in the seventh.  Other societies have classified being in Seventh Heaven as living in a state of great pleasure.  Shakespeare in his comedy 'As You Like It'  describes a man's lifetime as seven stages of man which are: Infant, whining schoolboy, lover, soldier, justice, old age & second childhood.

The Seven Brides for Seven Brothers film and the subsequent Amitabh Bachhan starrer Satte pe Satta, brought a rehashing of this story to our part of the world.  This is an interesting analogy for in the Western culture the seventh son of a seventh son was held in great esteem and destined to be a notable individual.  Sadly none of this possible in this twenty-first century with the advent of family planning and nuclear families!

As time progressed the thinkers of that time made September and October the seventh and eighth months of the year which then customarily started with March as the first month.  The later adoption of January as the first month of the Western year created some disturbances.

This rule of seven seems to have been followed in Nepal too in that we have seven provinces in the country and will soon have seven provincial capitals.  It may of interest to many Nepalis that even the Japanese with whom we have many connections also have their Gods of Luck who are: Benten, Bishamon, Daikoku, Ebisu, Fukurokoji, Jojorin, and Hotei.

It has been a known fact that the late leader of Burma, now Myanmar had a great fascination (whether genuine or not) when he authorized the issue all of the new banknotes in the country to be in multiples of nine only.  Only a certain amount could be exchanged and those with bundles of cached or hidden currency notes were left in the lurch.  This also recalls reminisces of Narendra Modi to mind.  Finally, this also brings to one's mind the query as to whether Sher Bahadur Deuba is a believer in such mystical matters.  The social media and some papers carried the news that he had been told that he would become on seven occasions, the prime minister of this land.  Was it this belief that prompted him to authorize the Federal and Pradesh elections to be held on December 7 - a decision that led to an almost complete rout of the Nepali Congress on this occasion?   Is the fact that the PM has directed the Rastriya Sabha election to be held on 7th Feb. proof that he still has some faith in his belief?

Following the swearing in of the seven governors of the seven provinces on 21st January 2018, the stage has now been set for further developments.  A host of other appointments, all in batches of seven are due to follow one after the other in the coming days.

But all seven connotations may not be factually beneficial.  It is claimed by many that there is in many married lives a seven-year itch when both partners feel an urge to deviate from the straight and narrow path!  Be aware and beware of this.