There are many ways to classify society into groups to understand it. But from the political standpoint, regardless of the time, there are always two predominant groups or social classes: the oppressed and oppressors 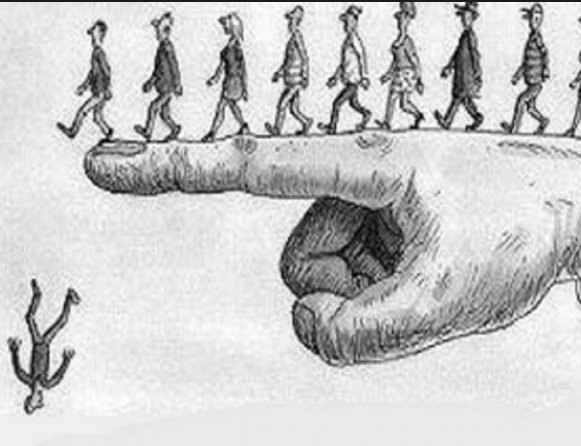 A man without his own opinion, without a spine, subordinating himself to others is a conformist. Conformism is the process of social influence by which a person modifies feelings, opinions and behaviors towards the position held by the majority group, as a result of physical or symbolic pressure exerted by a group leader or defined by the group itself.

There are many ways to classify society into groups to understand it. But from the political standpoint, regardless of the time, there are always two predominant groups or social classes: the oppressed and oppressors. Regardless of the political regime, there have always been people favored by the political-economic system in which they lived, and the fact of seeking to maintain that hegemony over the less privileged ends up turning them into oppressors through the use of force, fear, social or economic contract.

Therefore, appending the term conformism obtains results in a society afraid to express thoughts, ideas and opinions. It would be well with what you can offer them, keeping simple basic interests when they could find a complete well-being.  It comes from the fear of change, i.e. they are afraid to try new things having no choice.

Instead of looking for a way to get ahead and look for new goals to have a better future, we prefer to stay wherever we are. We only know to complain and to deny. Our society considers that a conformist is influenced and incapable of defending their ideas but these very people are doing good.

The path most followed is always assumed as the right path. This is the powerful drag of conformism in society. You cannot fully trust those who say and do what they think is right if all those around you express a different opinion. This is because of the drag of conformism in society, whether conscious or unconscious, is simply too strong. But, sometimes, the path less followed may be the right path.

Social conformism is a collective behavior inhibiting consciousness, and limiting the will, which ends in a state of self-indulgence. Social conformism creates a society of cowards, satisfied people, submissive and who do not want to endanger their status quo. The educational system has its responsibility in the formation of systemic thinking; we attend an education based on "compliance and discipline to the internal dynamics of the system." The role of the media is also important. "Journalists informed but not trained, sociologists without sociology, historians who do not know history, inquisitive psychiatrists without moral values, doctors and engineers" and "yes, public opinion creators, editorialists and disseminators." You must be a message receiver for consumption "for that creates a cheer, that receives salaries, gifts, lobbied distinctions;" we are in a social circus of the absurd and the complicity of the status quo.


It seems that society is also blind and a little deaf.  It does not want to see, but it does hear the partial voice of the one who informs him and taking leave of all common sense, it gives credit to the paid informants of media, who tell him that everything is going well and that we are wonderful.

But I wonder again how it is possible that the society with everything that has happened still creates the political elites who inform him that the everything in the country is going well; and do not use your other senses to sense the reality that surrounds you and realize that there is a basic contradiction between the official discourse and the one you see in the scenario of which it is a part, with fewer and fewer resources in your pocket and day by day with more difficulty to acquire with his salary every month - if he has one.

Actually, none of these matter to the individual. What really matters is that the mind never remains idle, that it is always working on something new. It is to this eagerness to create, to always do something more, something better, to what we call ambition, and to the person who practices this way of living.

We are the conformists so we try to make the minimum effort and that deprives us of the authentic and noble satisfaction of feeling with the duty fulfilled. We are a passive, hypocritical, conformist, uninformed society that floats within the zone of comfort and we prefer to stay in the role of spectators.

For reasons of corruption, insecurity, lack of transparency and accountability, as key factors, a majority of Nepalese do not want to know anything about the government or the institutions. We simply do not believe in them. Today's societies are technological, individualistic and materialistic, where people look for ways to give their families a better quality of life. So this leads us to say that to succeed in today's world, people must have a series of qualities and attitudes to be able to succeed as they are: to know two languages, to have a postgraduate degree, to be an entrepreneur, to have work experience, among other qualities.

The defensive and conformist attitude makes people slaves of people who want to take advantage of this weakness, that is why autonomy, freedom, prosperity and peace of a people is not achieved by forgiving criminals, nor can it be achieved without complaining or protesting against a bad government. It is not achieved by conforming and without seeking a way to improve.  We must leave conformism to one side if we want freedom, justice and sovereignty. Though we must give spaces to a defensive attitude in favor of peace and tolerance but also has to react to not allow them to take advantage of good faith.

It is important that we leave aside the mentality of blaming others for our lack of commitment at the time to exercise our right to choose who will represent us. We must be active members since we live in a society and we are part of that whole and by failing to get what belongs to us, does not allow for progress, but it leads us to be a conformist and mediocre society.

This society teaches you to be conformist, not to think with enthusiasm. Conformity plays a very important role in the stabilization of cultural norms. Conformism is dangerous because it creates false attitudes, beliefs and ideals - as in the individual, and in a certain group of people.

Conformists who lack in principles, their personal view of the world, the nature of things and relationships are often victims of various sects and anti-social groups. These people almost always follow the opinion of the majority. They are very easy to manage, to subordinate the will of another.  Conformists do not have a moral core. They are dangerous to society that if there are many such people society degrades to a community of slaves, ready to passively comply with all orders, directions of the person in power. Conformity destroys individuality, significantly reduces its ability to make of any significant contribution to the development of science and art, as is the brake, stop the truth and new ideas.

A dormant society is a sick society. Conformism is the plague of our society. To solve this problem, we must encourage and strengthen the values and further raise awareness that we are worth as individuals and as a society. Be clear that we are a fundamental part of what happens to us and around us. Values are important as are the foundations that will lead to the development of a society with more resources to develop.