Sushma Swaraj’s visit is seen differently in Delhi and Kathmandu 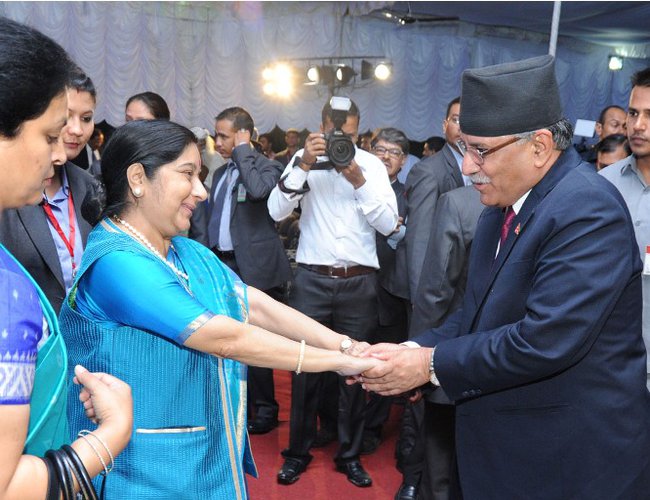 Sushma Swaraj spent less than 24 hours in Nepal. Most of it was expended on assuring political actors — in the government and the Opposition — that India has no interest in Nepal other than see it turn politically stable and prosperous. But, clearly, the perceptions about her visit are different in Nepal and India. That a senior minister visited Kathmandu, without even waiting for the formation of the new government, shows some urgency in New Delhi to mend fences. India has also reached out to K P Oli, leader of the Left Alliance and chairman of the Communist Party of Nepal-Unified Marxist Leninist, who it believes has pushed Nepal closer to China, especially in the past three years.

The Nepali side believes that Swaraj’s was more of a political visit. The Nepali Congress, which heads the caretaker government, feels undermined that Narendra Modi directly dealt with Oli and dispatched Swaraj ostensibly to “congratulate Oli personally, and invite him to Delhi at the earliest as Nepal’s New Prime Minister”.

But politics and diplomacy may not appear as straight as they seem. India knows that Nepal is geo-strategically and traditionally too important for it to lose to China and that it will have to deal with Nepal no matter the political set up there. Nepal’s political instability is far from over. The instability and lack of ownership of the constitution is largely due to the denial of space to traditional political forces, a factor that external actors including India refuse to acknowledge. During the past 12 years, India and other external actors aligned with forces that raised arms against the state to push for a radical change in politics in preference to an evolutionary process accepted in other democracies. With the influence of traditional forces waning, the rise of communists is only natural. India will have to accept the mandate of the Nepalese people and deal with the left leadership.

Almost every high-level visit to Kathmandu from Delhi and vice versa has political significance. Swaraj’s visit is no exception. Mending relations with Oli, who may take over as prime minister in March, may provide an opportunity for Modi to visit Nepal, the third time since he became the prime minister and the first after the blockade. If Modi travels to Kathmandu, say ahead of the Chinese premier, Xi Jinping, it could be interpreted as Delhi restablishing its sphere of influence in Nepal. But there could be many a slip between the cup and the lips. Oli will need to strike a delicate and pragmatic balance between his perceived anti-India, pro-China image and relations with India. After all, Oli is not the sole political actor in Nepal.

Three weeks after his trip to Lucknow and meeting with UP Chief Minister Yogi Adityanath, the former king, Gyanendra Shah, will be a special guest in Odisha on the occasion of the 25th anniversary of the advent of Nischalananda Saraswati as Jagadguru Shankaracharya of Puri Mutt. The issue of secular Nepal vs Hindu kingdom continues to be a part of the ongoing political tussle in Nepal and the former king seems to rally forces in Nepal and India on the issue, even a decade after the abolition of monarchy.

In a video clip widely circulated on social media, Maoist Chief Pushpa Kamal Dahal asserts that communists and Christians are the same as both fight feudal oppressors. This has given credence to allegations of the protagonists of “Hindu Kingdom” that Nepal’s transition to a secular republic was an agenda “funded and influenced” by external forces including western donors. The former king misses no occasion to blame outsiders for destroying Nepal’s indigenous culture, history and civilization. Dahal’s response to the former king is: So what’s wrong with it.

There is an influential opinion in India that wants Nepal’s secular and republican status reviewed. For instance, Yogi Adityanath, who has been vilified by a section of the Indian establishment including the Indian embassy in Kathmandu, and the likes of the organisers of the Puri event. Whether Swaraj discussed the contentious issues in the Nepali Constitution during her meeting with Oli or the two only talked about burying the past and moving ahead together is not clear as yet.

US President Trump To Arrive Today In India For Two Days Visit By NEW SPOTLIGHT ONLINE 4 days, 22 hours ago