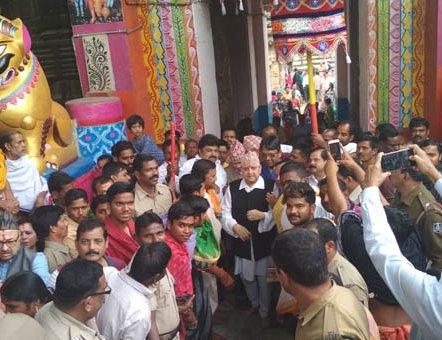 According to Indian media, King Gyanendra entered the 12th-century shrine in the seaside pilgrim town along with Gajapati King of Puri Dibyasingha Deb through the south gate after the latter went in and performed the puja.

"I prayed for peace across the world," the last Nepal king said adding that he also prayed for the strengthening of friendly ties between his country and India.

The Shri Jagannath Temple Administration (SJTA) had made special arrangements in view of the visit of the Nepal king. The temple remained closed for devotees for around three hours for the smooth conduct of rituals by him.

The king of Nepal has the special privilege of performing 'aarti' of Shree Jagannath atop the 'Ratna Singhasan' (Podium).

The king of Nepal has special seva and rituals in the three important shrines like Shree Jagannath Temple at Puri, Lingaraj Temple at Bhubaneswar and Sakhigopal Temple at Sakshigopal.

The deep spiritual ties between Odisha and Nepal are held in great reverence by the king. Adi Shankaracharya had established the rituals and practices in both the Jagannath and Pashupatinath temples. Nepal comes under the spiritual jurisdiction of the Puri Shankaracharya s Govardhan Math.

Nepal's former king attended the silver jubilee of Shankaracharya Swami Nischalananda Saraswati's pattabhisheka on Saturday. Chief Minister Naveen Patnaik, who for the first time visited the ashram, said: "Jagadguru Shankaracharya is the most respected guru in the Hindu culture of Guru tradition."

He said: "Shankaracharya guides in spreading spiritualism in the society."

Shankaracharya, in turn, honored the chief minister by presenting him a shawl. Naveen also released Ganita Sastra, a book on mathematics authored by the Shankaracharya on the occasion.