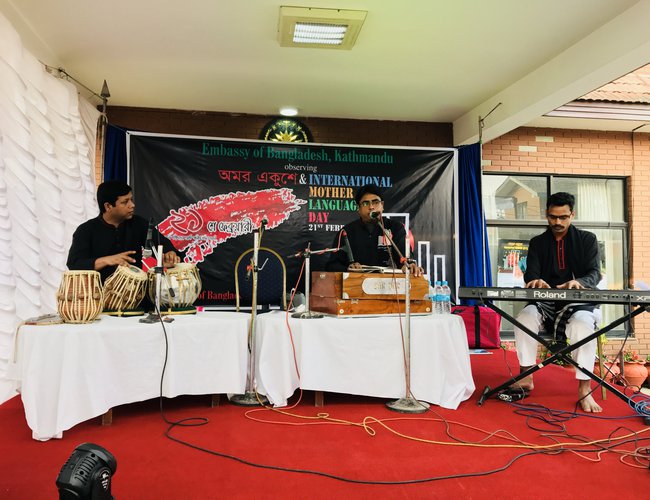 The day’s program began with the hoisting of the national flag at half-mast at the Chancery by Ambassador Mashfee Binte Shams. This was followed by placing of floral wreaths on the Shaheed Minar followed by an observance of one minute’s silence as a mark of respect to the Language Martyrs.

A ‘Doa Mahfil’ was also held in the morning at the Chancery where all present prayed for the eternal peace of Language Martyrs, Bangabandhu, members of his family and others who had been sacrificed their lives for language and the country.

According to a press release issued by Embassy of Bangladesh, the second part of the program was organized with a performance of Bangla patriotic songs by noted Bangladeshi artists Bizon Chandra Mistry and Jhuma Khandaker who presented a mesmerizing show rendering selected songs.

This was followed by a performance by Nepal Bhasa Parishad in which renowned Nepali poets recited a poem in different languages of Nepal. A special Nepali trio song was performed by Bangladeshi artists Bizon Chandra Mistry, Ms. Jhuma Khandaker and Nepali artist Kishore Kumar Sharma Sedai. The day’s program was concluded by the vote of thanks and concluding remarks by an ambassador of Bangladesh to Nepal Mashfee Binte Shams.

The day’s program was widely attended by the Ambassadors, diplomats, officials of Nepal government and SAARC Secretariat, members of the expatriate Bangladeshi in Nepal, Nepalese dignitaries and political leaders, members of the civil society and representatives of the print and electronic media.

Earlier in the day, Ambassador Mashfee Binte Shams attended the inaugural ceremony of a seminar on “Preservation and Promotion of Mother Languages” organized by the Language Commission of Nepal as the Guest of Honour. She also attended a seminar organized by the Nepal Academy to commemorate the International Mother Language Day on 20 February 2018.

Prohibitory Order Imposed In Rasuwa For A Week By Agencies 2 days, 5 hours ago

Nepal Has Suspended All International Flights By May 31 By NEW SPOTLIGHT ONLINE 2 days, 16 hours ago

DAOs Extend Prohibitory Order In Kathmandu Valley Till May 26 By Agencies 2 days, 22 hours ago