With over 11,000 Nepali students currently enrolled in higher education in the U.S., we are looking forward to a new generation of young people contributing to the ever-growing network of people-to-people ties 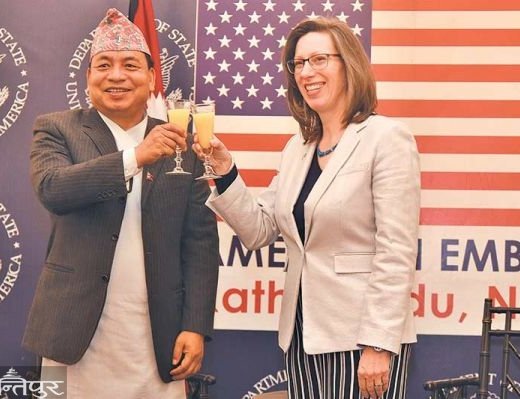 Together, the United States and Nepal have supported global peace and stability; enhanced public health, education, and food security; shared best practices in democratic governance; and increased and diversified the economic, research, and artistic linkages that connect our two countries.

Today is a day to celebrate those advances and to re-commit ourselves to achieving even greater results in the future for the mutual benefit of the people of Nepal and America.

While my team and I at the Embassy work closely with the Nepali government – and we look forward to a strong and productive partnership with the newly formed government – these official interactions are just one small component of the U.S.-Nepal relationship. In fact, I see our role as one that makes it possible for our people to engage with each other directly.  It is these people-to-people connections that truly define our relationship. Let me give you some examples:

Deerwalk, Inc. is an American technology company that works on healthcare analytics and population health management. The company currently has about 30 employees working in the U.S. and over 10 times that many here in Kathmandu.  Purnaa, a Nepali company that manufactures high-quality, sustainable products, recently started exporting fair-trade fishing flies to stores in America.  And, the Robbins Company’s Tunnel Boring Machine is digging a tunnel to divert water from the Bheri River to the Babai River. The project will generate 48 MW of electricity, and provide water to irrigate nearly 200 square miles of land in the Terai, to boost rice output in western Nepal.

These business endeavors offer just a snapshot of the technology transfer, innovation, and commercial connections that are creating jobs in both of our countries. These partnerships hold the keys to revolutionizing the transportation, infrastructure, agriculture, and tourism sectors while bringing our people closer together.  The new government’s commitment to prioritizing reforms to attract investment and facilitate trade can attract even more American businesses to invest in Nepal, leading to new products, made in Nepal and sold around the world.

On the academic front, Johns Hopkins University’s School of Public Health made a breakthrough medical discovery that treating newborns’ umbilical cords with chlorhexidine reduces an infant’s risk of infection and death during the first weeks of life by as much as 20 percent.  Their research – which took place right here in Nepal – has become a global best practice and is used in scores of countries.

But it is not just companies and organizations that make these people-to-people connections. There are also thousands of individuals from both of our nations who work toward a more stable, prosperous and democratic Nepal every day.

People like Kiran “Ron” Sitoula, the Deputy Mayor of the town of Indian Head, Maryland in the United States. He is currently working with both the University of Maryland as well as local governments here in Nepal to develop a free, online course on good governance which will be available in Nepali for the country’s newly-elected local officials.

With over 11,000 Nepali students currently enrolled in higher education in the U.S., we are looking forward to a new generation of young people contributing to the ever-growing network of people-to-people ties. We hope these students receive an outstanding education and return to Nepal to contribute to their communities in Nepal -- and find ways to build on the seeds of partnership that started with attendance at a U.S. university. Today’s students will hopefully follow in the footsteps of the founders of the Center for Molecular Dynamics, Saral Urja, the Samriddhi Foundation, Medication for Nepal, and Leapfrog Technologies, who all did just that.

Our partnerships do not need to grow only from business or academic connections:  tens of thousands of Americans visit Nepal each year as tourists.  In fact, visitors from the U.S. are the third largest group that Nepal hosts every year, with over 79,000 coming last year alone. At a minimum, these visitors go home raving about the natural and cultural beauty of Nepal, spurring future waves of tourists.  Others are like the late-Elizabeth Hawley, who lived in Nepal for nearly 60 years and became the unofficial chronicler of every single expedition from Nepal in the Himalayas. They come as tourists and end up spending a lifetime contributing to the rich fabric that is our bilateral relationship.

Our future will surely offer even greater opportunities to collaborate, innovate, and secure the prosperity sought by Nepalis and Americans alike. There are many challenges ahead – issues our governments can tackle together, such as fighting corruption, improving the investment climate, and supporting human dignity and development.  Our peoples, though, are important partners and leaders in solving these and other problems. And it is these people to people connections, that I hope we can celebrate most strongly this afternoon.

Alaina B. Teplitz is the United States Ambassador to Nepal

Why To Regulate Electricity Sector In Nepal? By Dr. Ram Prasad Dhital 5 days, 5 hours ago