MINUSCA Honors 120 Nepalese Peacekeepers At The End Of Their Mission

They are deployed throughout the territory of the Central African Republic. They patrol, conduct investigations, ensure the responsible conduct of MINUSCA civilian and uniformed personnel on the roads and in their areas of assignment. 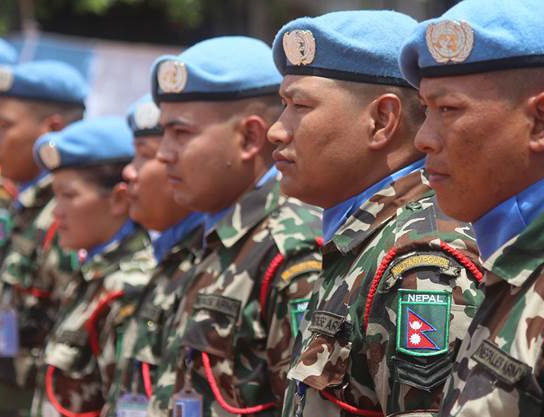 120 Nepalese military police officers received the United Nations Medal in recognition of their contribution to the success of the mandate of the United Nations Multidimensional Integrated Stabilization Mission in the Central African Republic (MINUSCA).

They are deployed throughout the territory of the Central African Republic. They patrol, conduct investigations, ensure the responsible conduct of MINUSCA civilian and uniformed personnel on the roads and in their areas of assignment.

The ceremony was held at their Bangui Mpoko base, in the presence of the Special Representative of the UN Secretary-General in CAR, Parfait Onanga-Anyanga, the Force Commander, General Balla Keita, the director of the Mission Support Division, Milan Trojanovic, and his deputy, Emmanuel Agawu, as well as representatives of the civilian and military entities of MINUSCA.

"Nepal has played a major role in the Force's military police since 9 March 2015. There is only one contingent deployed in 10 detachments covering the entire mission area of ​​responsibility," said the commander of the contingent, Lieutenant-Colonel Gaurab Gurung. With 12 hours of daily preventive patrols in Bangui and 10 in other detachments, the military police are also "in charge of ensuring that military and civilians respect the mandate of the mission. In addition to their conventional duties, they are actively fighting the problem of sexual exploitation and abuse," said Lt.Col. Gurung.

"It was important to recognize the quality of the service and the professionalism with which they performed their tasks," said Special Representative Onanga-Anyanga. Indeed, "despite their small size, they are an indispensable unit of the Mission and ensure the control of the behavior of our personnel. They also have the responsibility to ensure that the MINUSCA personnel drive the vehicles responsibly. As you know, road traffic accidents are the leading cause of death in peacekeeping missions. Since this responsibility has been given to them, they have contributed enormously to reducing the number of road accidents and to ensuring that our staffs behave on the road in a responsible way on both urban or rural areas, "said the Head of MINUSCA.

For the record, Nepal has been an active participant in UN peacekeeping operations since 1958. The Nepalese army has served in 42 UN missions. The country is the sixth largest contributor of military and police personnel to the UN with 4,834 soldiers, including 130 women, now serving worldwide.

Japan To Celebrate May 26 As “Hirotaka Takeuchi 14 of 8000m Mountains Summit Day By NEW SPOTLIGHT ONLINE 12 hours, 33 minutes ago