Afghanistan boosted their net run-rate to 0.038 winning the match with 11.2 overs to spare 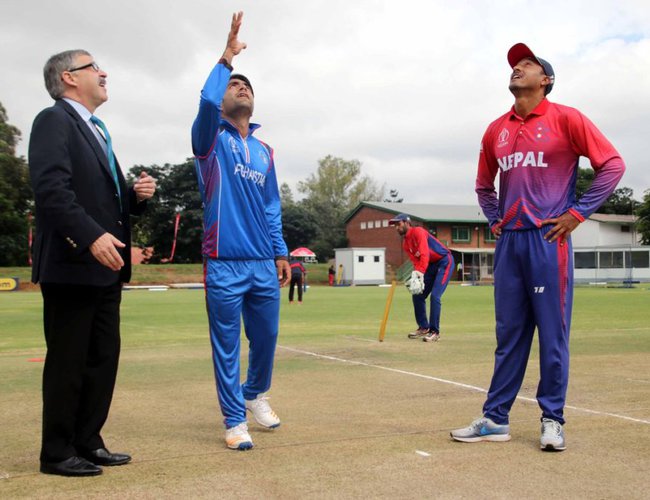 Nepal have suffered a six-wicket defeat at the hands of Afghanistan in the ongoing ICC World Cup Qualifiers match on Saturday.

With the third consecutive loss, Nepal’s hope of securing their berth in super-six has become slimmer. Nepal had faced defeat to hosts Zimbabwe and Scotland in their first two matches.

At Bulawayo Athletic Club in Bulawayo, Zimbabwe, Nepal won the toss and chose to bat before making a total of 194 runs losing all the wickets in 49.5 overs. In reply, Afghanistan reached the target losing four wickets in 38.4 overs.

Earlier chasing the modest target, Afghani openers had made a moderate start to the innings as captain Rashid Khan and Javed Ahmadi created a 28-run partnership for the first wicket. Khan made 14-ball 21 while Ahmadi contributed 26 runs.

Nepal could not make a strong start to the innings with openers Gyanendra Malla and Anil Kumar Sah managing to forge 13-run partnership only for the first wicket. Sah who replaced Dilip Nath in the team was dismissed for seven runs while Vice-Captain Malla scored 23 runs facing 94 deliveries.

Likewise, Aarif Sheikh was another notable contributor for Nepal as he struck 23 off 42 balls and his innings was studded with three fours.

Mohammad Nabi was pick of the Afghani bowling as he claimed four wickets and was supported by Rashid Khan who added three wickets. Likewise, Shapoor Zadran and Mujeeb Rahman bagged two and one wickets respectively.