In Sagachowk of Sindhupalchowk, 35 mud houses are being retrofitted in three villages as part of the project’s first phase 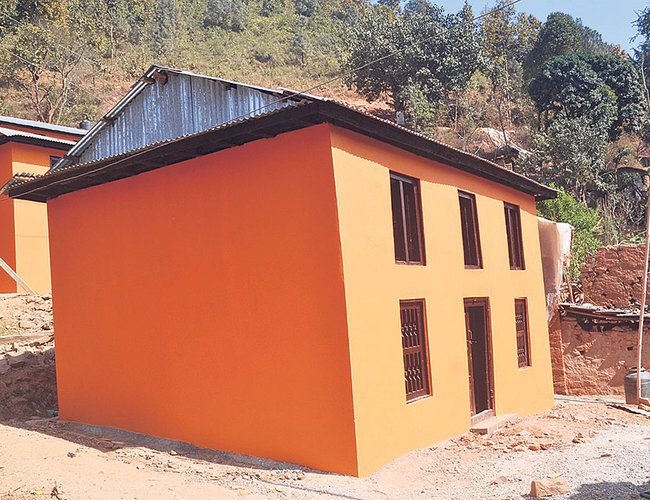 In the course of building new house, many earthquake victims in Sindhupalchowk have been indebted. Most of these victims claim that the grant provided by the government was too less to erect new house or repair the old one. Most of the locals were skeptical about retrofitting, when it was proposed earlier. However, now they seem to have understood its effectiveness and economic efficiency.

“There are many houses around here which are badly damaged. People have not been able to build new nor repair the old one. The reconstruction process is slow and it is going to take long time to get things into shape,” noted Nikesh Maharjan, an engineer with the World Vision International, who has specialization in retrofitting. “But as retrofitting is very economic and quite effective, this could help a great deal in expediting the reconstruction process. Unlike in the past, now people are able to understand its benefits,” he added.

According to Maharjan, the concept of retrofitting had not impressed the quake victims when they were initially approached with the concept. They aspired to building entirely new house instead of retrofitting the old ones. “They felt that retrofitting is going to cost them even more in the long-term arguing that a retrofitted house would not last long.

Maharjan stated that the National Reconstruction Authority (NRA) has certified retrofit designs prepared through the involvement of retrofitting experts including some professors from the Pulchowk Engineering Campus. The designs were framed and finalized after doing all the necessary homework, he said.

Along with that the house is given extra strength by adding additional pillars wherever necessary,” he said while attempting to explain the difference between repairing and retrofitting.

Retrofitting of damaged houses is now going on fast pace in the district and spreading to other quake hit districts too, Maharjan said. “In our first stage we introduced the technology in Sindhupalchowk. It has been received well here and now we are expanding the service to Kavre, Dhading and Makwanpur, among other districts,” he said.

The program is working as joint initiative between the concerned local authority, World Vision International, Pulchowk Engineering Campus and Gramin Nepal Kalyan Sangh. The biggest benefit of the retrofitting technology is that even poor earthquake victims, who cannot afford to build a new house, could get better house to live in just by retrofitting their old houses.

“The government provides very little amount for constructing new home and these funds too do not come on time. In such situation, people take loan and are forced to pay interests for a long time. Retrofitting is very economic and is therefore a boon especially for poor households,” he stated.

Apart from being cost and time efficient, another advantage of retrofitting is the conservation of traditional designs. When a structure is retrofitted instead of being reconstructed, their original design is saved. “As the structure remains intact, and becomes even stronger, retrofitting is a great option when it comes to preserving the originality of structures,” said Maharjan.

In Sagachowk of Sindhupalchowk, 35 mud houses are being retrofitted in three villages as part of the project’s first phase. “Of them 16 have completely been retrofitted, others are in the final stage of completion,” Maharjan informed.

During retrofitting, as far as possible, doors, windows, ladders, ceiling of the house is not replaced and outer structure is kept intact. But from inside, houses are made stronger as well as earthquake resistant, he further added.

'Pandemic Of Racism' Led To Georg Floyed Death
Jun 05, 2020
WHO Withdraw Restriction On Study On Hydroxychloroquine
Jun 05, 2020
Cyclone Nisarga Continues To Bring Rain In Many Places Of Nepal
Jun 05, 2020
150 Plus Nepali Migrants To Arrive From UAE Tomorrow
Jun 04, 2020
Lunar Eclipse On June 5 And 6: Strawberry Moon, Time Of The Eclipse Duration In Nepal
Jun 04, 2020

Nepal, China, India And Bangladesh Among Asian Nations Accused by UN Of Censorship During Pandemic By NEW SPOTLIGHT ONLINE 1 day, 1 hour ago

King Birendra And His Family: Nineteen Years After Massacre By NEW SPOTLIGHT ONLINE 3 days, 20 hours ago

NEPAL-INDIA Bonds Across Border By Keshab Poudel 5 days, 12 hours ago

India Open To Engaging With Nepal In An Environment Of Trust And Confidence: MEA Spokesperson By NEW SPOTLIGHT ONLINE 6 days, 23 hours ago