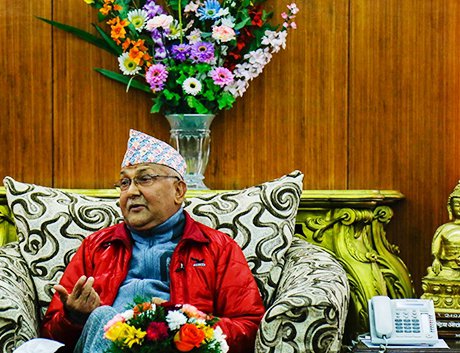 Nepal’s Supreme Court witnessed bizarre scenes last week. A senior judge gave a statement declaring that the Chief Justice Gopal Prasad Parajuli had attained superannuation on the grounds of age, seven months ago. A day after the statement, eight judges refused to hold the bench in solidarity with their fellow judge. This was followed by the secretary of the judicial council issuing a letter removing Parajuli from his post. The action in the court seemed to be stage-managed with the all-powerful Prime Minister K P Oli extending tacit support to Parajuli’s detractors. The event has generated fears that Oli is on the way to becoming authoritarian. On March 13, he called Parajuli to his residence and asked him to quit or face consequences.

Parajuli was not a great judge. He had been in the thick of controversy over his age but no one expected that the country’s executive head will issue marching orders to the chief justice.

Over the past month, Oli has taken far-reaching decisions that have increased his powers. He has brought the state’s powerful investigating agencies directly under him and has assigned important political posts, including that of the president, Upper House chairperson and provincial chief ministers to his loyalists, reducing other leaders in the party to non-entities.

In fact, it is not just Oli who is guilty of undermining the Supreme Court. The Maoists, who had come to the “democratic fold” at the end of a decade-long insurgency in 2006, wanted that after the abolition of the monarchy, the Supreme Court should be brought under the legislature. They had also wanted to totally restructure the country’s army. However, the top leaders of Nepal’s three major parties, the Communist Party of Nepal-Unified Marxist Leninist, the Nepali Congress as well as the Maoists themselves, agreed on an alternative model. They chose to pack the Supreme Court with their loyalists. Other state organs were also undermined in a similar manner. They, however, chose not to touch the army, fearing reprisals.

But with Oli aligning with the Maoists now, and with the Nepali Congress in the Opposition, the army could be the next target. Maoist chief, Pushpa Kamal Dahal, had indicated days before the Parajuli episode that corrupt politicians, officers of security agencies and judges will be booked. What Dahal said earlier and Oli has done now gives a clear message that Nepal’s apex court should not come in the way of the government’s activities. As most judges have a background in either an NGO or with a political party, their lack of judicious conduct will now be used against them by the government at will.

The Supreme Court acted fairly and boldly during the monarchy. It entertained habeas corpus petitions and lifted the ban on politically-inclined youth and student organisations. In 2006, the Supreme Court dismissed the Royal Commission on Corruption that was constituted to investigate corruption charges against the former Prime Minister Sher Bahadur Deuba. The court did not have to face royal vendetta for its actions. But this time, judges have shown that they are willing to be part of the executive design if that suits their personal or partisan interests.

That Nepal’s judiciary was fast moving towards executive or legislative control was not difficult to understand. Soon after the political change of 2006, major political parties — the Nepali Congress, the CPN-UML and the Maoists — compelled sitting judges to take a fresh oath of loyalty to the new regime that had suspended the monarchy. None of the judges resisted. Soon after that, these parties introduced the system of parliamentary hearing for confirming the appointment of the Supreme Court judges after a judicial council comprising the chief justice, the senior-most judge after the chief justice, the law minister, a nominee of the the Nepal Bar association and a minister nominated by the prime minister, recommended their names. The strength of the parties in the committee reflected their numbers in the House. The parties devised a quota system to appoint members to the apex judiciary and other constitutional bodies. Defying political masters after becoming a judge involved a lot of risk. Sushila Karki, Parajuli’s predecessor, was put under suspension because an impeachment motion was moved in the House when she went public after being instructed on how to frame verdicts in certain important cases.

With a brute majority in Parliament and armed with the sweeping powers of the state, Oli has become more powerful than the king. But how and what he will use this power for will decide his political fate. So far, he has given enough hints of his totalitarian ambitions.