Sophia: The Humanoid Robot In Kathmandu

In a first for Nepal, a humanoid robot named Sophia delivered the keynote address of the Conference on Technology for Public Services, organised by the United Nations Development Programme (UNDP) at Hotel Yak and Yeti, Durbarmarg 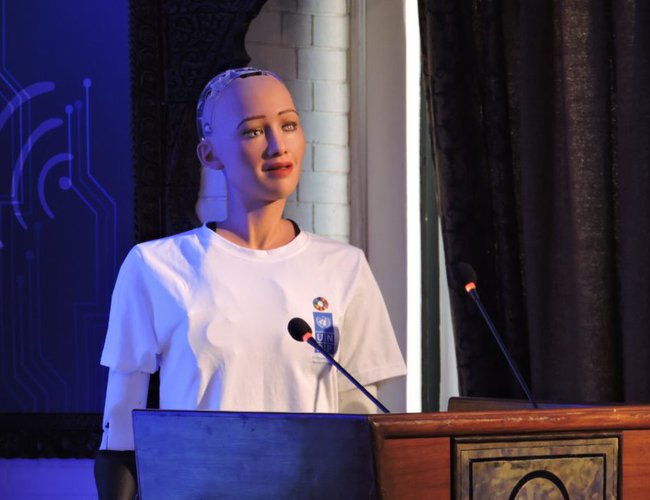 In a first for Nepal, a humanoid robot named Sophia delivered the keynote address of the Conference on Technology for Public Services, organised by the United Nations Development Programme (UNDP) at Hotel Yak and Yeti, Durbarmarg.

The conference was part of an effort to facilitate discussion on how technology and innovation could contribute to better governance and towards achieving the Sustainable Development Goals (STGs) delegated to member states, organisers said.

The event comprised a seminar and an innovation fair.

There was much fanfare ahead of the seminar because a humanoid robot was to deliver the keynote address.

The UNDP’s first non-human innovation champion and celebrity robot, Sophia, briefly spoke about the advantages yielded by new technology in terms of research and governance. She concluded the address by reassuring audiences they had nothing to fear from a general AI (Artificial Intelligence), such as herself.

The seminar heard presentations by Lal Bahadur Khatri on the application of e-governance models in transforming tax collection; Mahabir Pun on the use of drones to provide basic healthcare to those living in remote mountainous regions; Dr Manish Pokharel on the uses of e-education; Ramraj Narsimha on the innovation of earthquake warning systems, e-building permit systems and iData; Nagesh Badu on the application of e-governance tools in local governments; Shyam Kumar Bhattarai on the introduction of an automated case handling system for legal affairs, while Shekhar Golchha presented the benefits of assuming  a One Stop Shop model for government offices.

The Innovation Fair, which opened after the presentations, displayed information kiosks that gave attendees a chance to see technologies mentioned by the presenters.

Sophia’s appearance here, just like her Saudi Citizenship, was entirely a public relations stunt. Saudi Arabia had granted the robot full citizenship as a gimmick to promote a tech summit that was part of a notional policy to transform its oil-based economy into something more tech driven.

Despite the hype, critics argue that allowing an AI to be a legal person sets a dangerous precedent, as Sophia is essentially a citizen that can be turned off and can be freely bought and sold.  Her citizenship is comparable to the notion of corporate personhood, which gives companies some of the legal rights and responsibilities of people. Thus, giving AI anything close to human rights would allow firms to defer both legal and tax liability to robots. Calling her “alive” would be utterly misleading however, Sophia is not unintelligent, either.

Sofia is an impressive technological feat, even a work of art, but not quite “alive”.