China And Nepal Are Good Friends And Good Neighbors

China And Nepal Are Good Friends And Good Neighbors 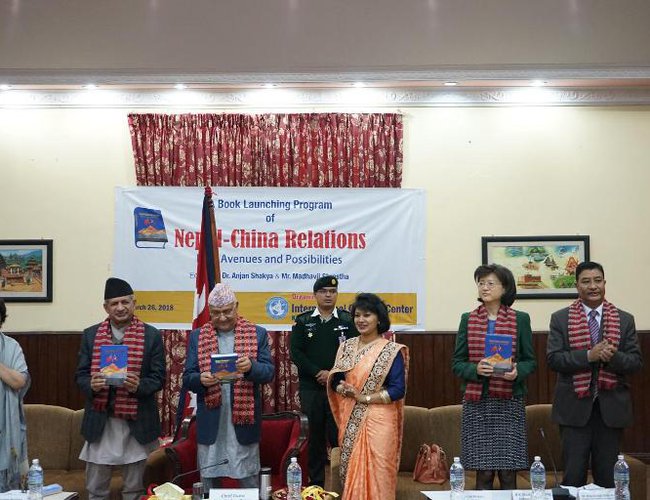 Several days ago, the Chinese People’s Political Consultative Conference (CPPCC) and National People’s Congress (NPC) successfully concluded. National People’s Congress elected the new leadership of the country and adopted the restructure plan of the State Council and amendments to the Constitution of China, which has great significance to China’s development in the years ahead. The economic strength of China has reached a new height, significant headway has been made in reform and opening up and people’s living standards have been constantly improving. China has made historic achievements in all fields and stands at a new starting point of development in history.

This year marks the 40th anniversary of China’s reform and opening up. During the 40-year development, Chinese people’s living quality and standard have been improving substantially. China has made tremendous contribution to the world economic growth and poverty reduction, accounting for more than 30% and 70% respectively. However, China’s basic national condition has remained same. That is, China is still and will long remain in the primary stage of socialism has not changed. China’s international status as the world’s largest developing country has not changed. The new government has specified three major missions. Firstly, to coordinate all work to maintain stable growth, promote reform, make structural adjustment, improve living standards and guard against risk while focusing on three challenges, namely forestalling and defusing of major risks, targeted poverty alleviation and addressing pollution. Secondly, to deepen reform in key areas and improve business environment, thirdly, to focus on people’s livelihood improvement such as employment, education , health and retirement and fulfill the promises of the government. China is entering a new era of development with brand-new look.

China’s development cannot be isolated from the world and vice versa. China is determined to build world peace, contribute to global prosperity and uphold the international order. The aim of China’s major-country diplomacy in the new era is to foster a new type of international relations and build a global community with a shared future, which was written repeatedly in the UN documentations and in the Constitution of the People’s Republic of China. China will continue to actively participate in the reform as well as building of global governance system, contribute more Chinese wisdom, Chinese solutions and Chinese strength to the world and push for building an open, inclusive, clean, and beautiful world with lasting peace, universal security, and common prosperity.

China will deepen relations with its neighbors including Nepal in accordance with the principle of amity, sincerity, mutual benefit, and inclusiveness and the policy of forging friendship and partnership with its neighbors. Guided by the principle of upholding justice while pursuing shared interests and the principle of sincerity, real results, affinity, and good faith, China will work to strengthen solidarity and cooperation with other developing countries. The Belt and Road Initiative (BRI) proposed by President Xi Jinping is a global public good provided by China. Extensive consultation, joint contribution and shared benefits is its golden rule. It abides by international rules and follows market principles. To date, more than 80 countries including Nepal and international organizations have signed BRI agreements with China. China will actively boost the building of the Belt and Road Initiative, strengthen exchanges and cooperation with the world. We believe China’s reform and development will benefit the mankind.

Nepal has successfully completed three-tier elections in which the Nepali people actively supported and participated and the new government has been formed under the leadership of Prime Minister Oli. China congratulates Nepal for taking this important step on the way of implementing your new constitution, and fostering national development and stability.

At present, both China and Nepal stand at a crucial point of development of new era. New opportunities are in sight. Both countries’ common pursuit of development is a cooperation opportunity. The determination for strong bilateral cooperation in various areas is an opportunity. The Belt and Road Initiative joined by two countries is an opportunity. The two sides should implement all the agreements with down-to-earth spirit, promote the connectivity of road and railway, improve port infrastructures, advance trade facilitation, push forward the construction of cross-border economic cooperation zone, enhance the cooperation of post-disaster reconstruction and investment in tourism, promote people-to-people and cultural exchanges and strengthen the visits between governments, parliaments, Parties, local governments, business sector, media, youth and women, etc. I expect the Nepali government to provide necessary support and help for the Chinese enterprises operating in Nepal. China is willing to continue as always providing assistance and support for Nepal’s development within its capacity. In November,2018, the First China International Import Expo will be held in Shanghai. We hope that Nepal seizes this opportunity to show its unique landscape,abundant resources, time-honored cultures and explore new growth point of bilateral trade. We believe that China-Nepal comprehensive cooperative partnership featuring ever-lasting friendship will make new achievements continuously under the joint efforts of the two sides. Let’s join hands to compose a new chapter of China-Nepal relations.

Yu Hong is the ambassador of People’s Republic China to Nepal. This is an excerpt of the remarks on the Book Launch of Nepal-China Relations: New Avenues and Possibilities.

Border Dispute Between Nepal And India By Dr. Prabin Manandhar 5 days, 3 hours ago