The loan can be renewed if the central bank allows the concerned bank to do so, as per the guideline issued by Nepal Rastra Bank. 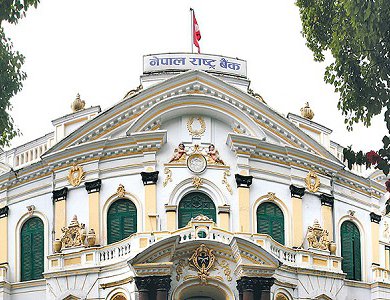 Banks that have been facing crisis of loanable funds have something to cheer about, as Nepal Rastra Bank has allowed them to borrow funds from foreign banks and financial institutions to meet the demand of credit in the country’s economy.

NRB has provided borrowing facility to commercial banks based on the authority extended by the Foreign Exchange (Regulation) Act, 1962.

However, NRB has placed some conditions for foreign borrowing.

According to The Himalayan Times, commercial banks can borrow up to 25 per cent of their core capital in convertible currency from foreign banks to lend to hydel projects, lay transmission lines, construct roads, tunnels, airports, cable car projects, bridges and other physical infrastructure, tourism, agriculture and for the purpose of issuing micro credit.

However, the central bank has barred banks from lending the funds borrowed from foreign banks for housing and real estate development.

Also, only those commercial banks that meet the paid-up capital requirement and capital adequacy ratio can borrow from foreign banks and financial institutions.

The core capital of the 28 commercial banks in operation stands at around Rs 320 billion. Taking this figure into account, banks can obtain loans of around Rs 80 billion in convertible currency, according to NRB officials. This facility will ease the current challenges of credit crunch.

Banks will have to take the decision through their board of directors’ meeting to obtain the foreign loan. If any bank is prevented by the central bank from conducting cross-border transactions, then it will not be allowed to obtain the foreign loan. The loan facility must be availed for a period of at least one year and repayment may be done between one year and five years. The loan can be renewed if the central bank allows the concerned bank to do so, as per the guideline issued by Nepal Rastra Bank.

The interest rate and additional fees charged by the lender can be up to a maximum of three per cent plus the six-month average of London Inter-bank Offered Rate (Libor), according to NRB. Nepali banks cannot offer additional fees, charges and commissions to get the loan approved by the lender.

Banks will be allowed to float the loan in convertible currency within the country in the aforesaid sectors as categorized by the central bank. Meanwhile, the foreign fund borrowed by the banks cannot be used for interbank transactions.

The central bank has also stated that banks must take its approval before obtaining such loan and also submit the record of interest repayment to the NRB. It has also mentioned that banks will have to deduct taxes that are applied on the interest amount before repayment.

Commercial banks must also abide by all national and international laws on Anti-Money Laundering/Combating the Financing of Terrorism, as per NRB.

Japan To Celebrate May 26 As “Hirotaka Takeuchi 14 of 8000m Mountains Summit Day By NEW SPOTLIGHT ONLINE 12 hours, 38 minutes ago