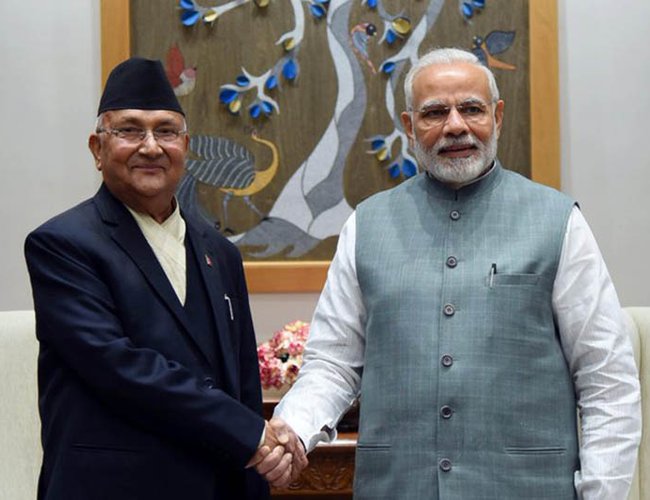 All apparent indications suggest that Nepali Prime Minister KP Sharma Oli’s three-day visit to India has been a success. Oli was received at the airport by India’s Home Minister, he was lodged in Rastrapati Bhawan with a special guard of honour, and he had a long and frank one-on-one discussion with Prime Minister Narendra Modi.

A twelve-point joint statement was issued highlighting the resolve of the two prime ministers to take their bilateral relations “to newer heights on the basis of equality, mutual trust, respect and benefit.” Three agreements, on a rail project connecting an Indian border town with Kathmandu, on inland waterways connectivity and on agricultural development in Nepal, were signed.

The main purpose of the visit was to rebuild trust between the two countries, seriously vitiated for more than two years, since September 2015.

India had then felt cheated on the promised inclusiveness (accommodation of Madhes) and secular character (India informally wished the word ‘secular’ to be dropped) of the new Nepali Constitution.

The United Marxist Leninist (UML) Party under Oli’s leadership was seen as the main source of resistance to the Indian agenda. The Indian leadership used all the tricks of the trade, ranging from regime change to economic coercion, to send a strong message of disapproval.

Oli reacted strongly and decisively. He whipped up Nepali nationalism with anti-India overtones, defeated political formations that were willing to play for India to marginalise him and flashed the China card to diversify Nepal’s dependence on India.

His success was ensured by a huge simmering backlog of resentment in Nepal vis-à-vis India, resulting from India’s intrusive and insensitive approach, delivery deficit on promises made, and tendency to take things for granted.

China – The Invisible Elephant in the Room

These were patently emotive approaches on the part of both leaderships, resulting from their mutual ego clashes, knee-jerk reactions and gross misunderstandings.

There was also the invisible elephant in the room – China – that was all too willing to and capable of exploiting Indian weaknesses and vulnerabilities in the whole of South Asia, including Nepal, to facilitate its assertive intrusion into India’s neighbourhood, both economically and strategically.

Its Belt and Road Initiative had come into play as a major and attractive instrument in this respect.

The relationship between the two countries being deeply and intricately intertwined by geography, civilisational bonds, and cultural and social enmeshing, the strain in relations could not have been sustained for long.

Soon after Oli’s impressive victory in Nepal’s first constitutional elections at the local, provincial and federal levels in December 2017, India moved to control the damage. Modi called Oli to congratulate him on his electoral victory and sent foreign minister Sushma Swaraj in February 2018 to assuage Oli’s hurt feelings, asking him to “forget past bitterness”.

Oli also responded positively and agreed to honour the tradition of making India the first destination of his foreign state visits.

Oli also realised that his posturing on seeking an alternative to India in China was more of a political statement than an economic reality. He knows that without Indian help and support, his electoral promises to deliver development cannot be kept.

An unhappy India can also be a source of trouble as his alliance with the Maoists, even after unification of the two Communist parties, will remain inherently fragile and vulnerable.

Oli did not hesitate to articulate all his grievances in New Delhi. He asserted Nepal’s sovereignty and independence, demanded non-interference and respect for Nepal’s sensitivities, asked for expediting implementation of pending and promised projects in a time-bound manner, expected concrete steps to reduce Nepal’s heavy bilateral trade deficit, and sought all possible help in ensuring Nepal’s political stability and economic development.

He made it abundantly clear to all his interlocutors that while keeping in mind India’s core security interests, he will freely engage with all other neighbours in promoting Nepal’s interests.

His foreign minister had warned that a basic restructuring of relations with India is being attempted by Nepal.

The Indian side has gone along with Oli’s sentiments in all public pronouncements, but has quietly conveyed the message subtly, yet firmly, that undue warming up with China and Pakistan will not go down well with New Delhi.

India preferred the strengthening of BIMSTEC (Bay of Bengal Initiative for Multi-Sectoral Technical and Economic Cooperation) as against SAARC (South Asian Association for Regional Cooperation), and suggested that Oli give up Pakistan’s advocacy for activating SAARC.

In relation to China, if Nepal ignores India’s concerns, there were options open to New Delhi, like not purchasing power from the Chinese-added hydro-projects. The Madhes issue, though put on the back-burner, has not been abandoned.

China Not About to Let Oli Off the Hook So Easily

The test of Oli’s visit and India-Nepal parleys in New Delhi will depend upon the extent the two sides meet their commitments as well as each others’ expectations.

It will surely not be easy for Oli to dilute his two political assets; of politically cashing in on Nepali nationalism and deploying the China card to extract concessions from India. The first is a manifestation of his political and electoral strength and the second is tied to the support and interests of China.

Having prepared to invest so heavily in Nepal – in the political and strategic domains – China will not easily let Oli loosen his dragon hug.

There is also no doubt that India will not happily endorse Oli’s constraints on both these counts at the cost of its own vital security and economic stakes in Nepal.

By undertaking projects like the rail link to Kathmandu, India has also consciously stepped into an unwinnable competition with China.

While China promises to bring the rail link from Tibet to Kathmandu by 2022, India would be able to only complete the survey of the project by 2019. Oli wanted India to put in writing a five-year deadline for the rail project, which India obviously could not do.

Keeping in view these challenges, only the coming months will show if Oli’s visit has firmly put India-Nepal relations back on track.

(SD Muni is professor emeritus, JNU, and former special envoy and ambassador in the Government of India. This is an opinion piece and the views expressed above are the author’s own. New Spotlight neither endorses nor is responsible for the same.)

S.D. Muni is Professor Emeritus at JNU and former special envoy and ambassador, the government of India.

ASEAN Calls On Myanmar To Accept Special Envoy By Agencies 7 hours, 12 minutes ago

Sudanese Military Seizes Power And Control The Country Following A Coup By Agencies 2 days, 5 hours ago

China FM To Meet Taliban Delegation In Qatar By Agencies 2 days, 6 hours ago