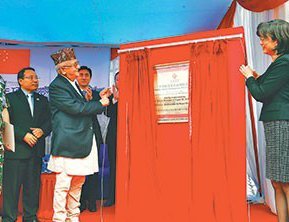 The Chinese government has handed over the one-megawatt photovoltaic solar system located at Singha Durbar to the Nepal government.

During the launch ceremony, PM Oli stated that such projects are directly related to the nation’s economic prosperity and can easily be adopted in other areas as well. “Clean energy is the most suitable and justifiable source of energy for economic prosperity for a country like Nepal with challenging and diverse geography.”

Meanwhile, Chinese Ambassador Yu said that the Chinese government is always willing to support Nepal through these types of projects to ensure its prosperity. She added, “Nepal could definitely reap the benefits from China’s massive economic transformation.”

The Chinese government had installed the solar system as grant to Nepal, at a total cost of about Rs 600 million (37 million yuan). The solar panels have been installed on the roof of 21 buildings, including all the ministries located within Singha Durbar. The process of installing the solar panels began two years ago.

Spokesperson and Joint Secretary at the Energy Ministry, Dinesh Kumar Ghimire, said that installation of solar panels would make a huge contribution to the country’s goal of gradually shifting towards renewable energy, though the generated power from the solar panels would be insufficient to meet all the energy needs within Singha Durbar.

He expressed hope that installation of solar panels would significantly reduce the electricity bills of the ministries and other office buildings.

UPPER TRISULI 3 B Work In Progress By NEW SPOTLIGHT ONLINE 2 weeks, 1 day ago

The Government Will Bring A Relief Package: Minister Pun By NEW SPOTLIGHT ONLINE 2 weeks, 2 days ago