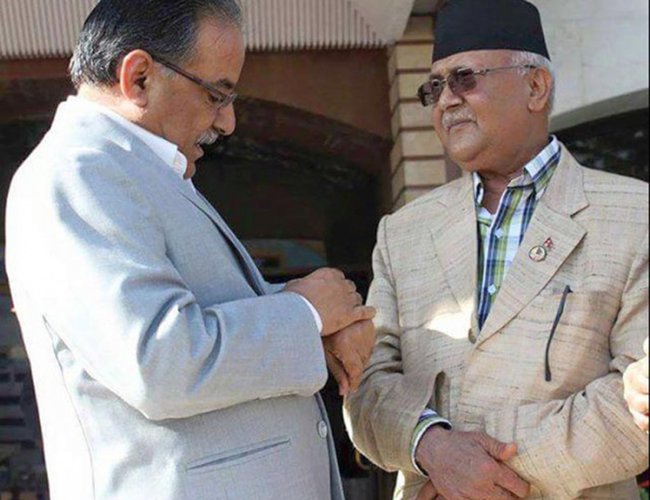 Much-anticipated high-level talks between the CPN-UML and CPN (Maoist Center) planned for Tuesday was postponed to Wednesday and then postponed again signaling possible delays in likelihood of a final deal on left unification on the proposed date.

The UML and CPN (Maoist Center), partners in the ruling alliance which in February inked a seven-point framework merger deal, plan to make a formal announcement of unification on April 22, which is Lenin's birth anniversary.

The meeting scheduled for Wednesday was postponed citing busy schedule of Prime Minister KP Oli who was busy inspecting the Upper Tamakoshi Hyrdopower Project, according to CPN (Maoist Center) spokesperson Pampha Bhusal. The meeting was put off on Tuesday in view of UML senior leader Madhav Kumar Nepal's China visit.

But sources said lack of homework in resolving the disputed issues was the main reason behind the delays in talks. The two parties are still at loggerheads over power sharing, election symbol and formal recognition of the 'people's war' in the unified party.

Maoist Center has demanded 50 percent share in the unified party organization and insisted official recognition of the 'people's war' in the statute of the new party. Some Maoist leaders have also expressed their reservations on the proposal to adopt UML's election symbol. UML leaders have rejected all demands. Though the largest party has yet to make its view public, UML leaders said the party was not in position to give more than 40 percent stake to the Maoist Center.

"All the pending issues need further deliberations between the two chairmen. The formal talks will take place once there is some sort of understanding on the disputed issues," said a UML leader. He said that Maoist Center Chairman Pushpa Kamal Dahal's unwillingness was a key reason for the state of uncertainty.

Despite the existing challenges, leaders said that there was still a chance of unification on the set date. They said that it will require compromise by both sides.

According to My Republica, two taskforces headed by Nepal and Home Minister Ram Bahadur Thapa have already prepared party statute and political document for the unification. Leaders said that the document will be completed once the two sides finalize division of organization.

"Various taskforces have already submitted draft on the unification. Now it's up to the two chairmen how to settle the remaining issues," said Bhusal.

Some Maoist leaders close to Dahal on Tuesday told Republica that the unification could be delayed by a few weeks, or even a few months, due to widening distrust between the two sides. They had blamed Oli's hardened stance on the issue of power-sharing and high-handedness on issue of governance for lack of a breakthrough.