Finance Minister Yubaraj Khatiwada today inaugurated the NEC 2018 amidst a formal ceremony by unveiling the Economic Census monument on the premises of CBS. 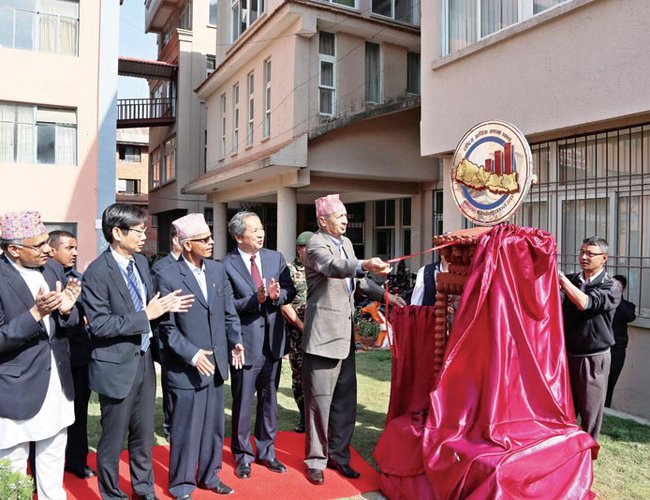 The country’s first ‘National Economic Census’ (NEC) 2018 kicked off today to collect the database of every entrepreneurial activity in production and distribution of goods and services in both agricultural and non-agricultural sectors.

The Central Bureau of Statistics (CBS) has mobilised 3,500 surveyors to collect the data till June 14.

Finance Minister Yubaraj Khatiwada today inaugurated the NEC 2018 amidst a formal ceremony by unveiling the Economic Census monument on the premises of CBS.

Addressing the programme, the finance minister underscored the need to produce quality data which will be crucial in the future for evidence-based planning and policy formulation and addressing several indicators of Sustainable Development Goals (SDGs). He also urged the business community, formal and informal sectors to support the data collection process for NEC 2018.

The NEC will generate big data, which can be utilised for evidence-based policymaking in the lower layers of administration as well. It has aimed to provide basic economic data for formulation of plans and policies at the federal, provincial and local levels; consolidating the nation’s accounts system; augmenting the policy and plan formulation by industrialists, businessmen and investors for business promotion and prosperity; and for the research and study by academic researchers.

It will also help the private sector to identify the prospective investment areas and the geographical location as well. More importantly, the exact employment figures in formal and informal sectors will be known once the CBS discloses the results, which might take at least a year after completion of field-level works in mid-June, according to the CBS.

Japan International Cooperation Agency (JICA) has supported the government to carry out Nepal’s first economic census. JICA and CBS had signed a pact in February of 2016 to implement ‘Project on Capacity Development for the implementation of Economic Census 2018 in Nepal’. The objectives of the project are to develop capacity of CBS officials to conduct census and to enhance skills in conducting other related statistical surveys.

In the inaugural ceremony of NEC, Ambassador of Japan to Nepal Masashi Ogawa stated that the government of Japan is happy to be a part of the first ever economic census of Nepal and is hopeful that this initiative will pave the way for the government of Nepal to function in a positive manner to translate its vision of economic prosperity.

The bureau had set up District Economic Census Office in all the 77 districts of the country on March 15 for this purpose. CBS Director General Suman Raj Aryal said that the enumerators and supervisors have been deputed to their respective working areas for the census. Aryal urged all sides concerned to extend cooperation to the enumerators who will be going to every house, business establishment, and place of business and trade for data collection.

Stating that consolidation of the country’s economic statistical system was the need of the hour, Aryal said that the objective of the economic census is to collect data of the economic and business units like industries, business establishments and service providers.

FAO’s Asia And the Pacific Nations To Hold Regional Conference In Virtual Mode In September By NEW SPOTLIGHT ONLINE 14 hours, 33 minutes ago