Leaders from the two parties will hold a decisive negotiation on the remaining issues of merger during a high-level meeting of the two parties planned for Tuesday, Dahal said addressing a program in the capital on Monday 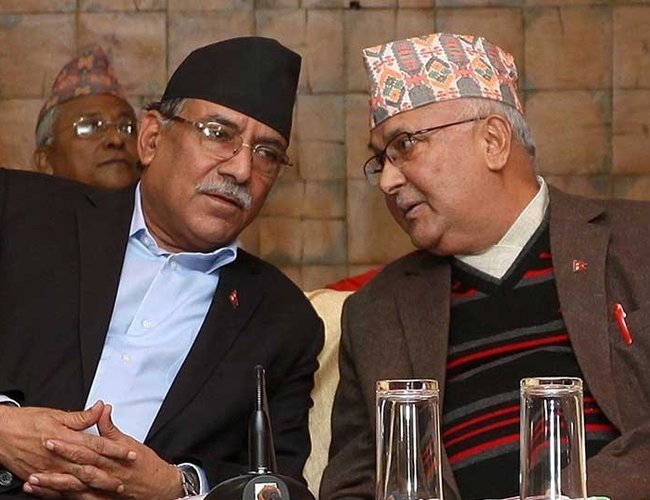 The CPN-UML and CPN (Maoist Center) have agreed to make a last-ditch effort to unify the two left parties on April 22 as previously agreed. The UML and Maoist Center, which have already inked a seven-point framework merger deal, have not been able to finalize the political and ideological draft due to differences over some key issues. This has raised doubts on the possibility of unification on April 22, the birth anniversary of Lenin.

During the meeting held at the Prime Minister's Residence at Baluwatar, Oli and Dahal agreed to put all efforts to sort out the differences through high-level discussions within the next few days.

Leaders from the two parties will hold a decisive negotiation on the remaining issues of merger during a high-level meeting of the two parties planned for Tuesday, Dahal said addressing a program in the capital on Monday.

Despite resolving above 80 percent of disputes relating to merger, the two parties have not been able to give a written shape to the merger due to differences on some key organizational and ideological issues.

Notably, there is a huge difference on the share of power between the two parties. Maoist Center, the junior party, has demanded 50 percent share in the unified party. The party has said that both parties should have equal representation in the central committee and other executive bodies.

During the informal discussions, UML has proposed giving 30 percent share to the Maoist Center in the unified party but said that it could be revised.

During Monday's meeting, Oli said that he was ready to settle the disputed issues based on compromise and consensus, according to a leader briefed on the issue. He said that the UML would put forth a concrete proposal on division of power after internal consultations with party rank and file.

Oli, who on Monday held a meeting with party standing committee, is expected to take the suggestions of party central committee during a meeting planned for April 19.

Maoist leaders said that they are expecting a concrete proposal on power-sharing during a joint meeting of the party unification committee slated for Tuesday morning.

"Our party will take an appropriate decision once the UML comes forward with a concrete proposal. There is still a chance of agreement if the UML makes sincere efforts to accommodate us. But nothing will happen if there is no change in its approach," said Maoist leader Mani Thapa.