Amjad Hussain B. Sial, Secretary General of the South Asian Association for Regional Cooperation (SAARC), addressed the Inaugural Session of the SAARC Cultural Capital-2018 in Thimphu, Bhutan, this morning. 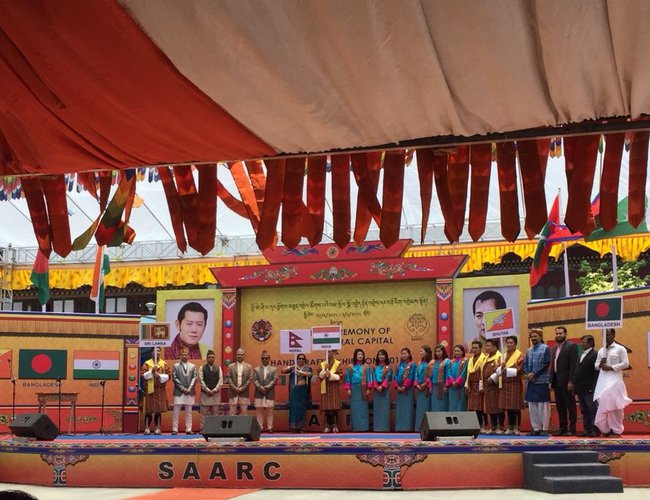 Amjad Hussain B. Sial, Secretary General of the South Asian Association for Regional Cooperation (SAARC), addressed the Inaugural Session of the SAARC Cultural Capital-2018 in Thimphu, Bhutan, this morning.

Tashi Dorji, Chairperson of the National Council of Bhutan graced the occasion with his august presence as the Chief Guest. He also addressed the Opening Ceremony.

In his Address at the Inaugural Session, the Secretary General congratulated the Royal Government and the people of Bhutan on Thimpu being declared the Second SAARC Cultural Capital for 2018. He stated that this recognition is not only a testimony to the unique beauty and serenity of Thimphu but is also an acknowledgement of the sustained efforts of the Royal Government and the people for protecting and preserving its pristine environment and making Bhutan the only carbon negative country in the world. He further said, “This historic feat of the Royal Government reminds me of the concept of Gross National Happiness introduced by His Majesty the Fourth King of Bhutan, which continues to guide its successive Governments in attaining happiness and wellbeing of the people, beyond the count of money and material achievement, popularly known as Gross Domestic Product.”

According to press release issued by SAARC Secretariat, touching upon the importance of culture, the Secretary General said, “Culture in any society is the binding force that brings people together. In essence, culture is the fabric of day-to-day life, which shapes the identity of peoples and societies. Protection and promotion of cultural values is, therefore, fundamental to the sustainability of human civilization.”

In his address, the Secretary General also thanked the SAARC Cultural Centre based in Colombo for organizing the SAARC Handicraft Workshop and Exhibition coinciding with the opening ceremony of the SAARC Cultural Capital-2018.  The two-day Exhibition, which brings together artisans from the Member States of SAARC, is aimed at showcasing under one roof diverse cultural themes and values of the region.

In pursuance of the SAARC Agenda for Culture adopted by the Fourteenth SAARC Summit in New Delhi, India, in April 2007, Bamiyan Province of Afghanistan was declared the First SAARC Cultural Capital for 2015. Afghanistan organized several cultural activities in Bamiyan Province following this declaration. Bhutan will follow suit during 2018.

Situation In China-India Border Area Is Stable And Under Control: Chinese Foreign Ministry By NEW SPOTLIGHT ONLINE 1 day, 6 hours ago

Japan To Lift State Of Emergency For All Areas By NEW SPOTLIGHT ONLINE 4 days, 5 hours ago