Prime Minister K P Sharma Oli will have a busy agenda featuring energy, railway, and trade during his five-day State Visit to China, beginning from June 19. 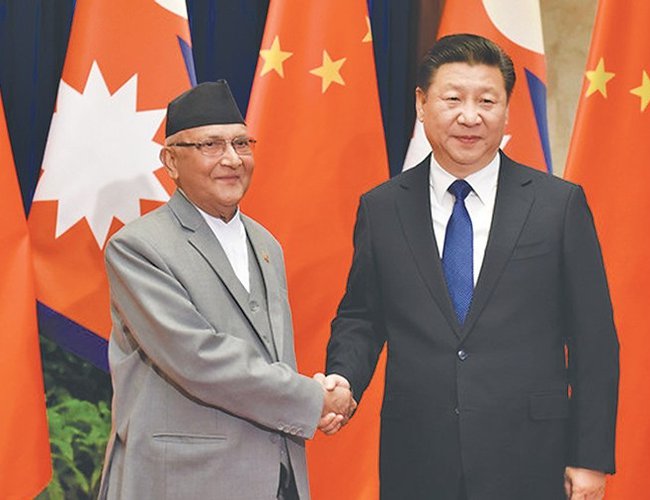 Prime Minister K P Sharma Oli will have a busy agenda featuring energy, railway, and trade during his five-day State Visit to China, beginning from June 19.

Wu Jianghao, Director General is currently in the Capital to discuss preparations for the visit. He also met with Nepal Communist Party Chairman Pushpa Kamal Dahal and invited him to China.

According to The Kathmandu Post, various ministries are working on Oli’s agenda. The Ministry of Foreign Affairs, led by a committee headed by Foreign Minister Pradeep Gyawali, would ratify the agenda.The PM’s Chief Adviser Bishu Rimal said, “We would inform after the PMO receives the agenda. The focus would be on implementing past accord with China signed by PM Oli during his visit in 2016.”

During the meeting with DG Wu, Foreign Secretary Shankar Das Bairagi and MoFA China Desk Head Ganesh Dhakal discussed Nepal’s agenda. Wu assured he would forward them to the concerned departments in China and will revert soon.

Officials said both sides have almost agreed to the MoU on launching the joint feasibility study on Nepal-China Free Trade Agreement. They expect it to be signed during the visit.The pact on Joint Co-ordination and Implementation Mechanism, too, is at the final stage. This accord monitors progress of projects funded by China in Nepal.

The MoU on Investment and Production Capacity is at the final stage. China will assist Nepal in building its capacities in industry and commerce.Another agreement likely to be signed is building oil storage facilities in Nepal China’s help. Senior officials at the Ministry of Industry, Commerce and Supplies and Nepal Oil Corporation have conducted field visits recently and identified three locations—Battar (Nuwakot), Champi (Lalitpur) and Khairantar (Tanhau).

Another key feature of the visit is how Nepal will respond China’s Belt and Road Initiative (BRI) and initiate projects under its framework. Officials said the Ministry of Finance has identified 20 projects seeking Chinese funds under BRI. However, the government has not yet selected projects under BRI.

Out of the 20 projects, the Energy Ministry hopes to sign an agreement on Nepal-China Transmission Grid Connectivity (400 KV Rasuwagdhi-Keyrung-Galchi Cross Border Transmission line). Recently, this line has been extended to Galchi in Dhading district. Its distance will be 880 kilometers, 800km China and 80km in Nepal.

Another proposal is on energy trading between Nepal and China. Energy Ministry officials expect a deal during PM Oli’s visit. Another proposal concerns finding the exact capacity of Nepal’s hydropower generation, said officials. This is also work in progress. If the parties sign a MoU, Chinese technicians would conduct a study on Nepal’s actual harnessing capacity of hydropower. China has already expressed its interest and applied for a license at Energy Ministry.

Another MoU will be on Nepal-China Rail Corridor. A MoU on conducting feasibility study and preparing DPR of Keyrung-Kathmandu will be signed during the visit. The parties are likely to discuss another rail link the Keyrung- Rasuwagadhi-Galchi-Kurintar-Pokhara-Lumbini line. Opening three new north-south road corridors figure on the agenda. They are Hilsa in far west, Korola in mid and Kimathanka in east.

FAO’s Asia And the Pacific Nations To Hold Regional Conference In Virtual Mode In September By NEW SPOTLIGHT ONLINE 14 hours, 45 minutes ago