Having been out of power for seven years, Sanghiya Samajbadi Forum-Nepal—the fourth largest party in the federal parliament—joined the government on Friday by taking two ministries. 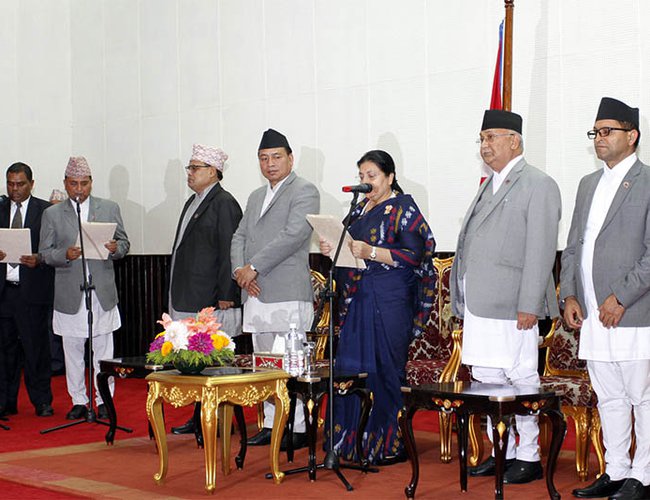 Having been out of power for seven years, Sanghiya Samajbadi Forum-Nepal—the fourth largest party in the federal parliament—joined the government on Friday by taking two ministries.

Inclusion of the Upendra Yadav-led SSF-N in the already strong Cabinet headed by KP Sharma Oli has bolstered the government, which now commands more than a two-thirds majority with 190 lawmakers in the 275-member House of Representatives. After the fourth expansion, the total number of Cabinet members has reached 24.

According to The Kathmandu Post, Prime Minister Oli promoted Defence Minister Ishwor Pokhrel to deputy prime minister while inducting SSF-N Chair Yadav as a DPM on Friday. A former deputy PM and the powerful general secretary of the now dissolved CPN-UML, Pokhrel was unhappy when he did not get the DPM portfolio during government formation.

President Bidya Devi Bhandari administered the oath of office to two-time foreign minister Yadav as DPM and minister for health and population and former labour minister Mohamed Ishtiyak Rai of Banke as minister for urban development at Sheetal Niwas.

The President also administered the oath to Defence Minister Pokhrel as DPM and state minister Gokul Baskota as a Cabinet minister for communication and information technology. Baskota is the government’s spokesperson.

PM’s Chief Advisor Bishnu Rimal said NCP secretariat member Pokhrel ranks after PM Oli while Yadav holds the third Cabinet position.Earlier PM Oli was reluctant to induct Home Minister Ram Bahadur Thapa, who represented the then CPN (Maoist Centre), as a DPM saying that no minister would get that status.Rimal added that State Minister for Health and Population Padma Aryal would remain in the ministry led by Yadav from another party until she is appointed to a ministry led by an NCP member.

SSF-N leaders said they had decided to join the government in order to have an active role in the country’s prosperity and development while continuing to fight for people’s rights. Yadav said his party’s coalition with the Rastriya Janata Party-Nepal in Province 2 would not be affected as long as the RJP-N remained committed to it.

DPM Yadav takes charge as the minister for health and population.