Along with rapid urbanisation, growing markets and waste management practices, countries have faced challenges from plastics both in land and water. Of the 8.3 billion metric tonnes of plastic produced globally over the past decade, only 9% is estimated recycled and 79% accumulates in landfills. Use of plastic bags was estimated at one million per minute in 2011. 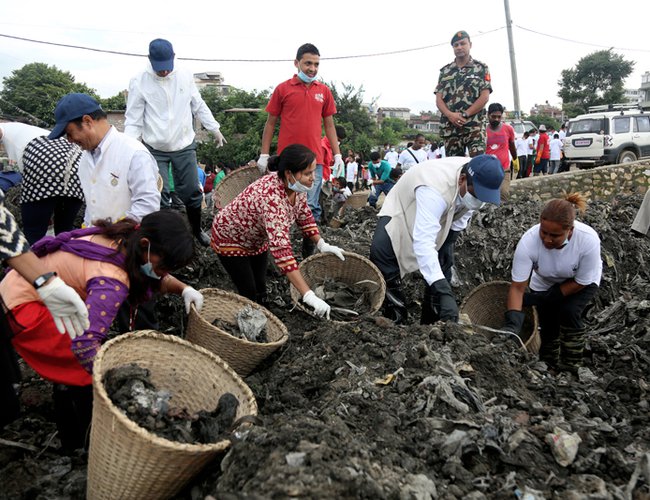 On 5 June (World Environment Day, WED), the Prime Minister of Nepal initiated a year long 'Nepal Clean Environment mega-Campaign' by planting his most favourite species – avocado (Persea americana) and litchi (Litchi chinensis) – in Singhadurbar, the Secretariat of the Government. He called for planting fruit trees with the slogan of 'one Nepali, one fruit tree' and 'one official, one fruit tree' and make the country a garden. The Head of the State observed the WED by planting a widely protected fossil plant named ginkgo (Ginkgo biloba). During the campaign period, about 500 thousand fruit trees may be planted in the country. On 5 June, the government recognised three industries (Surya Nepal, Dabar Nepal, and Unilever Company) for their compliance with the environmental standards. ICIMOD and several NGOs also observed WED by planting species, organising, talk and cleaning programme, and appreciating the good works, including of journalists.

The WED has been celebrated on 5 June (the day the Stockholm Conference on Human Environment was started in 1972) after the decision of the UN General Assembly (UNGA) on 15 December 1972. On the same day, UNGA also adopted a resolution to create UN Environment Programme, a specialised agency on environment. Every year, WED theme differs and this year, countries observed the WED on 'Beat Plastic Pollution'.

Along with rapid urbanisation, growing markets and waste management practices, countries have faced challenges from plastics both in land and water. Of the 8.3 billion metric tonnes of plastic produced globally over the past decade, only 9% is estimated recycled and 79% accumulates in landfills. Use of plastic bags was estimated at one million per minute in 2011. Many countries have faced challenges in managing plastic wastes and have started banning or regulating its use. Bangladesh and Kenya banned the use of thin plastic bags in 2002 & 2017 respectively. About 2 dozen countries have reduced use of plastic bags through bans or fees.

Nepal also banned the use of plastic bags of below 40 micron weight since 1 Baisakh 2072 (mid-April 2015) as per the directives of the Parliamentary Committee on the Environment. Its implementation is unsuccessful in the capital where most politicians, planners, bureaucrats, implementers, educated and rich people live. Hence the challenge is not the 'ignorance' but 'arrogance' or unwillingness to implement commitment.

To make the Campaign 'happen', the Ministry of Forests and Environment (MoFE), renamed again after 27 years to fight against environmental challenges, has adopted 3-pillar environment promotion policies, namely: (i) avoid creating pollution and discharging waste against the prescribed standards; (ii) comply with laws to control water, land, and air pollution; and (iii) use science and technology and successful practices for pollution control, greenery promotion and environment conservation. One of the guiding principles is 'polluters pay'. It is easy to say it but needs a lot of work, using science and technology, to make it operational.

The mega-Campaign Action Plan (CAP) concentrates on: (i) awareness and 'messages'; (ii) sanitation and waste management; (iii) pollution control, including use of only electric vehicles in touristic and cultural sites, enforcement of Euro IV standard, tax exemption for plastic recycling industries, discharge of treated industrial waste, monitoring and auditing of environment management plan etc; and (iv) Greenery promotion where each local level will prepare and implement master plan and model garden. By 5 June 2019, government has expected plants in at least 5% of fallow land and a minimum of one model garden in each local level, reduction of 20% of waste in Kathmandu Valley and all cities, further reduction at least 30% of dust and smoke emission, water pollution and noise level, and also reduction of 50% use of plastic bags in the country. The CAP includes a Programme Coordination and Facilitation Committee, including sub-committees. The Action Plan does not speak about means of implementation, particularly the financial resources.

This initiation sounds good but lacks funding with 'broad-based and diffused' implementation responsibilities. This requires technical expertise and huge financial resources for pollution control. This campaign is expected to advance awareness raising and launch plantation activities as in previous WEDs but will likely not contribute to pollution control which also requires science and technology to translate political commitments into action, and may not ensure survival of the planted 5 lakhs saplings.

The Minister for Forests and Environment has also released Forests and Environment Improvement Action Plan in May 2018. This Plan includes 99 activities in 16 areas and provides least priority to environment and climate change, excluding forest environment. It outlines to revise Climate Change Policy and amend Environment Protection Act (without implementation of policies and environmental laws), launching of environmental campaign, formulate and implement local adaptation plan for action (LAPA) and national action plan on climate change, develop measurement and verification system for carbon emission, REDD+ and CDM, and use of electric vehicle in Kathmandu Valley. It forgot other priority initiatives. It would be too early to evaluate the call. Existing focus calls for 'rethinking' and looking at the environment 'beyond the forests'.