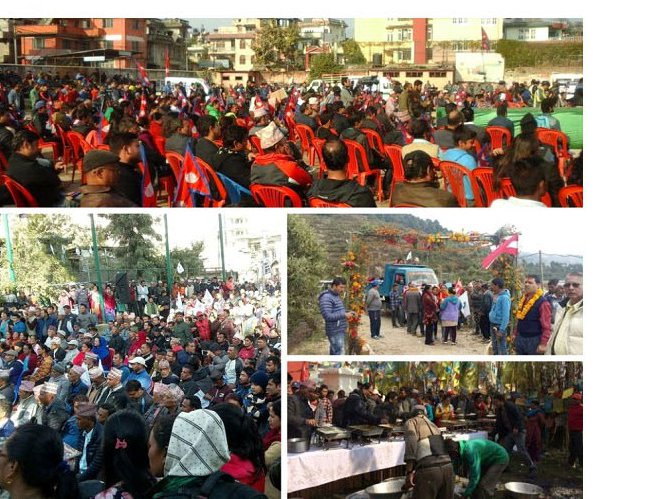 Holding the elections alone is not enough to claim a system to be a representative democracy. One of the fundamental components of elections is whether it is free or not?

Just electing the candidate on the basis of a ballot cannot guarantee free and fair elections. The elections process is very lengthy and complex. From nomination of candidates by political party to filing nominations, personal campaigns, voter mobilizations, voting, there are many complex processes.

With the support from International Foundation for Electoral Systems (IFES), for the first time SAMUHIK ABHIYAN piloted the elections with engagement of civil society in monitoring with the overall aim of creating a more transparent and accountable election system in Nepal.

Following the promulgation of Constitution, the first phase of Nepal’s transition process came to an end. Holding three elections, local, provincial and central, in a matter of a year, Nepal completed democratizing of its political system making it transparent and accountable to the people.

Every country needs periodical elections to strengthen the democratic system. However, elections should be held in a free and fair manner, allowing voters to exercise their rights to choose the representatives.

Nepal’s own experience is that political leaders and candidates vehemently raise the issue of elections rigging and fairness of elections for a few weeks of results, and it will gradually lose the ground later.

Based on the coverage of elections of December 7 in 10 Constituencies of House of Representative (HoR) elections in Kathmandu district, the monitoring focused on the visible campaign expenditures made by the First-Past-the-Post (FPTP) candidates of five major political parties contesting the election in each constituency of Kathmandu district.

The study covered the candidates from NC from the “Democratic Alliance” with Rashtriya Prajatantra Party (RPP) while the CPN-UML and CPN-MC formed the “Left and added candidates from a fifth party, the Bibeksheel Sajha Party (BSP). In each constituency, one candidate was from BSP and one from each of the two alliances." 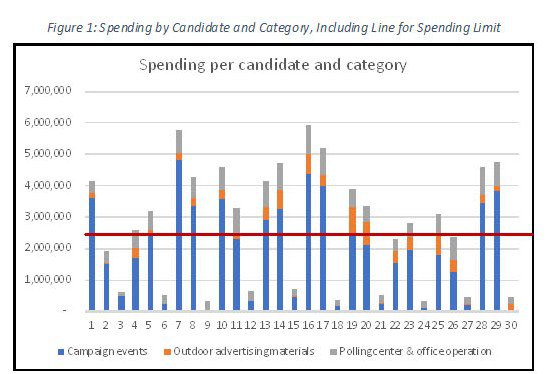 A total of 30 candidates from five major parties were selected and monitored by 15 monitors, supported by core team members. Abhiyan’s 15 monitors monitored candidates in each of the ten election constituencies.

“The project focused on monitoring only the expenses of the candidates, as opposed to the expenses made by any party. Kathmandu was selected because it is the national capital, highly populated, and there was potential for a high level of competition between candidates from major parties,” said the study.

As per the final voter list for these elections, there were 603,460 voters registered to vote in Kathmandu district. The number of voters across the ten constituencies ranged from 42,000 to 75,000.

Although different legal provisions are established through different Acts, Regulations, Directives and Codes of Conduct, nothing can prevent candidates to violate the spending limit set by ECN.

“Money plays a major role in elections in Nepal. Contesting candidates and political parties spend considerable amounts of money and other resources to win the confidence of voters and seek their support. In the recent past, it was reported that candidates invested vast sums of money on election campaigns – often many times the legal spending limit set by the Election Commission of Nepal (ECN),” the study said, revealing the grim reality.

Another important revelation of the report is that most candidates (90%) who submitted financial reports to the ECN, significantly under-reported their campaign expenses compared to the estimates of the monitors. For seven candidates the difference was more than NPR 2.5 million, while for another seven candidates this difference varied from one million to two million.

“Low or poorly regulated spending ceilings can also contribute to a lack of transparency if they create conditions where contestants feel compelled to lie to avoid sanctions,” says report.

To make elections free and fair, there is the need to control the spending of the candidates. The study recommends the need to strengthen Elections Commission Nepal to its financial monitoring and reporting requirements for candidates. According to the study, expenditures above a minimum threshold should be done through bank accounts, and expense reports exceeding a percentage by the candidates of the spending limit should be audited by a certified auditor and accountant.

Since there are so many flaws in laws, reporting requirements for candidates, as outlined in the legal framework, should be expanded to include income sources as well as expenditures. Large donations should be made through the candidate’s bank account and the identity of all major donors should be disclosed.

The ECN should display greater willingness to impose sanctions, up to and including the disqualification of candidates who can be demonstrated to have broken the law.

Legal regulations related to campaign finance should be reviewed through a gender-sensitive lens taking into consideration that far fewer women than men were nominated for first-past-the-post seats. Legal reforms such as income disclosure requirements can help to level the playing field between candidates, particularly for women.

The ECN should introduce a strong and effective mechanism for monitoring campaigns as per the existing Code of Conduct and laws. To this end, the ECN should mobilize independent third-party monitors and establish a separate monitoring unit to govern such monitoring.

A system of partial state funding for political parties and their candidates based on the number of votes received in previous federal election could be established to help regulate election campaign financing, discourage the use of illicit funding and level the playing field.

Very few women were nominated as candidates in direct elections, partly due to the belief of parties that women are unable to raise money as easily as men. This issue could be addressed by introducing gender sensitive regulations that reduce the importance of illicit funds.

However, in no country in the world can effective oversight of political finance be achieved exclusively by a public institution –Civil society in Nepal played a mediating role throughout the conflict as well as contributing to the drafting of the federal constitution of Nepal. Civil society organizations (CSOs) also played a key role in observing the political and electoral processes in Nepal, and have the potential to contribute similarly towards good governance, starting with monitoring the use of money in politics.

The results of this study show that the spending limit set by the ECN may not be sufficient to reasonably finance campaign costs. On the other hand, the monitoring mechanisms used to enforce the limits were ineffective, thereby allowing candidates to easily exceed legal spending limits without reporting their expenditures.

The average vote percentage of the candidates who exceeded the spending limit was 41%, while candidates who spent below the limit only received 19% of the vote. This suggests a positive correlation between higher spending and a higher vote percentage obtained by candidates. However, there are many other factors which may influence an electoral outcome which were out of the scope of this study.

Although spending may not be the only reason for winning an election, the results clearly show that the average spending for candidates who won the election was much higher than those of who lost the election.

The top ten spenders spent over double the spending limit for other event costs, while the limit for transportation was on average exceeded by a smaller proportion (though still at an average of 74%). Similarly, eight out of the ten highest spenders exceeded the limits for office operation & representative deployment expenses by 10% on an average.

Two of these candidates spent just below the overall spending limit (7% and 8% below the limit respectively), while the third spent around NPR 1.9 million, and the fourth, less than NPR 800,000, or less than a third of the total spending limit. Again, only the categorized spending on campaign events was analyzed for practical reasons.

Of the two candidates who came closest to the overall spending limit, both spent more than double the limit for promotional/campaign materials; one of them spent above the limit for “other event costs”.

Particularly interesting is the finding that a candidate who was estimated to have spent only NPR 800,000 in total still exceeded the limit for promotional and campaign materials - spending NPR 112,000, or just above the NPR 100,000 limit. The candidate who spent NPR 1.9 million in total was also estimated to have exceeded the limit for campaign materials, in this case by nearly 70%.