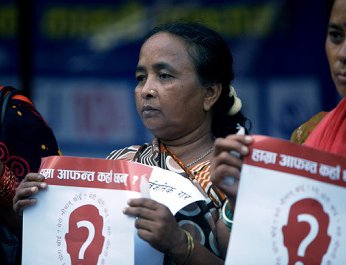 As the government has drafted a bill to amend Disappearance and Truth and Reconciliation Act, proposing waiver in sentence to cases related to conflict, it is likely to spark condemnations at the international level.

The new draft bill shared by the Ministry of Law, Justice and Parliamentary Affairs proposes to give jurisdiction to a special court to adjudicate conflict-era cases.

“The bill proposes that perpetrators will not get amnesty in serious human rights violations but could get waiver in sentences as per the prevailing laws,” said Minister Sher Bahadur Tamang.

He said perpetrators of serious human rights violations could get waiver of punishment up to 60 per cent if they did not reveal the truth and did not assist the court but if they assisted the court, revealed the truth, apologized to the victims and pledged not to commit such crimes again, then they could get a waiver of up to 75 per cent punishment.

A bill related to transitional justice proposes to amend the title of the existing Truth and Reconciliation Commission Act and also the contents of the bill as per the orders passed by the Supreme Court in the past.

Abduction, hostage taking, maiming, looting of public and private property, damage to others’ property, forcible eviction from one’s property and displacement are listed as other crimes where amnesty can apply. The bill proposes a maximum jail term of three years in other crimes. The bill also proposes to withdraw cases lodged by police officers against Maoist cadres.

Although minister Tamang said the draft was a preliminary document which could be amended after receiving feedback from victims and other stakeholders, the government seems to be in a mood to settle the cases sooner.

Minister Tamang said that there were over 1,000 cases lodged by police officials which would be transferred to transitional mechanisms. “As far as cases sub-judice in various courts is concerned, the government will abide by the Supreme Court’s verdict,” said Tamang.

The bill also states that the Office of the Attorney General will file cases against the guilty within two years from the date of recommendations made by the Truth and Reconciliation Commission and Commission of Investigation on Enforced Disappeared Persons.

Minister Tamang said that perpetrators of other crimes could be sent to open prison if they helped the cause of transitional justice and assisted the investigation.

“We have prepared the draft in a way that will ensure that perpetrators of the serious human rights violations cannot escape punishment and that the victims’ get justice,” Tamang said.

The bill proposes to have retroactive effects to ensure that the victims get justice and perpetrators do not escape punishment merely on the ground that the statute of limitation had elapsed, said a source involved in drafting the bill. The bill also proposes that victims’ families will be entitled to reparations from both the perpetrators and the government.

Book : Alternative Development Paradigm By A Correspondent 2 months, 2 weeks ago

BOOK On Indian Philosophy By A Correspondent 4 months, 1 week ago