Nepal Hopefully Will Be Removed From The EU’s Negative List

Nepal Hopefully Will Be Removed From The EU’s Negative List 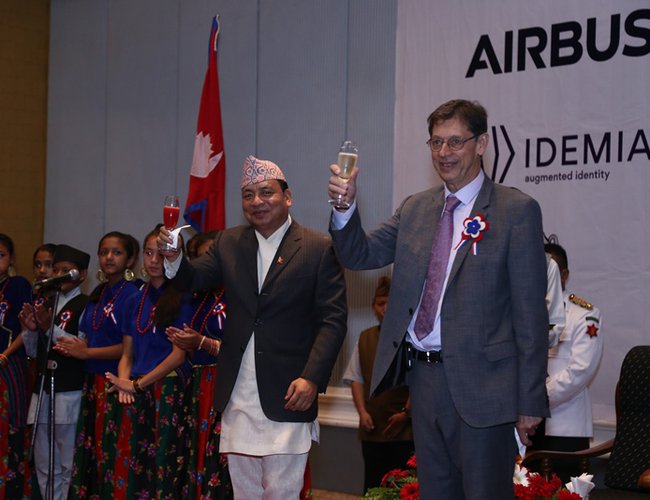 I am pleased and honored to celebrate again in your company the French national day. Since my mission in Nepal is coming to an end, and my career as well, let me have a look on the 2 and a half years I have spent here.

The start was challenging since the flight I had boarded from a Gulf country… returned back to the same airport a few hours later and hence I arrived very late at TIA – sorry for the then chief of protocol and my deputy who were waiting to welcome me !

In February 2016, the stigmas of the earthquake, the long hours of loadshedding and the long queues at gasoline stations due to the blockade gave a grim impression of Kathmandu, and so did our Embassy.

Everything has improved dramatically since ! Due to our good friend Kulman, loadshedding is now only a memory and the political situation, with the successful holding of elections last year, is now peaceful and stable.

As one of the questions I regularly get is regarding the future of the French Embassy, I take this opportunity to confirm you all that the French Embassy will remain in Kathmandu. It is alive and kicking and it will always try to take the Franco-Nepali relation to a higher level.

At the same time, Alliance Française, AFK, which had to relocate in Pulchowk,11 is booming, and the French international school has now close to 80 students and it will not stop at that mark. French language and culture in Nepal have progressed with the support of so many Nepali friends.

This year we had the pleasure to celebrate once again various cultural and gastronomic events with the support of AFK , such as the Night of Ideas, Good France, thank you Rika, and the Fête de la Musique. All these events helped to strengthen mutual understanding between Nepalese and French people.

A prestigious exhibition of Nepali historical artifacts is in the cards. With the support of the new Minister for culture Rabindra Adhikari, and the cooperation of the French National Museum of Asian Arts, musée Guimet, I trust we can find a practical solution to put together the best of what Nepal can show to the world. This projected exhibition would altogether promote visit Nepal year in 2020.

Similarly, I was proud to welcome recently at TIA the first of the brand new Airbus 330 of Nepal Airlines. France is constantly supporting the improvement of safety in Nepalese aviation. So with all necessary efforts, Nepal hopefully will be removed from the EU’s negative list.

That would also contribute to the development of tourism. French tourists have started coming to Nepal again after the recent earthquakes and I am sure the number will only increase. I crossed so many of them in my own trips in your beautiful country.

I also hope a new public transportation system incorporating a French made cable car will quickly be in service in Khatmandu which would diminish gas emissions, ease the traffic congestion, create a socially friendly transportation system and attract more tourists. More companies show interest for Nepal in the new context of stability and priority of development.

Ladies and gentlemen, as you know well, French citizens have elected a young and energetic President, Mr. Emmanuel Macron, and a deeply renewed Parliament.

They have started building a new forward looking France relying on a lot of reforms which will make our economy more competitive and our society more inclusive.

France has many leading and innovative companies in the cutting edge fields of today and tomorrow, such as State security, which remains a sector of major preoccupation in a world characterized by ever increasing types of threats. We recently celebrated the 5 million passports mark produced by MOFA with the support of OT Morpho, now Idemia.

Let me also say a few words about biotechnology, France being currently the third European country in terms of number of companies in this field and the second one regarding the number of technological innovations. This sector will continue to grow in the upcoming years with the support of the French government and the excellence of the medical research in France.

We know our development should be ecological above all. France has reached a top level in that regard, as a confirmation of our commitment to achieve a sustainable development in line with the Paris Agreement on Climate Change and the 2017 One Planet Summit.

While some countries seem to prefer isolation, France is self- confident enough to stay open and take a leading role in many international issues, starting with the fight against terrorism. Daesh (or ISIS) is losing the battle but it can still bite, including on our soil, so security remains a top objective in our policies in close cooperation with our allies from the EU and from the NATO and also with the African countries most threatened by terrorism.

France is looking confidently to new partners in a diverse world. President Macron has visited China and India. Last week, he was the first French President to visit Nigeria, an African giant of 190 million people. And today, Japan and Singapore were guests of honor to our parade on Champs-Elysées.

France believes in a world where the diversity of the nations goes along with a vibrant multilateral system. Nepal should have a bigger place in that regard considering its population and its international aura.

We will soon celebrate the 70th anniversary of our bilateral diplomatic relations and I trust it will be an opportunity for more significant events and cooperation.

Right honorable Vice President, ladies and gentlemen, during my two and a half years mission in Nepal as well as my four decades career in international relations, I had often in mind that sentence from Antonio Gramsci, the famous Italian communist leader : “pessimism of the intellect, optimism of the will” (which he borrowed from the French literature Nobel prize winner and pacifist Romain Rolland.)

Carmona was an ambassador of France to Nepal. Excerpts of the statement delivered at French National Day (Bastille Day) on July 14 July.

Ambassador of France to Nepal.