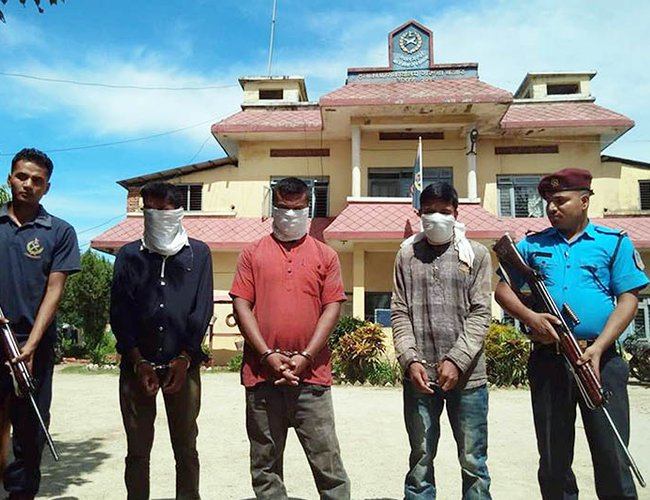 Three youth have been arrested on the charge of repeatedly gang raping a 13-year-old girl by holding her captive for two months, police said.

The suspects were made public today at the Garuda Area Police Office in Rautahat district after presenting them before the District Court which remanded them in custody.

The victim, who hailed from Pothiyahi in Garuda Municipality, was residing at Junglesahiya-4 of Gajura Municipality in the district before being abducted by three neighbouring youths in the midnight of May 7.

From there, the kidnappers took the minor to Sarlahi, Parsa district and then to Mainatar in Bihar of India. They held their prey captive in those locations for two months and repeatedly gang-raped her, according to police The Himalayan Times Reports.

The victim’s father lodged an FIR (First Incident Report) against Balistar Chaudhary (36), Dharmendra Chaudhary (24) and Jiyalal Chaudhary (19) for their involvement in disappearing his daughter.

Chaturbhuj Ojha, Police Inspector at the Garuda Area Police Office, said, “In coordination with CIB (Central Investigation Bureau of Nepal Police) and Parsa Police, we were able to rescue the victim from Birgunj Metropolitan City-8 on July 13.”

After preliminary investigation, the victim identified the suspects. Subsequently, police arrested Balistar from Kalaiya in Bara district and two others from Gajura Municipality.