NMA Calls To Close Down Medical Services Except Emergencies In Nepal

NMA Calls To Close Down Medical Services Except Emergencies In Nepal 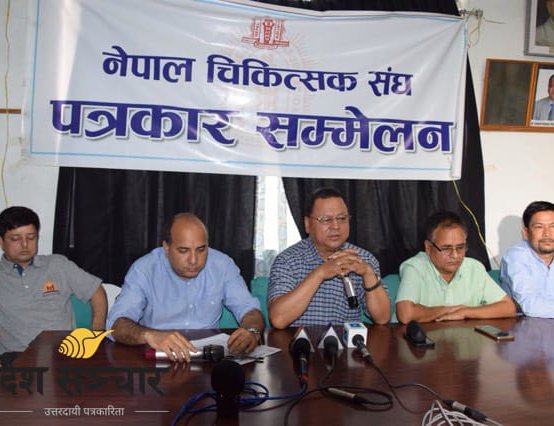 Nepal Medical Association (NMA) has announced that it will stop all medical services except emergency on Thursday (July 19). As the government has not taken any initiative to save Dr Govinda KC’s life, we are compelled to announce the shutdown of medical service reports Deshsanchar.

The government has failed to address Dr KC’s demands which are in line with the suggestions forwarded by a team of experts formed by government itself. It would be unfortunate if Dr KC loses his life over this, NMA said.

According to NNMA, the association has also announced plans to gather at Maitighar Mandala at 1:00 PM Thursday to mount pressure on the government.

Announcing the decision, Dr. Mukti Ram Shrestha, president of National Medical Association, has said that they approached the government’s team twice so far but they did not respond to their dmand.

The government team had not sought team members’ credentials yesterday, according to NMA President Dr Shrestha. He also said that they were unaware if Dr KC had sent any official letter to the government acknowledging them as his representatives.

Although the Cabinet had formed a three-member committee led by Secretary at the Ministry of Education, Science and Technology Khaga Raj Baral yesterday to hold talks with Dr KC, who has been on a fast-unto-death since June 30, the talk is yet to start officially.

Coronavirus: Study Suggests Elderly And Sick Are Most At Risk By NEW SPOTLIGHT ONLINE 6 hours, 20 minutes ago