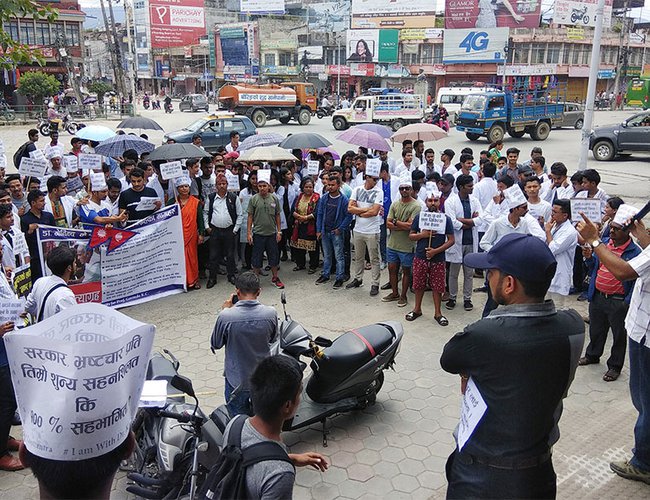 Thousands of people from across the country have expressed solidarity with Dr Govinda KC, pressuring the government to address his demands for medical education reforms. A march was organized in Pokhara-Lekhanath Metropolitan City of Kaski to pile pressure on the government to address Dr KC's demands. Civil society activists, businessmen, officials representing the medical sector, students, and general public took part in the rally.

It is also for the overall improvement in the country's medical sector,” he said. “But the government still turns a deaf ear despite repeated pleas from the public, which is very unfortunate.”Similarly, another speaker Dr Basanta Gautam criticized the government saying that it is discouraging those willing to contribute to the medical education sector rather than bringing reforms in the medical sector. Likewise, Nepal Student Union (NSU) organized demonstrations in Lahan of Siraha district.

Senior Orthopedic Surgeon Dr KC has been on a fast-unto-death for the last 22 days demanding reforms in the medical education sector.

Japan To Celebrate May 26 As “Hirotaka Takeuchi 14 of 8000m Mountains Summit Day By NEW SPOTLIGHT ONLINE 1 day, 19 hours ago