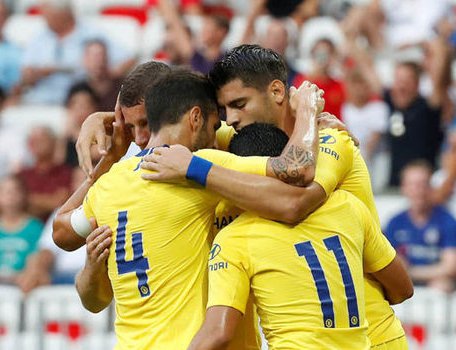 Maurizio Sarri once again, in his second game in charge, lined Chelsea up in a 4-3-3 formation, as he had done with his successful Napoli team.

It is a radical change from Antonio Conte’s 3-4-3, and it will mean some players, like Cesc Fabregas, Victor Moses and Olivier Giroud may well be worrying about their positions in a Sarri team.

Alvaro Morata, who had such a torrid time last season after a good start, again led the attack, as he had done in Sarri’s opening game against Perth Glory.

He needs to impress early on this season, if he stays (AC Milan are keen). His header from Fabregas’ was harshly judged offside. But he showed good skill to set up Pedro for his early goal, when Inter goalkeeper Samir Handanovic could only push out his shot and Pedro, who looked lively all game, rammed in the rebound. 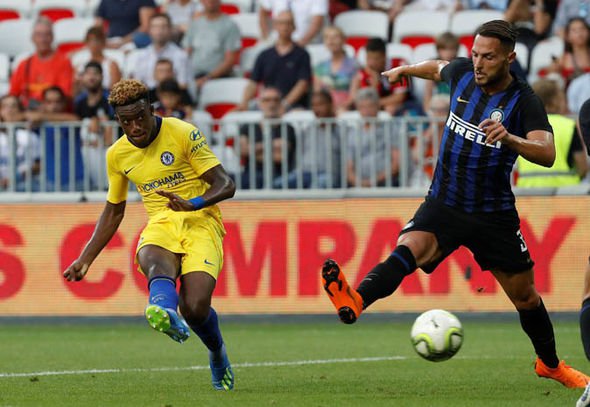 The new £50 million man Jorginho is clearly the man whom this new Sarri style Chelsea will revolve around.

The Brazilian-born Italy international was everywhere, dropping deep, picking up every ball, tidying up and starting attacks.

His energy, and short, quick and accurate passes kept things moving and are clearly the way the coach wants his team to play.

Inter craftily kept attacking Chelsea with wide men – and got a lot of joy. Antonio Candreva kept getting in behind Marcos Alonso and should have scored with one low shot. When Roberto Gargliadini levelled the scores at the Allianz Riviera stadium, it was with another strike which came from a move down the right hand side, after Tiemoue Bakayoko gave the ball away.

Callum Hudson-Odoi though was once again the star, as he had been in Australia.

The 17 year old is lighting quick, and equally good with his left or his right foot, cutting in from the left, taking players on and letting fly. He had one shot saved and several times left experienced Inter defenders standing with his intricate and cheeky skills. It is notoriously difficult to make any firm predictions from pre-season, but the Londoner looks like a prospect.

Chinese Embassy Issues A Strong Protest Against An Article Published In English Daily By NEW SPOTLIGHT ONLINE 6 hours, 22 minutes ago