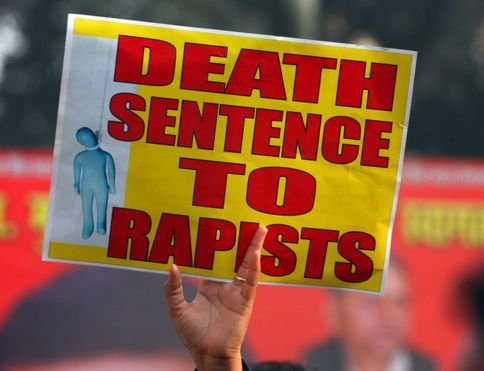 India's lower house of parliament passed a bill on Monday that will see the death penalty handed out to anyone convicted of raping a child under 12.

The amendment to the Prevention Of Child Sex Offences (Pocso) act was made at the behest of Women and Child Development Minister Maneka Gandhi, who said she believed this would deter sexual crimes against children.

It came soon after a series of high-profile cases against children, including the rape and murder of an eight-year-old girl in Indian-administered Kashmir, and the more recent rape of a young girl in the central Indian state of Madhya Pradesh.

In 2013, following the outrage over the rape and murder of a medical student aboard a moving bus in the capital Delhi, the government announced that the death penalty would be applicable to those convicted of rape resulting in death.

The new amendments will enable a court to hand out a death penalty to someone convicted of raping a child under 12, even if it does not result in death.

Despite these changes to the law, however, India is a country that is reluctant to carry out the death penalty. It is currently prescribed only for the "rarest of rare" cases - the interpretation of which is left to the court. The country's last execution was on 30 July 2015.

Although welcomed by many, the new amendment has also been criticised by a number of activists who have questioned whether the death penalty is really an effective deterrent.

This is a question that has been debated around the world - does toughening the sentence actually reduce crimes? Some evidence from neighbouring countries would suggest otherwise.

Experts in the region say that a major argument against imposing the death penalty for rape is that it actually deters the system from handing out convictions.

Activists in India say that in many cases police tend to broker compromises, encouraging survivors, under threat or coercion, to withdraw their complaint, so that the accused is set free on the basis of "low probability of conviction".

Robust laws would in fact have a very limited impact in reducing the crime unless they are accompanied with a change in the attitudes of the police, judiciary, government officers and society.

Chinese Embassy Issues A Strong Protest Against An Article Published In English Daily By NEW SPOTLIGHT ONLINE 6 hours, 36 minutes ago