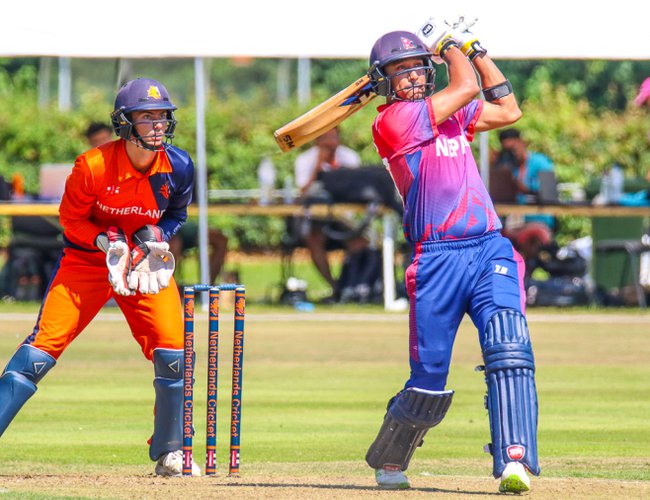 This script is starting to get a bit too cliche for Nepal. At WCL Division Two last February in Namibia, they triumphed in a trio of edge of your seat nailbiters that went down to the final wicket or final ball, or both, with their batsmen in the middle. A slight rewrite to the screenplay needed to be made at the VRA Ground, with Nepal in the field defending two off the final ball and one Dutch wicket left.

But in the end, the result remained the same. Paras Khadka's Cardiac Kids pulled off another heartstopping win as the captain himself secured the victory by running to rip out the non-striker's stumps with ball in hand in a dramatic run-out for Nepal's first ever ODI victory in just their second match.

When Sandeep Lamichhane foxed Shane Snater with a googly for his third wicket of the match, it left the final Netherlands pair of Fred Klaassen and Paul van Meekeren needing 32 off the final 39 balls to win. Nepal know all too well that victory was not a foregone conclusion having added 51 for the final wicket to win off the final ball against Canada six months earlier. After van Meekeren survived a few lbw shouts to end Lamichhane's final over, he nearly pulled a Nepal with Klaassen by his side.

The pair took the equation down to six off the final over as Khadka put the responsibility on his own shoulders by keeping the ball in his own hands. Having been a bystander for all three stunning finishes in Namibia, he played a starring role in this success having scored his maiden ODI fifty to underpin Nepal's total of 216 before Sompal Kami followed Khadka's exit with a brilliant counterattacking 61 off 46.

Khadka took to bowling back-of-the-hand slower balls and legcutters for much of the final over, keeping the last pair off balance. A single by Klaassen to the leg side to start the 50th was followed by a firm drive to cover by van Meekeren for a dot. Khadka thought he'd won the match on the next ball, fooling van Meekeren with a slower ball that was lofted just short of long-on for a run. The fourth ball was guided behind point to the sweeper for two, leaving two off two balls for the Dutch to win.

Nepal thought they had secured victory once more on the fifth ball when Klaassen's attempted flick on a delivery down the leg side produced a big noise but umpire Sarika Prasad ruled it came off the pad and not the bat. Rather than draw out the moment, Khadka got straight back to his mark to charge in for the final ball. Klaassen middled a fullish delivery, but too well for the Dutch cause as his scorching straight drive ricocheted off the stumps and came back toward Khadka. The Nepal captain spun around in his follow-through to pick up the ball and beat Klaassen in a footrace to the non-striker's end as he ripped a stump out - the bails were already dislodged by the shot - to complete the run-out that clinched another famous Nepal win.

Kami dented the Dutch chase just two balls in when he bowled Stephan Myburgh with an inswinger for a duck. Fifteen-year-old debutant Rohit Paudel made his presence felt seven overs later when he tracked down Ben Cooper's miscued drive skied over extra cover before laying out full-extension for a magnificent one-handed catch to give fellow ODI debutant Lalit Bhandari his maiden wicket.

But the next 20 overs produced little joy for Nepal as Netherlands cruised in pursuit of the target at 114 for 2 behind a half-century from Wesley Barresi. It took Lamichhane striking twice in three balls in the 29th over to spark a dramatic collapse. Dan ter Braak was given lbw stuck on the crease as he played down the wrong line to a flipper while Bas de Leede's charge down the crease two balls later went awry to leave him stumped.

Khadka took a sharp catch at slip 15 balls later to remove Wednesday's Man-of-the-Match Michael Rippon for 3 off the bowling of Basant Regmi. Having chosen an extra batsman in the starting XI today, with Paudel and Subash Khakurel both making their ODI debuts in place of the retiring Shakti Gauchan and the injured Sharad Vesawkar, Khadka turned to Dipendra Singh Airee's part-time offspin and he responded by dislodging Barresi with a quicker ball that struck the Dutchman on the toe to be given lbw for 71 as Netherlands fell to 143 for 6.

Scott Edwards fell to Bhandari leg before while Khadka got revenge for his first innings dismissal at the hands of Seelaar by having the Dutch captain caught by Malla at backward point to put Netherlands eight down. With his final two overs held back by Khadka, Lamichhane returned to bowl Snater and set up the dramatic finale.

Nepal's first innings total was almost a carbon copy of their win two years earlier at the VRA in the WCL Championship when they scored 217 in a 19-run win. On that day, Khadka was provided the backbone with 84 off 96 balls. He stepped up once again with the bat on this occasion after choosing to bat first at the toss.

Khadka entered at 34 for 2 at the start of the ninth over and held firm in the face of a searing opening spell from Klaassen. The left-arm seamer had already claimed the first two wickets and followed it with a third when opening batsman Khakurel was beaten for pace and bowled for 19. Khadka saw off the rest of Klaassen's initial seven-over burst before setting his sights on Seelaar, clocking him over long-on for a pair of sixes the latter of which brought up his half-century.

Khadka was successful with the reverse sweep as well but when he tried the orthodox sweep on a rare occasion he wound up top-edging Seelaar to fine leg for an easy catch. At 135 for 6, Nepal's innings didn't appear to have much steam left but Kami's fiery yet orthodox strokeplay catapulted them back into contention.

When Aarif Sheikh and Regmi fell, Kami began turning down singles with No. 10 Lamichhane out in the middle, yet he still scored at a phenomenal rate. He had a close shave in the 40th over when a skied swipe off Seelaar just eluded Snater on the deep midwicket rope for six. Having carted a half-tracker from Rippon over the deep midwicket rope earlier, his third six brought up a half-century in just 38 balls when he lifted a length ball from Klaassen over long-on.

Kami finally fell backing away too far to cut Rippon at the start of the 46th to make it 204 for 9, leaving Lamichhane with Bhandari to stretch the innings out. They added 12 more runs and it took every one of them to ensure Khadka could pen the final few words of a slightly-altered winning script.