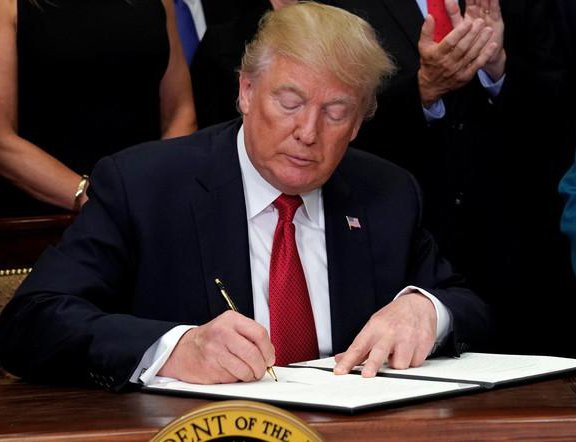 The United States has reemployed sanctions on Iran that it lifted just two years ago. resident Trump expressed his concern for the “long-suffering Iranian people” and the national security interests of “our allies” — and then announced that his administration is moving forward with a plan to immiserate the Iranian people and undermine a vital national security interest of America’s European allies.

In a statement, the White House confirmed that the United States will restore a battery of sanctions on Iran that had been lifted by the 2015 nuclear deal. Under the terms of that landmark diplomatic agreement, the U.S. promised Britain, France, and Germany that it would suspend sanctions on companies and countries that did business with Iran, so long as Tehran suspended its nuclear weapons program. Firms from those nations proceeded to make investments and forge business relationships in Iran. The Iranian regime ditched its highly enriched uranium, tolerated an invasive inspection program, and fully complied with its obligations under the agreement.

President Trump withdrew from the multilateral deal, known as the Joint Comprehensive Plan of Action (JCPOA), for “disastrous flaws” that he said posed a security threat. The return of U.S. sanctions is intended to restrain Iran’s behavior beyond nuclear controls but runs the risk of reviving a program to develop atomic weapons, experts say.

BBC world Service reports that measures targeting Iran's automotive sector as well as its trade in gold and other key metals will take effect from 09 AM Nepali Time.

Trump believes the economic pressure will force Iran to agree to a new deal and end its "malign" activities. Iran's President Hassan Rouhani said the act was "psychological warfare".

Responding on Iranian state television, Rouhani rejected the idea of last-minute talks. "We are always in favour of diplomacy and talks... but talks need honesty," he said.

According to Council On Foreign Relations online, Iran’s trade in gold and other precious metals; and the sale to Iran of auto parts, commercial passenger aircraft, and related parts and services. The second set of sanctions, which comes back into force on November 4, restricts sales of oil and petrochemical products from Iran.

The Trump administration has so far rejected requests by foreign governments and companies that would allow them to continue to conduct business with Iran.

European signatories of the JCPOA are reported to be preparing a package of economic measures to try to salvage the deal. Additionally, the European Union will activate, effective August 7, a law “to protect EU companies doing legitimate business with Iran from the impact of US extra-territorial sanctions," said a joint statement from EU members of the JCPOA.

The U.S. moves have already contributed to a run on the rial and triple-digit inflation as Iranians scramble for the safety of U.S. dollars and gold. They also come amid months-long protests in Iran over deteriorating economic conditions and charges of corruption and mismanagement. Protesters have targeted the government of President Hassan Rouhani, who championed the nuclear deal as a way of boosting the economy, as well as more hard-line parts of the regime, such as Supreme Leader Ali Khamenei, who has criticized the JCPOA.

Other Factors to Watch

Some estimates say Iran’s oil exports, valued at $36 billion in 2016, could drop by up to two-thirds this year with the reinstatement of sanctions. That could have ripples beyond Iran as global oil markets cope with supply strains.

The overall value of EU trade with Iran in 2017 was about $23 billion, with three-quarters of it related to energy deals. If other parties to the JCPOA are unable to continue their revived business with Iran, Iranian leaders are expected to walk away from the deal.

Prospects for diplomacy to resolve the dispute over Iran’s nuclear program appear remote. U.S. Secretary of State Mike Pompeo has laid out conditions Iran must meet to ease sanctions, including ending destabilizing actions in the region, such as its support for Houthi rebels in Yemen and Hezbollah. Iranian officials, however, regard these demands as tantamount to seeking regime change.