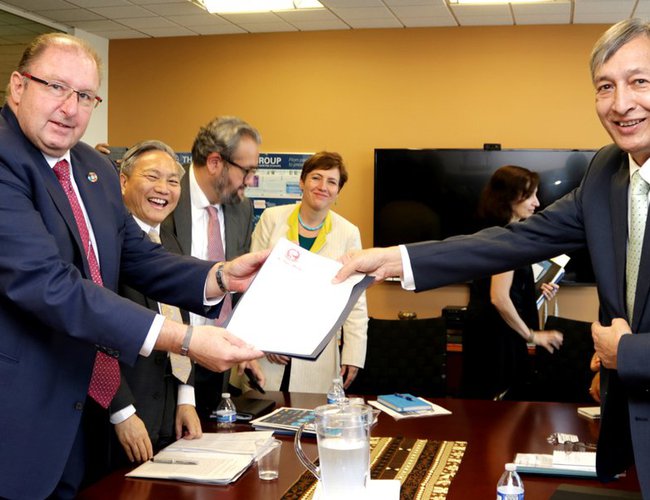 The World Bank Board has approved a fourth Financial Sector Stability Development Policy Credit (DPC4) of $100 million to help Nepal continue to deepen its medium-term reform program in the financial sector.

The World Bank Group’s Board of Executive Directors also strongly supported Nepal’s quest to secure a stable path to federalism and an inclusive and prosperous future. The board also discussed a new Country Partnership Framework (CPF) for Nepal for the next five years in Washington D.C.

According a press released issued by the World Bank, Nepal is undergoing a historic transition. The new Consitution adopted in 2015 defines Nepal as a democratic, decentralized, federal and secular republic. The country’s 2017 elections at the federal, provincial and local levels resulted in a super majority government for the first time in its parliamentary history. Welcoming the prospects of stability, the World Bank Group, in the CPF, pledges its support to strengthen institutions that are critical to the effective implementation of federalism, as well as innovative pathways to faster, equitable growth and accountable service delivery.

“Nepal’s transition to federalism unlocks opportunities for all citizens to participate in its development,” said Qimiao Fan, the World Bank Country Director for Bangladesh, Bhutan and Nepal. “This represents a window of opportunity for the country to further reduce poverty, increase the income of the bottom 40 percent, and pursue its ambitious agenda of inclusive growth and accountable service delivery,” he added.

The CPF notes that the federalism agenda will underpin the World Bank Group’s future programs at the strategic, policy and operational levels. It also cautions that transitional vulnerabilities could heighten in the early days of federalism as development roles are adjusted and the new structures take root. Against this background, the CPF focuses on three areas of engagement: (i) strengthening public institutions for economic management, service delivery and public investment; (ii) promoting private sector-led jobs and growth; and (iii) enhancing inclusion for the poor, vulnerable, and marginalized groups, with greater resilience against climate change, natural disasters, and other exogenous shocks.

The CPF priorities emerged from extensive consultations with the federal, state and local governments, development partners and key stakeholders including civil society, academia, the private sector, rural community groups and the media. This includes hearing from over 200,000 citizens across Nepal through SMS and online surveys. The framework aligns with the government’s development priorities and Nepal’s goal to graduate to middle income country status by 2030.

“This partnership strategy with the World Bank supports our goal of giving every Nepali equal access to security, justice, good governance, basic services, and an opportunity to participate in our future prosperity,” said Nepal Finance Minister Yuba Raj Khatiwada. “The new partnership strategy with the World Bank Group is focused on supporting our transition to federalism, fits squarely within our vision and underpins a Nepali-owned model.”

The CPF notes that Nepal will require significant financing – over and above public and development aid resources currently available – to achieve faster growth and accelerate poverty reduction in the context of its transition to federalism. The World Bank Group will apply ‘Maximizing Financing for Development’ approaches to optimize the use of scarce public resources and leverage commercial private financing in Nepal. The CPF states that the government’s development model of growth fueled by higher levels of investment, productivity and effective public institutions to underpin private sector dynamism will require carefully calibrated reforms to draw in private investment in parallel with the implementation of federalism.

“We will expand our investments — both debt as well as equity — and advisory services for private investment in Nepal,” said Wendy Werner, International Finance Corporation’s country head for Nepal, Bangladesh, and Bhutan. “Our efforts will encourage high-quality private investors to support the government’s strategy of inclusive development.”

The Financial Sector Stability Development Policy Credit (DPC4) of $100 million, approved by the World Bank Board today, is the final in a series of financial sector DPCs that was initiated in 2013 and has since supported a government-led program aimed at stabilizing the sector by reducing vulnerabilities and increasing transparency. In this phase, the program has focused on implementing key reforms through a strengthened legal and regulatory framework, consolidating the financial sector, placing the financial sector safety net on a firm footing and laying the ground for a further program of reforms to broaden and deepen access to financial services for both business and individuals.

“The World Bank currently supports 21 active investment projects in Nepal with US$ 2.5 billion dollars in commitments from IDA. The indicative resources available under IDA18 (FY2018-2020) are about US$ 1.3 billion, including US$ 300 million from the IDA Risk Mitigation Regime. During the IDA17 period (FY2015-2017), the World Bank committed US$ 1.2 billion. IFC aims to commit about US$ 800 million to US$ 1.2 billion over the five-year period. MIGA is actively seeking opportunities to support foreign private investment into Nepal. IFC and MIGA may make use of the IDA IFC/MIGA Private Sector Window (PSW) and the MIGA Guarantee Facility to underwrite eligible projects,” writes a press release.

The World Bank Group (WBG) fielded its first economic mission to Nepal in 1963 to assess the country’s development prospects and challenges. It approved its first credit in 1969 for a telecommunications project. Since then, the World Bank has provided Nepal US$ 4.75 billion in assistance (US$ 3.48 billion in credits and US$ 1.27 billion in grants).

COVID-19 Economic Implications By A Correspondent 4 days, 12 hours ago