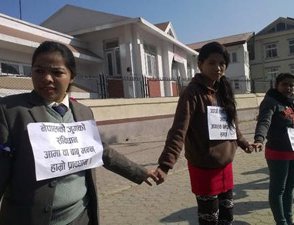 With proposing to grant citizenship certificates to children of citizens by birth and non-resident Nepalis residing in countries other than SAARC countries, cabinet registered a Citizenship Act 2063 amendment bill in the House of Representatives. The amendment bill proposes that a child born to a Nepali mother whose father is unknown will be entitled to citizenship by descent. But the citizenship by the descent of the child who was born to a Nepali mother will be converted to naturalized citizenship if it is found that his/her father is a foreign national and the child has not obtained citizenship of the foreign country on the basis of his/her father’s nationality.

According to The Himalayan Times, the bill proposes that Non-Residential Nepali will be given Nepali citizenship allowing them to enjoy economic, social and cultural rights, but not political rights.

The bill also proposes process to simplify citizenship application as it proposes to remove the proviso of Section 8 of the Citizenship Act which requires the applicants to submit copies of citizenships of their relatives from three generations of mother or father’s side reports The Himalayan Times.