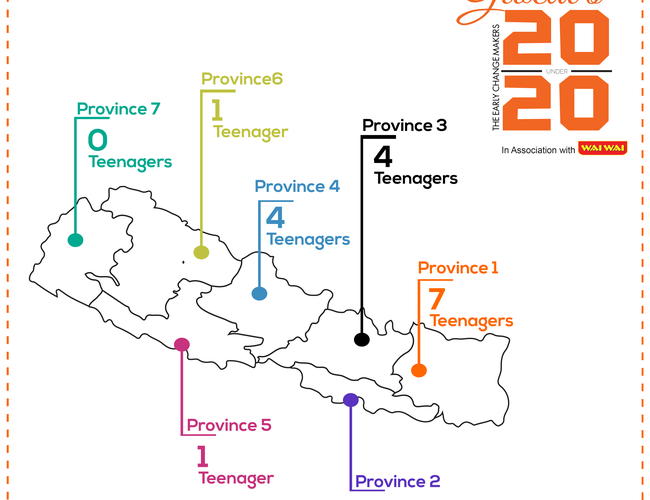 Wai Wai and Glocal Pvt. Ltd. together have unveiled the list of 20 brightest and influential Nepali teenagers under the age of 20. These teenagers are from various diverse fields ranging from social work, child right activism, computer programming, science, journalism, technology, and entrepreneurship among others.

According to press release issued by Wai Wai and Glocal Pvt. Ltd., the annual list of game changers seeks to recognize and honor the exceptional teenagers from various fields. Glocal’s 20 under 20 is an umbrella title for 20 early change makers, who are teenagers from diverse fields, stepping out to create an impact in the society.

Releasing the list, Asish Thakur, Executive Director of Glocal Pvt. Ltd., said, “We are unveiling this list for the second year now and so far, I am delighted to see these young minds grow and thereby help their society prosper. In one hand, they have proved to be a strong team of likeminded teens and in another, the future leaders.” 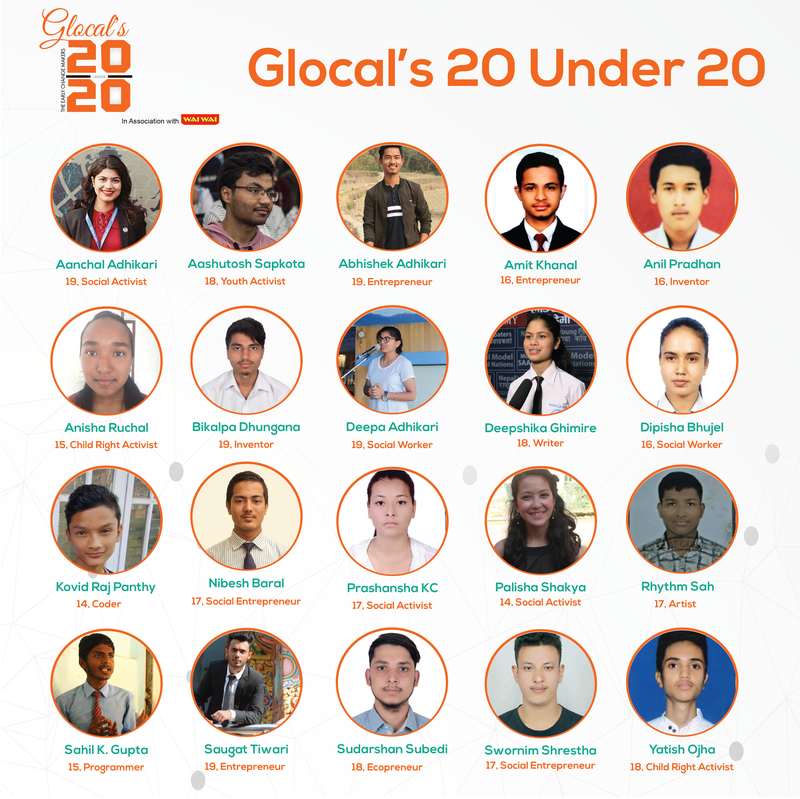 The selected teens are:

The 20 young inspiring changemakers were selected by a respected jury panel through an intense selection round for the impacts they have created in the society. These teenagers were selected from a pool of 530+ applications from across the nation. The selected teenagers will be honored amidst the Grand celebration of Wai Wai Glocal Teen Hero 2018 award on September 1, 2018 at Soaltee Crowne Plaza.

Throughout the year, Glocal’s 20 under 20 shall work cohesively for identification of opportunity, fostering networking and collaboration and doing works to create an impact in the society. They are expected to use their existing knowledge and experience to initiate works and enhance their leadership and other qualities. Also, paving their way towards becoming future leaders by being interactive and proactive.

Stories of these youths will be published at Glocal Khabar. For info about Glocal’s 20under20, visit:http://glocalteenhero.com/20under20/

To make the program a grand success, this year, Glocal has partnered with Wai Wai as a title sponsor, European Union and UNDP as Strategic partner, Coca-Cola, VOITH, Panchakanya and Honda as Partners, Turkish Airlines, Yeti Airlines as Airlines Partner, Prisma Advertising as Creative Partner. It is promoted by SAARC Chamber of commerce and industries and Nepal Tourism Board. In addition, Soaltee Crowne Plaza is the initiative partner. Sparrow SMS is the SMS Partner. The initiative is supported by Tara Air, Landmark education, Worldlink, IMS Group, IME, AYON, YUWA, Restless Development, Facts Nepal, SmartDoko and View your choice. Partnership with various such organizations working on youth-segment helped the program reach every nook and corners of the country, and ensured no teenagers having talents and potential were left-out from the competition.

Meanwhile, the list of 6 finalists for Wai Wai Glocal Teen Hero 2018, the only national platform in Nepal to recognize and honor the outstanding teenagers, is also going to be announced soon. Congratulations to Glocal’s 20 under 20 !

Prohibitory Order Imposed In Rasuwa For A Week By Agencies 5 hours, 57 minutes ago

Nepal Has Suspended All International Flights By May 31 By NEW SPOTLIGHT ONLINE 17 hours, 12 minutes ago

DAOs Extend Prohibitory Order In Kathmandu Valley Till May 26 By Agencies 23 hours, 18 minutes ago

Kathmandu Valley Will Be Under Prohibitory Order For 15 Days By Agencies 1 day, 20 hours ago