Korean Company To Start Construction Of Upper Trishuli-1 From January

Korean Company To Start Construction Of Upper Trishuli-1 From January 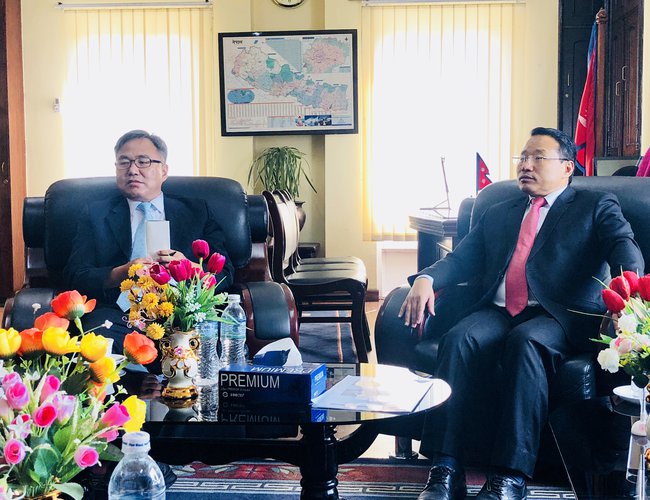 Minister of Energy, Water Resources and Irrigation Barshaman Pun expressed his commitment that the present government is committed to protect interest of foreign investors including Koreans.

Talking with ambassador to Republic of Korea Park Yong- Sik, minister Pun expressed the hope that Korean company will start the construction of Trishuli-1 project soon.

Minister thanked Korean government supporting Nepal in the areas of education, health and infrastructure sectors. Given the example of Chameilya Hydro-power project, minister Pun said that the project is the game changer in the far-western region of Nepal.

According to a press release issued by Minister Pun’s secretariat, he urged Korean investors to come to invest in Nepal. He has made it clear that after constitution of hedging fund all the problems related to repatriation of currencies will be solved. ““I have already talked with Nepal Rashtra Bank on Hedging Fund. I will take all the initiative to solve the issue,” said minister Pun.

During the meeting Korean Ambassador to Nepal Park Yong- Sik said that 216 MW Upper Trishuli-1 project is very important for Nepal’s development and explained the progress made so far. Ambassador also thanked minister Pun for taking initiative for Hedging Fund.

He also informed Minister that Korean Company will start the construction of the project in January 2019. Representative of the company, who also attended the meeting, informed that 450 million dollar project will announce the financial closure soon. He also said that the project will complete in time. Korean South East Power Company Ltd has 52 percent stake in the country. Other shareholders are Delim Construction Company Ltd 16, Kerung Construction Company 10, IFC 12 and 10 percent for Nepali partner.

The Government Will Bring A Relief Package: Minister Pun By NEW SPOTLIGHT ONLINE 2 weeks, 6 days ago