Germany And Nepal Share So Many Views And Projects

Germany And Nepal Share So Many Views And Projects 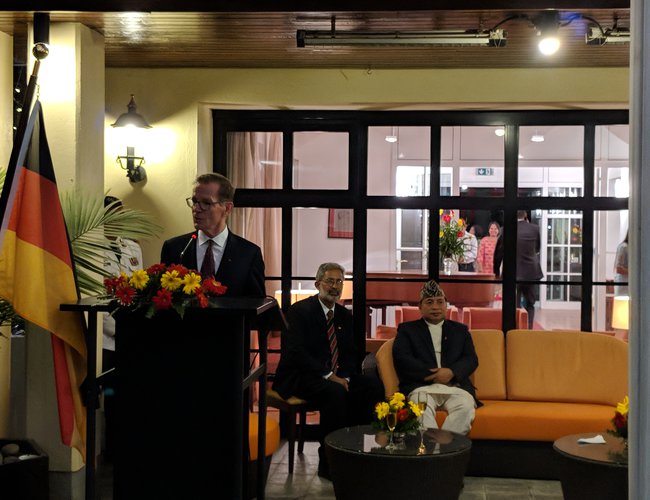 Europe faces great challenges today: the territory of some European countries like Ukraine is being quarreled over; the prosperity gap between the European Union and the world has turned the Mediterranean into a grave for so many migrants, populist reflexes put democracy at risk, and even the membership of the European Union is no longer a given for all its members.

But we must not forget the huge surge in stability, prosperity - and peace, which this day, this epoch, has brought about. Despite all the questionings which we face today, there is no doubt that the year of 1990 and its follow-up have generally strengthened, not weakened the European Union as a global actor. ´

We are often victims of an abstract, idealistic view of what the Union should achieve. But if we look at it from a realistic viewpoint, if we simply compare today’s European Union to the situation before 1990 or to other region’s integration efforts, there is no room for disappointment, frustration or disengagement.

Today even more than 27 years back, the Day of German Unity is a day of European Unity. This is the framework in which German foreign policy evolves. And accepting global responsibility in the face of common challenges– as a nation state and as a member of the European Union, that is its order of the day.

Germany and Nepal share so many views and projects. 60 Years of diplomatic relations - which we are celebrating this year - have brought about trust and a common outlook. I am proud to say that we share the common commitment for effective multilateralism.

Germany is grateful to Nepal for its support in the election to the rotating membership of the UN Security Council. Germany strongly feels the responsibility, during its tenure, to turn the UN-SC into an active catalyst for multilateral peacemaking, peace-keeping and trust-building between nations small, medium and big - all being treated as possessing equal rights and legal obligations. Germany also feels in tune with PM Oli’s demand for a reform of the Security Council which would bring it in step with today’s realities.

I salute the courage of Nepali peace-keepers in United Nations peace-keeping operations. However, I personally believe that Nepal’s Comprehensive Peace Agreement of 2006 and the peace process which followed, remain Nepal’s biggest contribution to the United Nations’ quest for peaceful conflict resolution and cooperation. Two important parts of the Agreement have been successfully implemented. I salute this success. I also salute the political commitment, recently taken by Prime Minister Oli himself in front of the General Assembly of vigorously tackling the third part of the comprehensive peace agreement - transitional Justice. It will best be done with a victim centric approach, and in full respect of Nepal’s international obligations.

On Climate change, after the Paris agreement, we also share the basic idea: pacta sunt servanda. Implementation is the word of the day. I am pleased that this year, Nepal joined the multilateral partnership – co-founded by Germany – on the national determined commitments. Nepal also welcomed a scoping mission 2 months ago – an opportunity to improve access to climate finance and share knowledge about implementing those commitments.

Germany strongly supports work on the European Union’s Connectivity strategy. It is a big European offer to create connections between Asia and Europe in a sustainable, comprehensive and rules-based way. For sure, Nepal’s future is at stake: integrating into the world economy, linking up through infrastructure, but also through building trust as an honest broker in the region, through the rule of law, good regulation and guarantee of intellectual property.

I am very happy with the outcome of our bilateral cooperation. In the sixtieth year of our diplomatic relations, both governments have agreed that Germany will spend - in the next two years - 55,6 Million Euro for Energy, Health and Sustainable economic development through GiZ and the German development Bank KfW in Nepal. I will not forget to mention the presence of the Physikalisch Technische Bundesanstalt, which is promoting regional quality standards for industrial production and trade.

We have supported Nepal through sixty years - a cooperation for mutual benefit and with mutual trust. This is a huge opportunity for the future.

Roland Schäfer is the ambassador of Germany To Nepal Excerpts of the statement delivered during the celebration of the Day of German Unity.

A Momentous Partnership – Nepal And Germany Today
May 21, 2018

The Impacts Of COVID-19 On Women-Owned Businesses By Novela Acharya 2 days, 9 hours ago