The inaugural session was commenced by The Honourable Vice President of India, Shri M Venkaiah Naidu, alongside Dr Kiran Kumar, Former Chairman of ISRO and Lt Gen DB Shekatkar, president of FINS. During the conference, over 30 presentations were delivered by an impressive array of scientists, academicians and diplomats on different space related subjects, such as space security, space tourism, the issue of space debris and challenges and opportunities of space partnership. 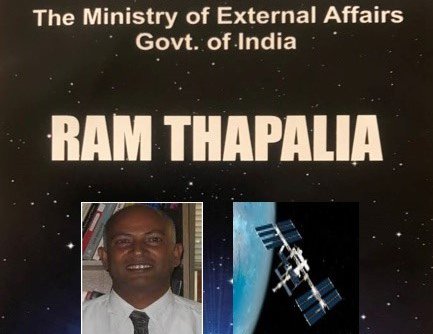 The 2018 Space Partnership Conference was hosted by Forum for Integrated National Security 0(FINS) in partnership with the Ministry of External Affairs and the State government of Goa, India. The conference was attended by representatives from over 45 countries, including scientists, delegates, academicians and diplomats. They came together to discuss Space Partnership in the context of security, diplomacy, economy and other issues.

Drawing on more general discussion, the conference was rooted in the subject of Space Diplomacy. Referring to the diplomatic or international activities related to space programmes, technologies, research and exploration. Traditionally, the security concept considered the domains of Land, Sea and Air. But, today, many countries are forced to consider the more unconventional security threats, such as the role of Cyberspace and Outer-space and their impacts on the global community.

The inaugural session was commenced by The Honourable Vice President of India, Shri M Venkaiah Naidu, alongside Dr Kiran Kumar, Former Chairman of ISRO and Lt Gen DB Shekatkar, president of FINS. During the conference, over 30 presentations were delivered by an impressive array of scientists, academicians and diplomats on different space related subjects, such as space security, space tourism, the issue of space debris and challenges and opportunities of space partnership.

Dr Ram Thapaliya, Chairman of the Institute of Crisis Management Studies and former Disaster Management/Security Advisor to the former Prime Minister of Nepal, was invited as a guest speaker at the event. With an impressive and extensive career in the field of Crisis Management, he is an advocate of Nepal’s strategic foreign policy engagement and has served as an international secretary of the Congress Party Foreign Relations Department and a Good will Ambassador of the USA, as awarded by former President Bill Clinton.

Dr Thapaliya delivered a presentation on the “Regional Cooperation and space Diplomacy; constructive knowledge based Global Partnership”. Alongside the session panel that included Dr B N Suresh, Former Director of the Sarabhai Space Centre, Israeli Ambassador to India, Daniel Carmon and Professor Dr Arvind Kumar, Head of the Department of Geopolitics and International Relations at Manipal University.

Dr Thapaliya focused on the aim and benefit of Space Diplomacy to enhance socio-economic conditions of developing nations and the mission to achieve sustainable development, a critical component for all. Furthermore, he discussed the role of Space diplomacy as a vital tool to address common challenges facing humanity and an opportunity to build constructive knowledge based partnerships. He discussed the importance of space partnerships as a tool to address the common problems faced by the world, such as environment, agriculture, global health, natural resources and disaster management and humanitarian assistance etc. Drawing on space economy, society and accessibility, Dr Thapaliya placed emphasis on the importance that in this context, we must also acknowledge and value the perspective of smaller economic and developing/under-developed countries with no space presence who have a significant reliance on those countries with active space programmes. Discussing the importance of space exploration and research, Dr Thapaliya focused on the role of partnerships based on involving these developing nations that may not have the economic capacity to launch space programmes independently. In addition, Dr Thapaliya clarified that Nepal has taken a definitive stance against the militarization and weaponization of outer space, favouring it as neutral territory. He added that the role of space diplomacy is important for ensuring cooperation and through Impartiality, neutrality, the voluntary participation of Space Partnership, the global community will be better equipped to address the common challenges and issues that our world faces.

The conference was concluded by the Honourable Governor of Goa, Smt Mridula Sinha, Dr G Satheesh Reddy, Chariman of DRDO and Prof. Varun Sahni, VC of Goa University. The conference was brought a Close by highlighting the role of Space partnership as a vital forum for global cooperation and development that can provide opportunity for all. Located between the two giant superpowers of India and China that have already established advancing space programmes, it is in Nepal’s best interest to determine a very clear space policy and ensure that it’s Law and By-laws align with International space law. Nepal government need to keep in priorities to resolving our development challenges and it is urgently required space policy to mobilize domestic resources, and international cooperation.

This conference has provided the Government of Nepal with an advantageous opportunityto act now to pursue further discussions and advancements with the pool of experts and actors that are available to them locally.

World AIDS Day 2022: The AIDS Response Is In Danger By NEW SPOTLIGHT ONLINE 10 hours, 15 minutes ago