After years of high fertility rates and high growth of population, Nepal’s population scenario is rapidly changing. With the decline of fertility rate and birthrate, there is a gradual but drastic decline of the young population. If the government does not take actions, Nepal will be an aged society by 2054 from a younger nation. 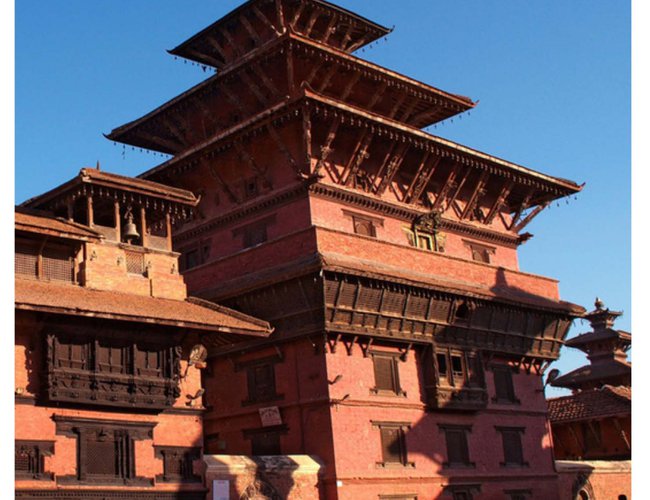 As contraceptives and anti-pregnancy drugs are available in all medical stores and people prefer fewer children now, Nepal’s birthrate is declining, which is likely to push Nepal into a major demographic crisis. It’ll lead to a high number of old people in just a matter of 36 years from now.

After decades of efforts directed to reduce the fertility rate and population, the behaviour of Nepalese has changed in favour of a few children. With the availability of contraceptives, other intervention methods and enhanced Reproductive Health Rights, including legalising abortion, there are enough ways to prevent the birthrate.

As the government lacks proper investment in education to promote quality of young population for the future, this is likely to contribute to the reduction of the young population.

The recently released study report on the demographic changes of Nepal has showed that Nepal is heading to become an ageing society with the decline of the young population and changes in its composition towards fewer children and increased number of elderly population.

The study Demographic Changes of Nepal: Trends and Policy Implications reveals the alarming scenario of Nepal’s demographic structure. This is a work done through a tripartite collaboration between the National Planning Commission, UNICEF and the Population Council, New York. Discussion on ageing population in South Asia started recently. 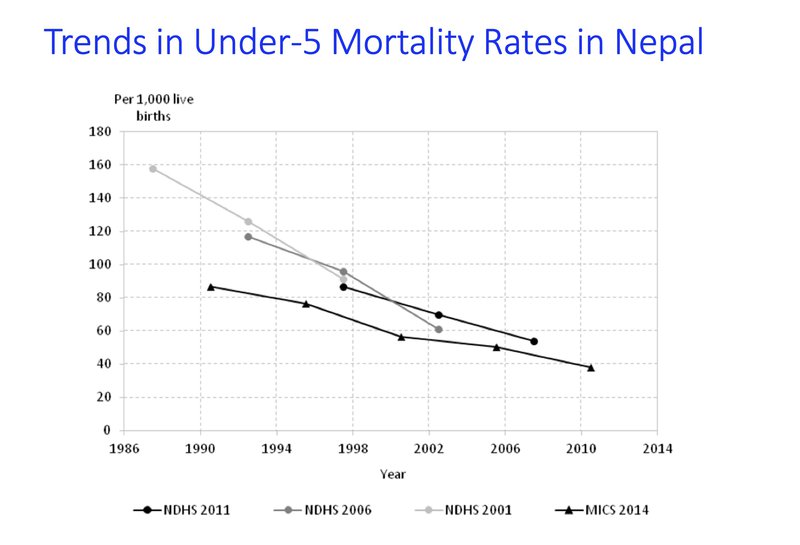 “Based on a calculation performed by the Population Council under this study, Nepal will become an ageing society around 2028– another 11 years counting from 2017, and an aged society around 2054 – another 37 years counting from 2017. It will therefore take 26 years for Nepal to transit from an ageing society to an aged society. This speed of ageing is very fast and more or less the same as that of Japan, which is one of the fastest ageing societies among the member countries of the Organization for Economic Co-operation and Development (OECD),” said the summary report.

Nepal is not alone, all the countries in South Asia will reach a similar situation from a beginning of decline of population and structural changes in its composition towards less number of children and increase in elderly population. According to experts, some countries like Afghanistan and Pakistan may take a bit longer, they will also face same problems.

“Based on my own experiences in Japan, it unfortunately takes a long time for the concerned societies to realize the real meaning and implications of this critical phenomenon and start taking necessary actions. The Government of Japan mentioned forthcoming rapid population ageing in its “Population White Paper” way back in 1960s, but it was not until 2000s when the nation started to realize (and actually feel) how this impacts our lives in a very tangible and serious manner. Now we are struggling with the consequences of our delayed actions, missed windows of opportunity and wasted years, whereas there are countries like France and Sweden which have been coping with it at least comparatively successfully,” Tomoo Hozumi, UNICEF Representative to Nepal.

“Unlike many other socioeconomic events, demographic changes are not “dramatic” in a short run so do not easily catch people’s attention including mass media’s headlines. But it is pretty much the only macro trend in our society that one can make credible and reliable forecast based on scientific methods unlike economic ups and downs and political development of nations.” 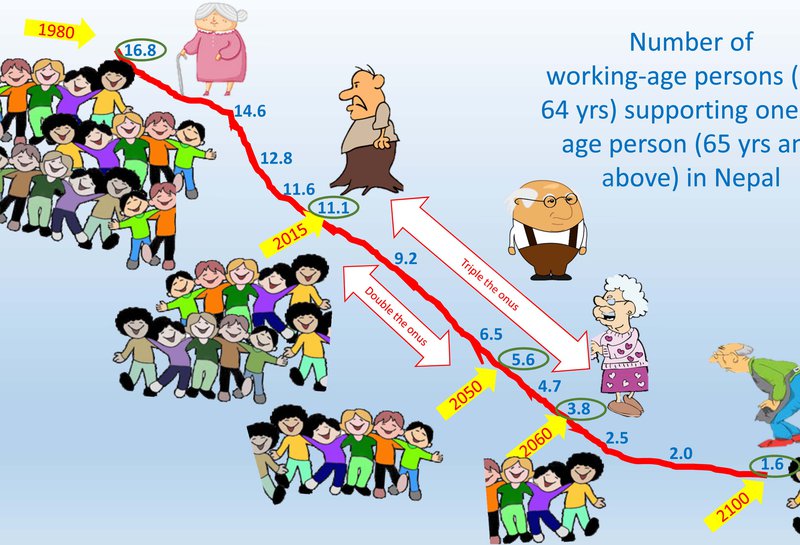 According to him, just like constant trickle of water drops can eventually pierce a hole on a slate of stone after years, it is gradual but sure to come. The only difference for countries like Nepal (and many other countries in Asia) is that the process would proceed much faster than what a majority of today’s industrialized countries experienced. In fact, it would be like riding on a roller coaster. In this context, I believe media has an extremely important role to play to explain this phenomenon and its implications in a manner that can be understood by people of all walks of life and induce necessary actions in timely and effective manner.

In East and Southeast Asia, the process of aging is even faster. According to study, Vietnam is transmitting from an aging society to aged society within a matter of 18 years, Thailand in 20 years and China in 22 years compared with Japan’s 24 years). In that sense, this is a common challenge for entire Asia.

Asian Development Bank in its report says that the demographic dividend that contributed substantially to economic growth in developing Asia in the past, is dissipating. Population aging affects growth through savings, capital accumulation, labour force participation, and total factor productivity.

“We examined the impact of aging on those four channels in 12 developing Asian economies that collectively make up the bulk of the region’s population and output. We then made projections about the effects of demographic change on the economic growth of the 12 from 2011 to 2020 and from 2021 to 2030. Our results indicate that there will be a sizable adverse economic impact where population aging is more advanced,” said ADB’s report Impact of Population Aging on Asia’s Future Growth.

Various researches undertaken by other agencies have also indicated this. Conducted by Marie Stopes Nepal on Youth Friendly Sexual and Reproductive Health (SRH) Services with support from Australian Aid a few years ago, an exploratory study on the SRH experiences and needs of young people in Nepal reveals that the age 18-19 is a common age for first sex in Nepal. The research also revealed that there is a high demand of abortion without understanding the implications on health.

Most of the youths are aware, but it’s use is alarming among few of them although the contraceptives are available easily in all facilities and costs range from NPR 60-200, with Econ and I-Pill popular brands or as 72 hour pill.

This transition itself is an extremely positive outcome of the country’s development and something to be celebrated – as an alternative scenario to it would have been that of classical ‘population explosion’, i.e. uncontrolled population growth with persistently high prevalence of poverty and under-development.

At the same time, as in the life of individual human being, achievements in one stage of country’s development often bring new challenges in the next. Looking at Nepal’s development in this perspective, there are two major challenges that the country needs to be quickly prepared for; (1) rapid progress of ‘aging’ of the society; (2) duration of the‘demographic window of opportunity’ period which is not particularly long compared to other countries with more advanced economies. This study provides various analyses on them and examines their implications for the country’s macro development policies.

The report also showed how demographic structures have been changing in Nepal. Conventionally, an ‘aging society’ is defined as a society where the percentage of people aged 65 years and above (so-called ‘old-age dependents’) accounts for 7 per cent or more of the total population. When this proportion doubles (that is, 14 per cent or more), the concerned society is called an ‘aged society’. Based on a calculation performed by the Population Council under this study, Nepal will become an aging society around 2028– another 11 years counting from 2017, and an aged society around 2054 – another 37 years counting from 2017. It will therefore take 26 years for Nepal to transit from an aging society to an aged society. 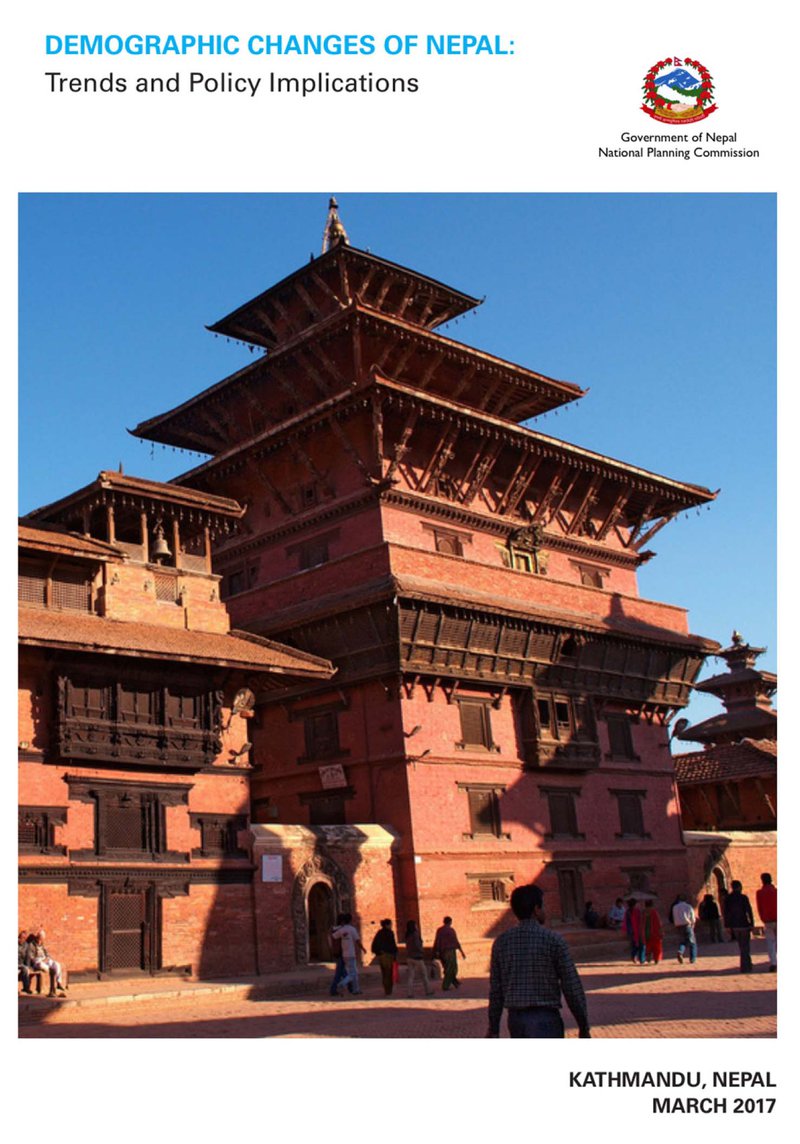 Japan went through the same transition process in 24 years between 1970 and 1994. It is also much faster than what today’s industrialised countries had historically experienced: 115 years for France; 85 years for Sweden; 47 years for the UK; and 40 years for Germany. There are many socio-economic implications of this rapid change. One of them is that the onus for working-age people (conventionally defined as those who are aged between 15 and 64 years) to support old-age dependents in the Nepali society will increase substantially in the coming decades.

According to the calculation of this study, as of 2015, 11.1 working-age people are supporting one old-age person in Nepal. By 2050, 5.6 working-age people will need to support one old-age person, which is half of today's ratio in another 33 years counting from 2015. By 2060, this ratio becomes 3.8 working-age people per old-age person – one-third of today's ratio in another 43 years counting from 2015. This will only be possible if children today and subsequent generations to come are raised to become far more productive than today’s adults by the time they grow into adults themselves. This in turn, necessitates prioritized investments in children today for their healthy and sound growth both physically and mentally.

The ‘demographic window of opportunity’ is a period of time in a nation’s demographic evolution when the proportion of working-age population is particularly prominent. This occurs when the demographic architecture of a population becomes younger and the percentage of people who are able to work reaches its height.Countries which put the right policies in place and necessary investments to back them have been able to effectively take advantage of this opportunity and reap their demographic dividends in the form of accelerated human development and economic growth. 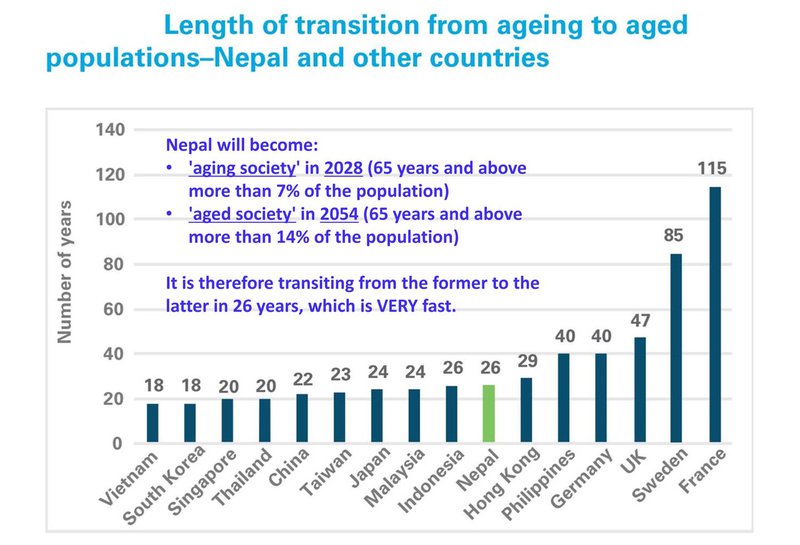 More specifically, Nepal needs to invest in children on a priority basis now, particularly in such areas as Health; Nutrition; Water, Sanitation and Hygiene; Education including Early Childhood Development; Child Protection; and Social Protection.Doing so is not a matter of charity or adding a ‘soft’ side to economic development but is fundamental for the country to take the maximum advantage of favourable conditions in the remaining period of its demographic window of opportunity for its development and cope with the challenges of coming agingand aged society.

To be sure, what Nepal requires in this context is NOT mere ‘children in number’ based on simple pronatalistic policies but children who are raised to their fullest potential to be able to move the society forward. The fact that the number of children born has started to decrease also provides a great opportunity for the country to increase the amount of investment per child within a given fiscal space, which in turn will lead to services of better quality for children in the concerned issue areas and their enhanced development.

Demography is not destiny. At the same time, it sets clear and strong parameters within which countries need to make conscious decisions and take actions in a time-bound manner to make the best of given stuation in one demographic stage and be prepared for opportunities and challenges in the next.

Based on the above-mentioned analyses, it is right, justifiable and necessary to consider the investment in children as an act of ‘paying forward’ to the generations who will support us in our old age and continue to develop our society in the future – just as the concept and practice of old-age benefit has been well accepted by now as a legitimate act of ’paying afterward’ to those people who have worked hard and supported us in our young age. The result of the analyses in this study shows that this perspective is required for the macro development discourse in Nepal today.

(The story is based on the report, courtesy to National Planning Commission, UNICEF and the Population Council (2017), Demographic Changes of Nepal: Trends and Policy Implications, New York, Population Council.)