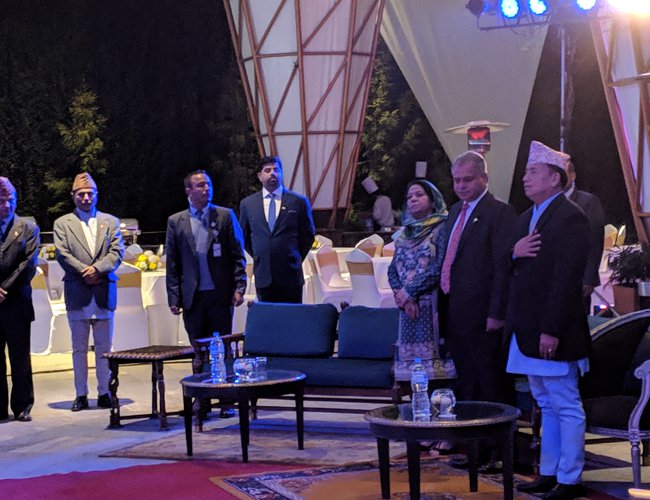 Nanda Bahadur Pun, Vice President of the Federal Democratic Republic of Nepal, was the Chief Guest of the occasion.

A large number of dignitaries and officials from the Government of Nepal, leaders of political parties, resident Ambassadors, heads of regional and international organizations, representatives from civil society and business community, as well as professionals from various fields attended the function.

In his Welcome Remarks, the Secretary General expressed sincere gratitude to the Vice President for gracing the event with his august presence. He also welcomed the guests to the function.

In his address, the Secretary General said, “Over the last thirty-three years, SAARC has made steady progress toward socio-economic development in the region, which is fundamental to the promotion of the welfare of the peoples and improving their quality of life.”

He further stated, “endowed with vast human and natural resources, South Asia has immense potential. With sustained endeavors, we will surely be able to realize the region’s fullest potential. Essentially, therefore, SAARC is the beacon of hope and aspiration, and a matter of pride for all South Asians. SAARC is our common identity, our inspiration and our future.”

The Secretary General extended warmest felicitation to the peoples and Governments of the Member States on the auspicious occasion of the Thirty-fourth SAARC Charter Day.

During the First Summit in Dhaka, the Heads of State or Government adopted the Charter of SAARC on 08 December 1985, marking the beginning of a new era of regional cooperation in the history of South Asia.

Established with the primary objective of promoting the welfare of the peoples of South Asia and improving their quality of life, SAARC promotes regional collaboration in almost every aspect of development activity having a bearing on the life and livelihood of the peoples of the region.

The Thirty-fourth Charter Day of the South Asian Association for Regional Cooperation (SAARC) is being commemorated on 08 December 2018 in all Member States of SAARC.

Among other things, it has been customary for the Heads of State and/or Government or the Ministers for Foreign/External Affairs to issue messages to commemorate the Charter Day.

Leaders of all eight Member States of SAARC have issued congratulatory message on the auspicious occasion of the Thirty-fourth SAARC Charter Day.