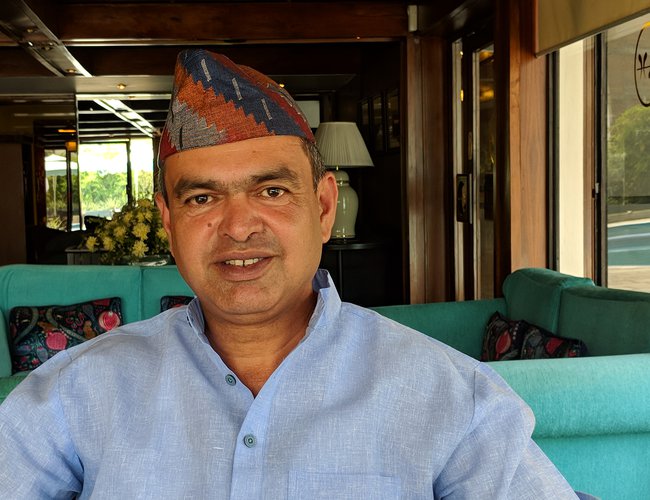 When Ujjwal Bikram Thapa learned that the family of Samjhana Kumari Das, an18-year-old girl, who was critically injured in an acid attack at Chandrapur Muncipality-6 in Rautahat district in September, were facing financially impossible task to bring her to a specialized hospital in Kathmandu, he immediately contacted them and made arrangements to bring the girl to a hospital in Kirtipur.

Along with late Samjhana, her sister Sushimta was also brought to the hospital for further treatment of the complicated acid burn.

This was not the first case for Thapa, a social worker, to help others. He has been offering all kinds of support, as much as possible, when the people in need come to contact him. He is always available for the needy.

“It is unfortunate that we were not able to save the life of Das despite our efforts,” said Thapa, a graduate from the Philippines. Born in Ratomata of Kamalamai Municipality, Ward 6 of Sindhuli District, forty-nine years old Thapa has been serving the people, who are poor and in difficult stage of life.

When Thapa saw that the parents of four months old Arbina Moktan of Maruwatar of Sindhuli were unable to invest money to operate the cataract of the child, he did not hesitate to help. He took the child and her parents to Tilganga Hospital for surgery.

“When I knew that the eyesight of the child would return after surgery, I decided to support the child. After a successful surgery, the sight of the child from both the eyes returned,” said Thapa. “It was one of the happiest moments of my life.”

He said that out of Rs.176,000 spent for the treatment, he contributed some and remaining amount was collected from the people. After knowing through the social media that nine years old Tara Khatri, who was suffering from blood cancer, was unable to go to hospital due to financial conditions, Thapa used his network and collected Rs. 676,000 in just four days. With this money, Khatri, from Marin of Sindhuli district, was undergoing treatment. “She did not need to face death due to lack of treatment and money,” said Thapa.

Eleven years old Abina Thapa told his parents that he was unable to move his right hand. With a labor father, and living with old grand–mother, Thapa, a resident of Gyanglekh-1 of Amle Sindhuli district, did not have the money to go for treatment.

The family came to social worker Thapa with a letter of request for medical treatment from the Rural Municipality. He took the boy to Birendra Military Hospital for check-up. The doctors diagnosed the boy had a mental disease.

“After a few days of mental counseling, the boy returned home alright.”

Although his works are mostly dedicated to the people of his district, he always supports the people from all of Nepal. He even supported a victim of US-Bangla air crash. He still remembers the support given to the family of a victim, late Abdhesh Yadav of Sarlahi district.

“After the accident, late Abdhesh’s father Ramnaryan was in Kathmandu without a penny in his pocket. Along with taking the body of his son, father Yadav was heavily overburdened by loan his son took to go to the Arab country,” said Thapa, who came to know the state of Yadav through the news.

“When I read that the whole family including the wife and his four months son had lost the guardian, I was shocked,” said Thapa, who immediately mobilized his network and collected Rs.196,000 within a day, remembered Thapa. “ Out of this, Rs.145,000 was paid as loan taken by late Yadav to go to the Gulf and Rs.51,000 to the family. I am very happy to say that Rs.13,100 was donated by day to day laborers of Kathmandu. Although this is a small amount, it is very significant.”

Son of late Mohan Bikram Thapa, a well known conservator, who worked for a long period of time under Ministry of Forest, Thapa, who is living in Kamalpokhari, has been a savior for Sindhuli district. He reached a village of the district suffering from natural calamities with relief packages within 24 to 72 hours.

Convener of Sindhuli Reconstruction Campaign, Thapa has also provided relief to 141 fire victims. In his initiative, 573 houses of old, disabled and helpless have already been reconstructed. Although he is currently a central committee member of Pashupti Sumsher led Rastriya Prajatnatra Party (Democratic), Thapa is neutral in carrying out the social activities. “I do have my political ideology but social work is universal.”

Thapa has also been organizing district-wide annual soccer tournament and T20 cricket in his municipality. As his village does not have an ambulance, he has already decided to donate a four-wheel ambulance to his village Ratamata in the memory of his father Mohan Bikram Thapa. His mother Urmila Thapa will dedicate the ambulance to the village.

Book On Nepal, India And China By A Correspondent 1 week ago

HIMALAYA SHUMSHER RANA Life At 94 By A Correspondent 3 weeks, 5 days ago

Book Nepal And The Great First World War By A Correspondent 1 month, 1 week ago

Nepal In Political Turmoil After PM Calls For New Elections, Writes DW By Agencies 2 months ago

GYEONGGI-DO AND SUNWON-SI: Tale Of Development By NEW SPOTLIGHT ONLINE 4 months, 2 weeks ago