Joining with Sajha Yatayat and Metropolitan Traffic, Zonta Club joins the 16-day campaign saying no to Violence against Women 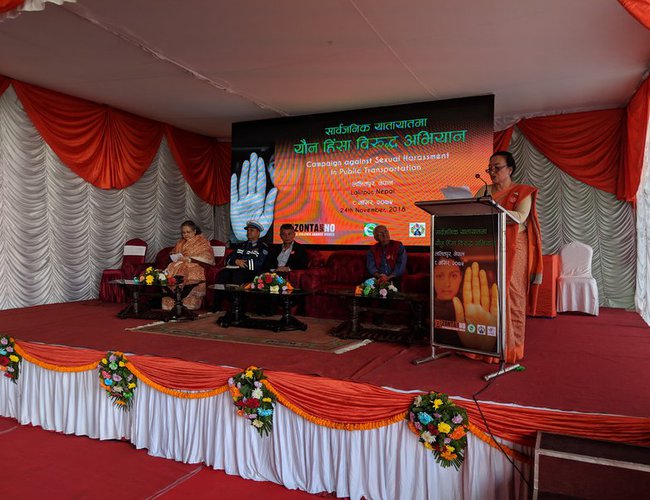 As in the past, Zonta Club has organized several different programs to celebrate '16 Days of Activism against Gender-Based Violence Campaign' from November 25 to December 10. This year’s slogan is end of Child marriage.

Zonta Club of Kathmandu is a legally registered NGO in Kathmandu working on the advancement of the status of women with the objective to improve the economic, education, health, and issues related to youth and violence against women at the national and local levels through service and advocacy

On November 24, 2018 ‘Campaign against Sexual Harassment in Public Transport’ was launched in presence of large numbers of people from different walks of life.

On the occasion of 16 Days of Activism against Gender-Based Violence Campaign’ — observed from November 25 to December 10 — the Zonta Club of Kathmandu also distributed badges to “raise awareness about the activism on Violence Against Women.”

“We believe in action to end all forms of violence against women. This year we are launching campaign focusing to end the girl child marriage,” said President Jyoti.

Renowned Women Activist Chadani Joshi, who spent decades advocating for gender rights as Regional Director of UNIFEM South Asia and now adviser of Sabah-Nepal, said that the understanding about domestic violence has increased in Nepal in the last two decades. She said that there still is the need to go a long way to end sexual and other forms of violence.

Senior Superintendent of Police and head of Metropolitan Traffic Police Basant Panta said that Traffic Police has been taking action against sexual violence against women in public transport.

Delivering the vote of thanks, chairperson of Sajha Yatayat and human rights activist and journalist Kanak Mani Dixit expressed the happiness over the response of the people against sexual harassment in public transport. He said that the success of the campaign will depend upon the level of awareness generation against sexual harassment in public transport.