Prospect of Nepal – Korea Relations in the Perspective of Trade, Tourism, Investment and Labour

Prospect of Nepal – Korea Relations in the Perspective of Trade, Tourism, Investment and Labour 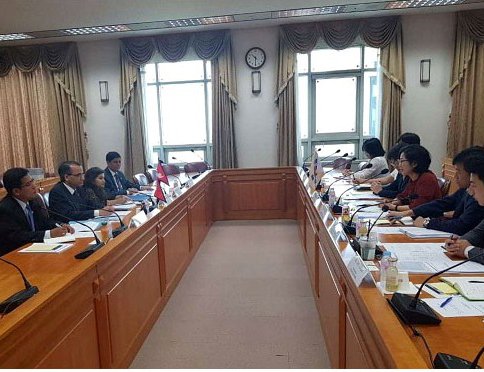 I am honored to have a good opportunity of speaking how to promote bilateral trade, investment and tourism.

As we are well aware, Nepal successfully conducted three tiers of elections in accordance with the New Constitution which was adopted on September 19, 2015. Nepal already secured political stability and now is the time to achieve economic prosperity.

Korea’s President Moon Jae-in visited Nepal twice on a personal trekking trip. During his last trekking to Langtang in 2016, he volunteered in the rehabilitation efforts of a school damaged by the earthquake in Nuwakot district. Against this backdrop, I am confident that Korea and Nepal can take the current business partnership up to a new level.

Nepal has the vision and potential. A new study by the World Bank and International Finance Corporation has pinpointed five priority sectors - tourism, agribusiness, education, health and information technology – that Nepal should focus on to boost sustainable investment and accelerate productivity for comprehensive economic growth.

Many people talk about the potential of Nepal but the more important thing is to how to materialize the potential into reality. Nepal is now making best efforts to achieve its goal of becoming a middle-income country by 2030. According to NPC (National Planning Commission), the country would require an investment of 17.7 billion US Dollars per year for the next 12 years to fulfill SDG Goals by 2030. The Nepali Government is especially relying on the private sector to bring much of the resources for investment.

The important thing at this stage is that private sector will have to invest 60% of the total investment for infrastructure in industry, energy, transportation, and buildings. But Nepal’s domestic economy does not have enough resources for large infrastructure projects. Hence, for attaining middle-income country status by 2030, Nepal would have to attract FDI as a source of technical expertise and financing.

There is good news. For the purpose of attracting foreign investment to bridge the funding and investment gap, the Nepali Government is working with international rating agencies to introduce the country’s sovereign credit rating, which will determine the risk of doing business in Nepal. A few years later, we will be able to see Nepal’s credit ratings such as Moody’s, Standard & Poor’s and Fitch Group.

However there are many obstacles for foreign investment in Nepal. Annapurna Post, the daily newspaper of Nepal, reported on December 3 that bureaucracy, lobbying of domestic private sector against foreign investors, lack of one-stop service, no trademark laws are the main reasons for slow attraction of foreign investment. Here I would like to add one more thing. Nepal talks about the potential of the hydro-power projects but foreign capital is not coming yet. Take an example. The Pakistan government is taking 100% of currency risk, while the Nepali government is demanding excessive burden on foreign developers.

Bilateral trade volume between Korea and Nepal is less than 100 million US Dollars. However, this data is misleading, since Samsung mobile phones or home appliances which are sold in Nepal are produced in either India or Southeast Asia. Although Korea’s FDI is small in Nepal, Korea’s investment is coming in manufacturing and service sectors.

I believe that there is great potential for expanding trade and investment between two countries. Korean embassy is making efforts to promote bilateral trade and investment. In late October, business delegation led by President of Smell & Medium Business Corporation Korea conducted the business tour to Nepal. Small and Medium Business Corporation Korea signed MoU with the Federation of Nepal Chamber of Commerce and Industry (FNCCI). I believe that the MoU on cooperation will serve as a stepping stone of facilitating business contacts among SMEs businessmen of both countries. Korean embassy also organized B2B meetings for 6 Korean companies last week. I hope that B2B meetings will reap the tangible results.

Nepal is best known to Koreans as home of the Himalayas, and the beautiful natural scenery. More than 34,000 Korean are visiting Nepal annually in order to go trekking or to visit Lumbini, the birthplace of Lord Buddha. There is great potential for attracting Korean tourists to Nepal. If Korean travel agents are allowed to provide tailor-made tour programs for Korean tourists, even more Korean tourists will visit Nepal, I believe

Lastly, I would like to mention Nepali migrants who are currently working in Korea. They are well regarded for their hard working mind-set and excellent Korean language skills. The Korean government appreciates their contributions to the economic development of Korea. The Korean government is keenly interested in industrial technology transfer. I had a few occasions to meet members of ANKUR, an organization of Nepali workers who have returned from Korea after having spent about five years. They wish to make use of the skills and technology which they have learned in Korea for the development of Nepal. Korean government will endeavor to find suitable ways to implement industrial technology transfer.

Excerpts of the statement delivered at Nepal Chamber of Commerce.