Construction of road is not just for physical connectivity or destruction of local environment, but it is also for livelihood improvement, environmental safeguard and economic prosperity. This is what Asian Development Bank’s South Asia Sub-regional Economic Cooperation (SASEC) Road Connectivity East-West-Highway-Kosi Bridge-East-West Highway road project has shown in Sunsari, Udayapur and Saptari districts of eastern Nepal. Along with road construction, the project has also launched livelihood and environment safeguard programs with the participation and involvement of the local community and elected representatives. The road project has shown how a road can bring economic prosperity in the local level, particularly women, if it is constructed side by side with livelihood components 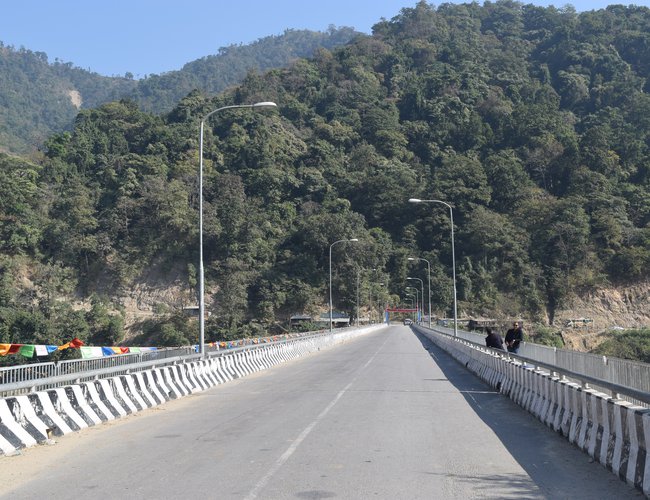 Tilak Bahadur Rai, a resident of Belaka Rural Municipality, Ward 8 of Udayapur district, does not have any word to describe the happiness over the construction of a bridge near his home at Kosi river and the highway connecting his village with Sunsari, Udayapur and Saptari.

There is a reason behind Rai’s joy as he has lost one of his sons in a boat that overturned in Kosi river in 2010. “Although I have lost my 19-year boy to Kosi, now no one else should lose their children, mother or father, while crossing Kosi by a wooden boat,” said Rai. “Had my son been alive, he would have seen our village turning from an isolated pocket of Kosi river to a place with the transport connecting it with the rest of the country and generating income from tourism activity and commercialization of agriculture.

“We have not got only the bridge and all-weather road but also got livelihood options under the project. With livelihood programs like commercial farming, poultry, beautician training, homestay and other market related training, people living in the area get enormous livelihood options.”

Constructed under SASEC Road Connectivity Project, East West Highway- Kosi Bridge-East West Highway, the 61.239-kilometer long road starts from Nadaha of Sunsari district and it passes through Rampur of Udayapur, Fattepur of Saptari and is linked to East-West Highway at Kanchanpur via Koshi bridge at Chatara.

Isolated from the rest of Nepal by road connectivity and known as a Karnali of eastern Nepal, Belaka, a village close to Kosi river, has benefited the most from the bridge and road. With a livelihood program directed at women, the project has supported economic empowerment of women.

Thirty eight years old Rita Devi Chaudhari of Pasaha of Saptakosi Municipality of Saptari district is making up to Rs.150, 000.00 ($1500) a year from producing vegetables. As she has started to make money from her vegetable farming, Chaudhari, mother of two children whose husband is working in Malaysia, does not have to wait for remittances to pay monthly tuition fees of her children. 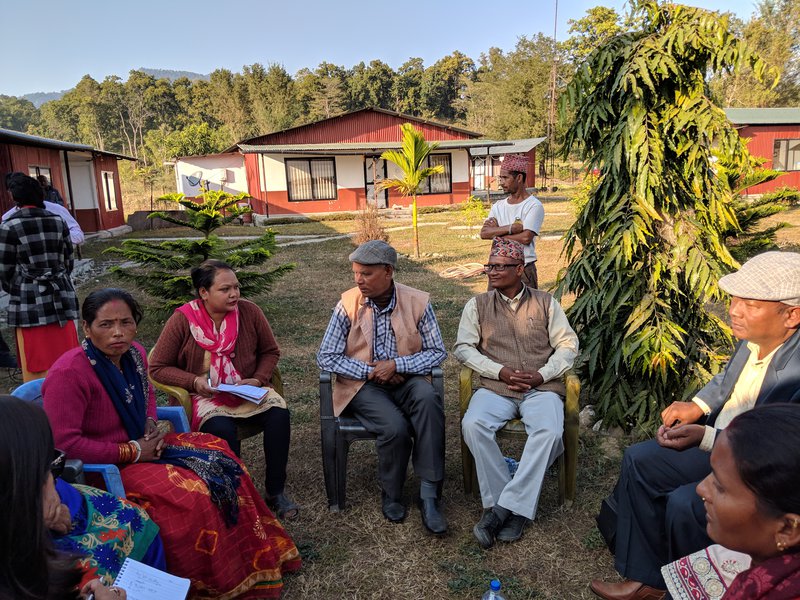 “My income is enough now to pay tuition fees of two children and to purchase other necessary stuff. I have also some savings in a local cooperative,” said Chaudhary. “Construction of road has brought us boon in our livelihood.”

Before introducing commercial vegetable farming, Chaudhary used to grow 1250 kilograms of rice in one session, which was barely enough to feed her family. Her husband went to Malaysia to supplement the farm income. “Now I have enough options to lure my husband back home. He is returning this year not to go for foreign employment again.”

Thirty-two years old Sunita Chaudhari has made a great success in the last two years in fishery. Chaudhary, a resident of Baluwa Village of Kanchanpur Municipality, has sold Rs.125,000 ($1250) this year. After returning from a foreign employment from Gulf, Chaudhari’s husband is now supporting her in fishery.

“As Integrated Development Service (IDS) provided additional fishes and both of us are now jointly working in fishery, what I can say is that our income will be double next year,” said Chaudhary.

Along with supporting the commercialization of agriculture, the project has also provided professional training for young women. Thanks to a natural guide training, twenty five years old Nanda Kumari Karki, a resident of Tapeswori of Belaka Municipality, is now working as a nature guide in Kosi Tappu Reserve.

“With over a dozen of homestay in surrounding areas, the number of tourists have increased. I am helping tourists visiting for bird watching in the Kosi Tappu,” said Karki, who was trained in Chitwan National Park.

With Koshi Tappu Wildlife Reserve within the periphery of the road, this road will likely play a significant role in future to develop the area for wild life tourism. According to Karki, there are now 20 home-stays under operation.

Constructed under Asian Development Bank’s loan of over Rs. 2.4 billion to avoid possible disturbances in future caused by a breach of Koshi Barrage like in 2008, the road and bridge component is also connecting Dharan-Hetauda road, which is now under construction.

Constructed by Nepali contractor CTCE-Kalika JV and completed in the schedule, the project also set a new record showing that timely and quality construction is possible in Nepal.

With beach in Koshi Barrage system in 2008, eastern parts of Nepal were cut off from the rest of the country for a long time, causing heavy economic losses. The opening of the bridge will avert any such situation in the future.

In many areas, highways come and go without much benefit to local people except for the purpose of connectivity. “Generally, land acquisition is always responsible for delaying the construction period. This was not an issue in this highway as people voluntarily agreed to provide the land,” said engineer of Department of Roads. “People voluntarily provided land during the expansion of the road even in the old town like Fattepur.”

With separate packages for social and health awareness, livelihood improvement and bio-diversity conservation activities, ADB has employed Integrated Development Service (IDS), a local NGO, to carry out these works.

“Asian Development Bank is happy to see the inclusive economic growth currently achieved under the SASEC project in three districts of Province 1 of Nepal. Nepal is benefiting from the SASEC Initiative. This road project is an example,” said Mukhtor Khamudkhanov, country director, Nepal Resident Mission, who also visited the project site.

Initiated in 2000, SASEC is a flagship ADB Supported Program with the participation of Bangladesh, Bhutan, India and Nepal. Under the program, ADB has been promoting sub-regional cooperation and integration of four countries.

“During the project period, over 5600 community people, including 65 female and 35 male members, benefited from the interventions. Out of 139 persons trained through the skill development training, 90 persons are running their enterprises and more enterprises are waiting to open,” said Chote Lal Chaudhary, team leader of IDS. “We have also trained over 100 women natural leaders to lead the social issues from community learning centers. Along with providing training, we were also able to organize 24 buffer zone groups to protect the natural habitat of Koshi Tappu and its surroundings.”

With the construction of road, there is also a boom in the land prices and property. According to the local residents, the value of land has increased from between 5 and 8 times in each rural business center. According to Chaudhari, the land price was Rs.250,000 per kattha, which is now almost Rs. 2 million. During the period of construction, 585 new houses have already been constructed. The road has also lured auto-rickshaws and local buses.

Along with 191 new hotels, 5 gas filling centers were also opened. There are 10 Micros leaving daily between Kathmandu and Fattepur, Rampur, Beltar and other road head points.

With its sensitivity towards environment protection, Asian Development Bank has also given a high priority to protection of natural environment of road areas. Under the support of ADB, local NGO IDS organized a series of programs to decrease the human wildlife conflict in Koshi Tappu Wildlife Reserve (KTWR). In coordination with KTWR and National Trust For Nature Conservation, IDS has launched numbers of programs in buffer zone areas of Udayapur and Saptari districts to raise awareness among the communities.

“As the road goes in the periphery of the KTWR, ADB has made utmost efforts to preserve the eco-system and nature of KTWR. Under the project, a jeep has been donated to the project to patrol the field sites against illegal cutting of trees and poaching of wild animals, monitoring hotspots of biodiversity and rescue dolphin,” said Chaudhary. After the support from the project including to fence solar electric bar and increasing the number of patrol post, the number of incidents of conflict between human and wild animals has gone down. 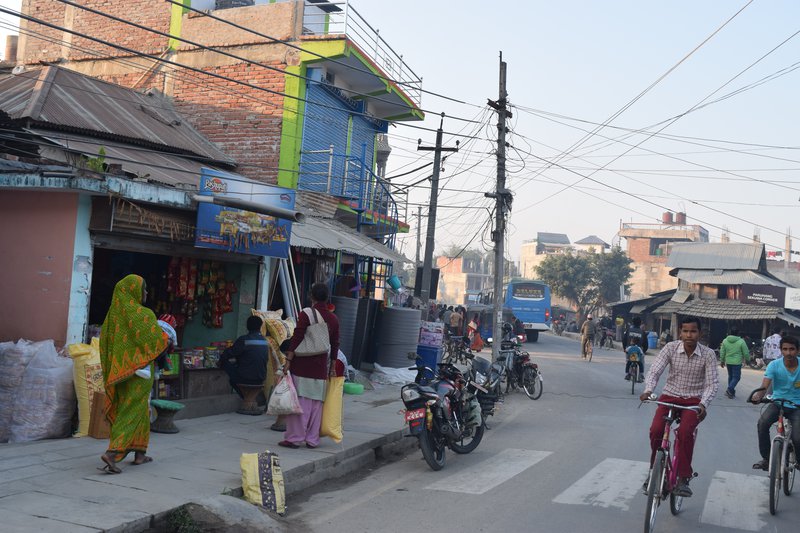 As the road lies within the periphery of wildlife reserve, the protection of wildlife is also one of the most important components. Through IDS, ADB also supported the establishment of bio-diversity corridor, road side plantation and private plantation. “Biodiversity corridor of wild-elephant was enriched through community plantation in 11.05 hectares in three community forests, roadside, private land and school compound,” said Taradevi Basnet, Chairperson of Community Forest User Group of Belka Municipality ward 1. “With the growing demand, we are supplying plants for plantation.”

Including the livelihood components, the road project has also economically uplifted the marginalized and poor communities, particularly women, giving them permanent sources of income. This is likely to prevent migration in the future.

At a time when Nepal has been facing growing disputes in land acquisition, non-cooperation of local community and issue of environmental safeguard, ADB’s road project shows a way out for future project developments in Nepal directed at the benefit of the local community.

Diplomacy Changing Guard By A Correspondent 1 week, 6 days ago

Resignation of Prime Minister Padma Shamsher and the Fate of his Constitution By Dr. Bipin Adhikari 2 weeks, 1 day ago

Resilience And Poverty In Kathmandu: The Story Of An Encounter By Benoît Clémencin 2 weeks, 2 days ago