Screen Time For Children Need Not Be Curtailed: Study

Screen Time For Children Need Not Be Curtailed: Study 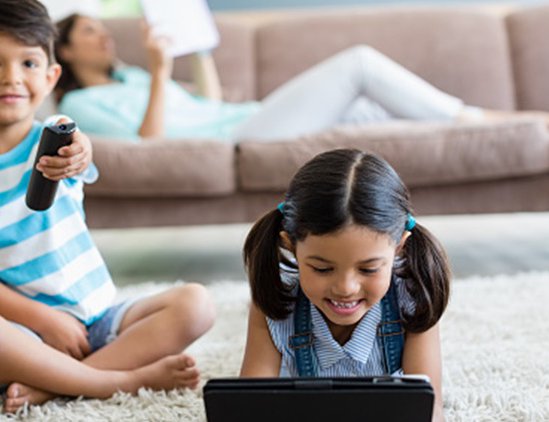 Staring at a screen has not been exactly advisable for children. But a new study has inferred that there is little evidence to back this up. The study, as quoted by BBC, states that while setting time limits for screen time is not recommended, devices must not be used at least an hour before bedtime. It is important, experts say, to follow a healthy lifestyle and not let using devices take the time up for exercise or sleep.

The study was published in the BMJ Open medical journal and stated that there are no substantial shreds of evidence to suggest that time spent before a device can be toxic, even if a link between screen time and depression and obesity was identified in the review. However, it is not exactly clear whether people who are depressed spend more time before the screen or vice-versa.

The Royal College of Paediatrics and Child Health (RCPCH), which oversees the training of specialists in child medicine, came up with a guidance for under-18s, the review of which was conducted and carried out by experts at University College London.

The college said that it did not set time limits for children because there was not enough evidence that screen time was harmful to children’s health at any age. Other than setting a screen time, it has been suggested that families should take cognisance of matters like whether or not screen time interferes with their child’s sleep cycle, or if or not one can control binging on snacks while at it.

“We want to cut through that and say ‘actually if you’re doing OK and you’ve answered these questions of yourselves and you’re happy, get on and live your life and stop worrying,” Dr. Max Davie, an officer for health promotion for the RCPCH said.

As reported by BBC, Dr Davie added: “When it comes to screen time I think it is important to encourage parents to do what is right by their family. However, we know this is a grey area and parents want to support, and that’s why we have produced this guide. We suggest that age-appropriate boundaries are established, negotiated by parent and child, that everyone in the family understands.”

WHO Advice For International Traffic In Relation To The Outbreak Of The Novel Coronavirus 2019-nCoV By NEW SPOTLIGHT ONLINE 2 days, 17 hours ago