A bus knocked down an unidentified around fifty years old woman. She died at Nepal Medical College, Attarkhel Kathmandu during the treatment. Bus and Bus driver is under police custody.

Sahid Tamang, 29, a resident of Chagunarayan municipality-4 died at Yuwamura Hospital, Sallaghari during the treatment. Shekbahadur Tamang, 27, ridding as a pillion was seriously injured and receiving treatment at same hospital. Accident occurred due to speeding.

According to Central News Desk of Nepal Police, Ramu Budamagar, 22, a resident of Puthan died on the spot when a tractor over turned at Dang Ghorahi road.

Sushilkumar Pal, 24, a resident of Siraha Aarnma rural municipality-1 died at Zonal Hospital Inarwa during the treatment and Suraj Paswan, 22, riding as a pillion was injured and receiving treatment at Mangalam Hospital. Accident occurred due to speeding.

Seven Killed And 13 Injured In Truck Accident In Dhading By NEW SPOTLIGHT ONLINE 2 days, 16 hours ago

Fourteen People Killed In A Road Accident In Baglung By NEW SPOTLIGHT ONLINE 1 month, 3 weeks ago 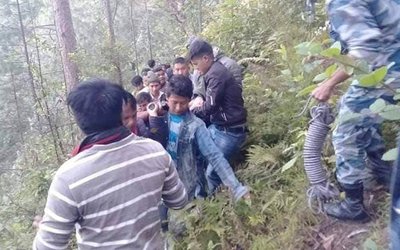 15 Persons Killed In A Bus Accident In Arghakhachi District By NEW SPOTLIGHT ONLINE 1 month, 4 weeks ago