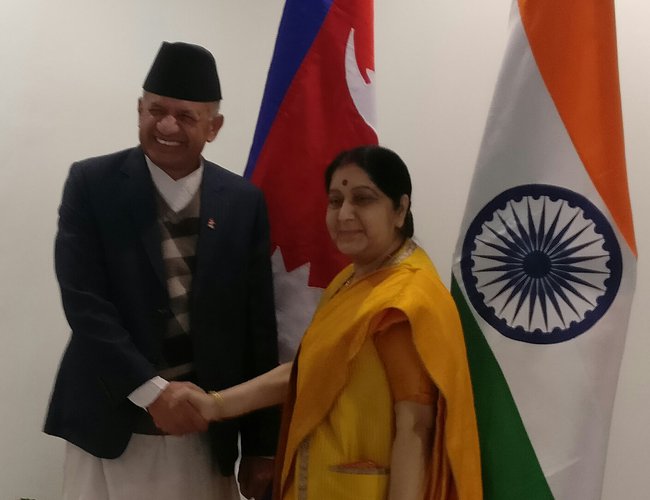 Minister for Foreign Affairs Pradeep Kumar Gyawali held a meeting with the Minister of External Affairs of India Sushma Swaraj at the latter’s office in New Delhi today.

According to a press release issued by Embassy of Nepal in New Delhi, during the meeting, the two leaders exchanged views on various aspects of Nepal-India relations while reviewing progress on the ongoing bilateral cooperation projects. They noted with satisfaction the progress made in several areas and underscored the need to continue the momentum. They recalled the exchange of high level visits in recent times and appreciated that these visits contributed to enhancing the age-old bilateral relations on the basis of equality, mutual trust, respect and mutual benefits.

Both Ministers agreed to hold the fifth meeting of Nepal-India Joint Commission in Nepal at an earliest convenient date.

The External Affairs Minister of India hosted luncheon in honour of the Minister for Foreign Affairs and accompanying officials that included Chargé d'affaires a.i. of the Embassy of Nepal in New Delhi, Joint Secretary (South Asia Division), Ministry of Foreign Affairs and other officials.

The Foreign Minister arrived in New Delhi this morning in order to participate in the fourth edition of Raisina Dialogue as one of the keynote speakers. He is scheduled to address the Dialogue in a short while.

Madhesh Based Party Demand To Include Its Agenda In The Amendment By NEW SPOTLIGHT ONLINE 6 hours, 14 minutes ago