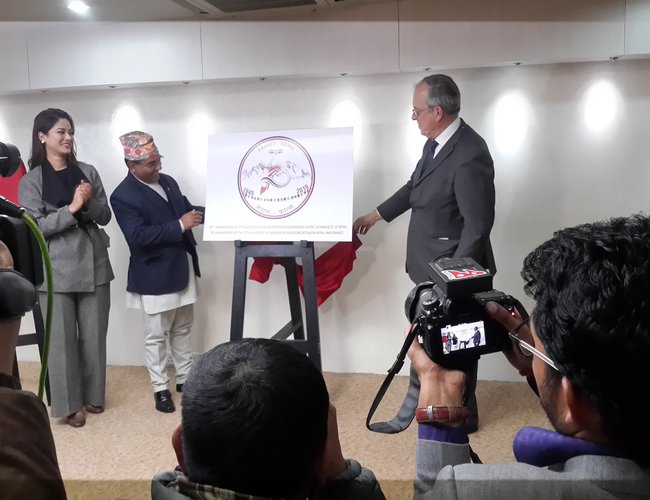 Nepal and France launched the commemorative events to mark the 70th anniversary of the establishment of diplomatic relations between Nepal and France. The Secretary-General of the French Ministry of Europe and Foreign Affairs Maurice Gourdault-Montagne visited Nepal to launch historic program.

The Secretary-General of the French Ministry of Europe and Foreign Affairs Maurice Gourdault-Montagne completed his official visit in Kathmandu. He visited Nepal at the invitation of his Nepali counterpart, Foreign Secretary Shanker Das Bairagi.

During his visit Gourdault-Montagne and Bairagi led their respective delegations to Nepal-France bilateral consultations held at the Ministry of Foreign Affairs, Singhadurbar, Kathmandu. The two sides discussed bilateral, regional and multilateral issues of mutual interest in the consultations. 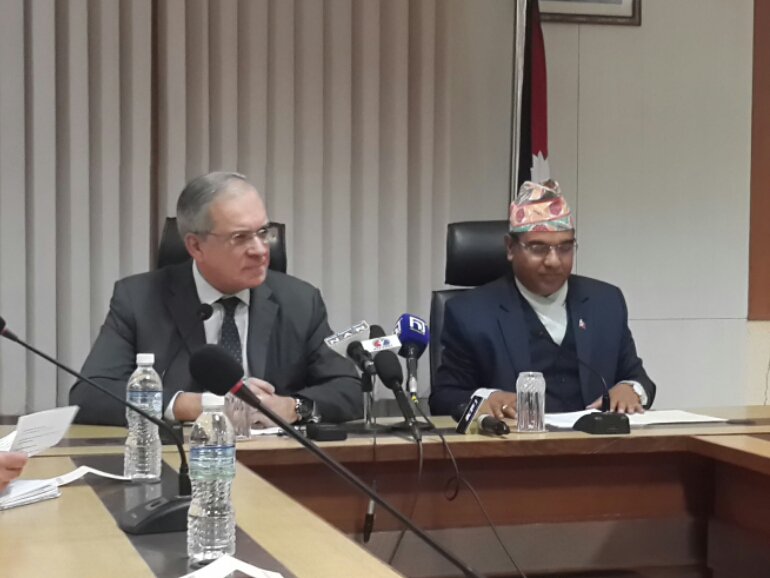 They exchanged views on common values shared by both countries in their foreign policies and actions, as well as their preference for multilateralism and the rules-based international order. They also emphasized the need to look ahead and to address common global challenges including social inequality, climate change, threat to multilateralism and developmental issues such as trade, investment, tourism, transportation, access to digitalization, environment etc.

Following the consultations, a joint press briefing was organized in the Ministry. On the occasion, Shrinkhala Khatiwada, Miss Nepal 2018 and Top 12 Contestant of Miss World 2018, was appointed the Goodwill Ambassador for the commemorative events marking the 70th anniversary of the establishment of diplomatic relations between Nepal and France.

The letter of appointment was handed over to Khatiwada jointly by Gourdault-Montagne and Bairagi. Her association with the anniversary is expected to contribute to reaching out to a wider public audience, especially the youth in conveying a message of goodwill, friendship and cooperation between the two countries.

A special commemorative logo designed by Aayush Kunwar, a student of Ecole Victor Hugo Manjushree Vidyapith, was also unveiled during the press briefing. The French Ambassador to Nepal François-Xavier Leger explained the rationale behind launching the logo and its selection process.

Secretary-General Mr Gourdault-Montagne will also pay a courtesy call on the Minister for Foreign Affairs, Hon. Mr. Pradeep Kumar Gyawali, during this visit.

The Secretary General's visit was a part of the celebration of the 70th anniversary of the establishment of diplomatic relations between Nepal and France (established on 20 April 1949). The French Embassy in Kathmandu in collaboration with the Ministry of Foreign Affairs of Nepal will be organizing various events throughout 2019 to mark and celebrate the 70th anniversary.

Madhesh Based Party Demand To Include Its Agenda In The Amendment By NEW SPOTLIGHT ONLINE 6 hours, 24 minutes ago