Rally held in support of Dr Govinda KC In Kathmandu

Rally held in support of Dr Govinda KC In Kathmandu 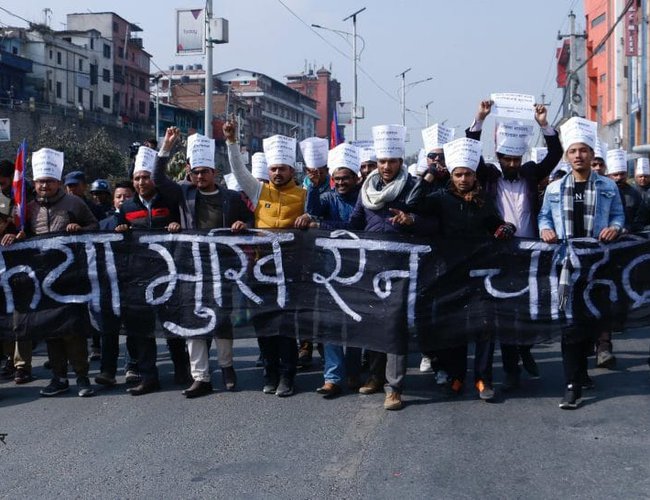 A rally was taken out in Kathmandu today in support of Dr. Govinda KC, who has been staging hunger strike for the past 13 days seeking reforms in the medical education sector.

After his health condition worsened, Dr KC who had started his 16th fast-unto-death at a house in Phugachhi, Ilam Municipality-7, was shifted to Tribhuvan University Teaching Hospital in Kathmandu. He is currently undergoing treatment at TUTH.

Dr KC had resorted to his 16th fast-unto-death from January 9 after the Education and Health Committee under the Federal Parliament had endorsed a medical education bill going against the previous agreement with him.

Meanwhile, a youth Bijaya Thapa who had also started a hunger strike in Ilam eight days ago, seeking passage of the bill through the Federal Parliament without bowing to Dr KC’s pressure, was also taken to Kathmandu this morning. After being airlifted via a Nepali Army chopper at around 10:00am, he is also undergoing treatment at Trivhuvan University Teaching Hospital.

Holocaust Education And Remembrance In Nepal By NEW SPOTLIGHT ONLINE 1 day, 17 hours ago