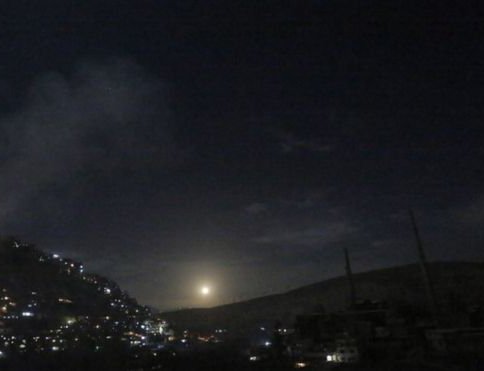 The Israel Defense Forces (IDF) says its operation is against the Quds Force - elite units of the Iranian Revolutionary Guards.

It provided no details. But there are reports of strikes around the Syrian capital Damascus early on Monday.

Syrian media say air defences have repelled "an Israeli aerial attack". On Sunday the IDF said it had intercepted a rocket over the Golan Heights.

What do we know about the operation?

The IDF announced the start of its operation in a tweet early on Monday.

The UK-based Syrian Observatory for Human Rights (SOHR) says Israeli rockets were targeting "the vicinity of the capital Damascus".

Witnesses in Damascus spoke of hearing loud explosions in the night sky. The extent of the damage is not clear so far.

The operation comes after Israeli said that "a rocket was fired at the northern Golan Heights and was intercepted by the Iron Dome Aerial Defence System".

The popular winter tourist site on Mount Hermon in the Golan Heights was closed as a result.

Israeli Prime Minister Benjamin Netanyahu issued a warning during his visit to Chad on Sunday.

"We have a set policy, to target the Iranian entrenchment in Syria, and to harm whoever tried to harm us," he said.

Israel rarely admits carrying out attacks on targets inside Syria.

But in May 2018, Israel said it had struck almost all of Iran's military infrastructure there in its such biggest assault since the start of the Syrian civil war in 2011.

Situation In China-India Border Area Is Stable And Under Control: Chinese Foreign Ministry By NEW SPOTLIGHT ONLINE 3 days ago

Japan To Lift State Of Emergency For All Areas By NEW SPOTLIGHT ONLINE 5 days, 23 hours ago